General Hospital (GH) Spoilers: Will Jason Settle Down With Sam or Liz – Who Really Deserves To Win Their Man? 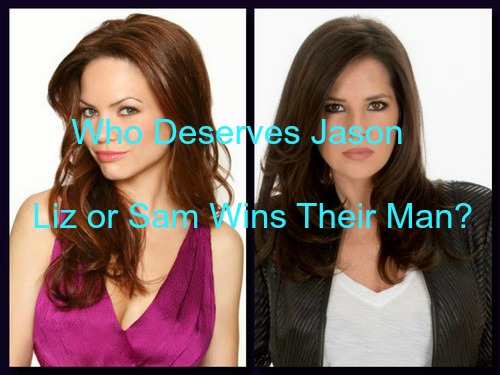 “General Hospital” (GH) spoilers tease at a reunion of both Jason Morgan (Billy Miller) with Liz Webber (Rebecca Herbst) and also with Sam Morgan (Kelly Monaco). These are likely not conflicting spoilers, but reflect the dilemma Jason faces and his waffling between the two women.

In coming days, Jason will have more memories return of his past life with Sam – and these memories will be more than just images, but will also trigger emotions. The problem is, these recollections and feelings from the past will have to do battle with those of Liz from the present.

Will the older memories of life with Sam from a couple of year ago be able to stand up to the love he’s had with Liz this year? Is Jason in a position emotionally to choose between the two of them? Jason is in a tough position as he’s caught between Liz and Sam.

Sam and Liz are on equal footing in most aspects. Both have kids with Jason, both have been with him, not been with him, been engaged or married to him, been loved by him and left by him, and have significant history with him.

Both have also lied to him, betrayed him, and angered him. Neither woman has clean hands in this fight. So which one should win him? As far as the law goes, Sam has him right now – she’s legally still his wife. But he’s got divorce papers ready to go.

Really, it doesn’t matter what Sam or Liz want. It’s all down to what Jason will do and who he will choose to do it with – or not. GH spoilers indicate that Jason will move out of the MetroCourt soon and into a new place to live.

If he goes back to the penthouse, that will spark more memories of life with Sam. Will he get a new place, though, so there’s no history there and no pressure to recall it? Sam and Liz also have to realize they are not the only ones pulling at Jason.

Carly Corinthos (Laura Wright) will apply increasing pressure in coming weeks for Jason to be the BFF of years gone by. Not only that, but Carly wants Jason in Sonny Corinthos’ (Maurice Benard) life. But Jason doesn’t like Sonny’s dirty business dealings and will balk at this.

All of them may be surprised at the decisions Jason makes in coming days. Will he push back on all of these people and redefine the new life that he wants? The safe bet is on no one making Jason do something he doesn’t want.

Jason seems to be able to fend off guilt and manipulation pretty well and he’s figuring out the man he wants to be – and it’s likely not a mob enforcer living a life of danger. GH spoilers indicate that Jason’s future will have much more to do with ELQ than the cartel.

So which woman deserves to share Jason’s new life? Is it Liz or is it Sam? The answer is complicated – it’s both and neither. Realistically, one is much the same as the other – although GH fans are deeply divided between the two women.

Both have done wrong, both have done right, both have given him a child and both offer love and passion. The real problem with Sam and Liz, either one, is that they both come with baggage – and that baggage is the other woman.

Both women will always be in Jason’s life because they each have a child with him. But if he chooses one, he’ll always have to deal with the anger of the other. Who wants that? Liz and Sam’s antipathy to one another may end up costing both of them a shot with Jason.

The question isn’t whether Liz or Sam deserves Jason but whether he deserves the hassle of dealing with them. Can Liz and Sam give Jason the space and peace of mind to decide what he wants when it comes to love in his life?

Share your thoughts in the comments below and come back to CDL often for tons more “General Hospital” spoilers, news and updates.