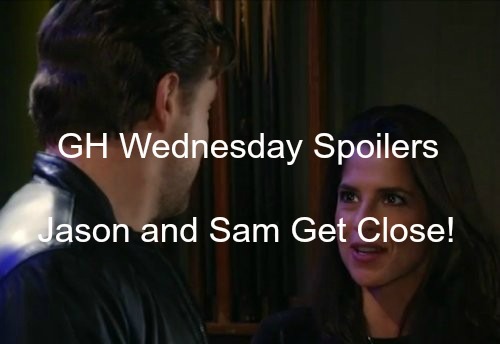 “General Hospital” (GH) spoilers for Wednesday, December 30 show Morgan in danger, a proposal, Jason and Sam close, and much more. Check out these GH spoilers for New Years’ in Port Charles at The Floating Rib, Haunted Star and more.

Morgan Corinthos (Bryan Craig) is acting out again although he has the best of intentions. Morgan wants to help Sonny Corinthos (Maurice Benard) with his Raj the gunrunner problem so he heads to the docks to wait until the arms deal goes down so he can spy on it for his dad.

Of course, this will not work out the way Morgan has played it out in his head. While Morgan bides his time before going to the mob meeting, he hangs out at the Floating Rib. Michael Quartermaine (Chad Duell) is there as well.

Michael wants to know why Morgan is there – will his brother tell him about the arms deal he’s going to spy on? If so, Michael might call his dad Sonny to give him a heads up. Carly Corinthos (Laura Wright) is freaking out over one of her sons, but which one?

Carly is shocked by something she sees and talks to Sonny and Dante Falconeri (Dominic Zamprogna) about her worries. Is it Morgan’s bipolar that’s got her on edge or Michael’s baby mama issues – will she tell Sonny about due date of the baby not being what they thought?

When Morgan gets himself in trouble over the gun deal, who will save him? Jason Morgan (Billy Miller) is also at the Rib – could he help out the Corinthos clan again? Later, Jason will hang with Sam Morgan (Kelly Monaco) and talk about his past.

Closer to midnight, it looks like Sam and Jason get close and might kiss. Could that spark yet another memory? Looks like Jason’s brain is starting to process and recall many things from his past he never thought he’d get back.

Over at the Haunted Star, Johnny Zacchara (Brandon Barash) does not want to miss a chance to make the most of New Years with Lulu Spencer (Emme Rylan). He’s planning on attending the party but Lulu is worried he’ll be arrested, so he puts on a disguise to get through the night.

Later, Johnny will put the moves on Lulu but will she be interested and kiss back? Lulu just insisted that she wanted Dante back in her life, but will the romance of New Years’ catch her off guard? Any chance that Dante might show up and see her kissing Johnny?

Nina Clay (Michelle Stafford) has a favor to ask of Curtis (Donnell Turner) who is more than happy to comply. But what does Nina wants? Also, what is Franco (Roger Howarth) up to? He’s also down on the docks and hands a large envelope to a stranger.

Is Franco plotting against Julian Jerome (William deVry) because he suspects him of tricking Nina with the Crimson editor position? GH spoilers indicate that Franco will set Julian up to try and expose whatever seedy secrets he’s keeping but it may backfire.

Franco’s other plan for New Years’ aside from protecting Nina is bedding her. Will those two finally get intimate or is Kiki Jerome (Hayley Erin) going to bust in again and ruin their romance? Fingers crossed that Nina finally gets her man.

Finally – there’s the Scorpio-Drake proposal. GH spoilers teased that Patrick Drake (Jason Thompson) would propose to Robin Scorpio (Kimberly McCullough) on New Years’. But does Robin flip the script and propose to Jason instead?

Looks like there will definitely be a proposal but it won’t be the one we were expecting. Also, Robin takes Patrick to bed. Boy, she’s not wasting any time now that she’s out of captivity. New Years in Port Charles is not to be missed!

Remember, Wednesday December 30 is the last new GH of the week. Thursday’s show is a rerun of the December 2 episode where Jason tells Liz he still wants to get married and Maxie brings Dillon in to work at Crimson. Friday there’s no show due to bowl games.

But CDL is here all week long with tons of “General Hospital” spoilers, news and updates so you have all the GH you need!