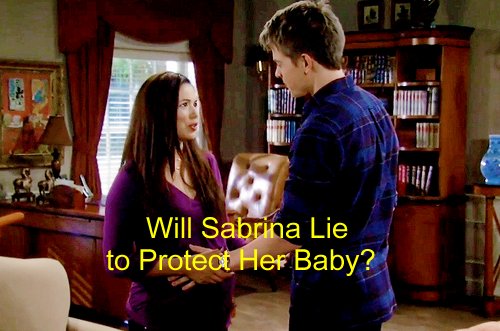 “General Hospital” (GH) spoilers reveal Sabrina Santiago (Teresa Castillo) may not come clean to Michael Quartermaine (Chad Duell) about the paternity of her baby now that Carlos Rivera (Jeffrey Vincent Parise) is back in the picture.

Felix DuBois (Marc Samuel) seems to think there’s still a question of whose baby Sabrina is carrying. However, for Sabrina, there seems to be no question – all evidence points to Carlos being the baby daddy.

Sabrina telling Michael the truth of her baby’s paternity when Carlos was “dead” was one thing but Carlos being alive changes it all. As far as Sabrina knows, Carlos is still a wanted man for the shooting of Sonny Corinthos (Maurice Benard).

But then he got the call to come help save Kiki Jerome (Hayley Erin) from Morgan Corinthos (Bryan Craig) and that interruption changed everything. That gave Carlos time to get to Sabrina and reveal that he’s alive.

Carlos obviously can see that Sabrina is pregnant and can do the math on when they slept together and her likely gestation status. However, Carlos doesn’t know the details of her relationship with Michael and the timing of their carnal activities.

Sabrina can lie and tell Carlos the baby is not his and is Michael’s, but that puts her in a situation of double dishonesty. She’ll have to lie to both Michael and Carlos. And with Carlos still wanted, no doubt she’ll lie to Michael about Carlos being there at all.

As far as anyone knows, Carlos is the body that bobbed up in the harbor and was cremated but now he’s lurking around Port Charles complicating Sabrina’s life and obviously up to something else, but what? And how will it affect Sabrina?

You’ll recall that Carlos was part of a baby lie with Sabrina in the past – remember he fibbed to Patrick Drake (Jason Thompson) and said Gabriel was his son. As a result, Carlos may not accept Sabrina’s story at face value and may want proof.

And if Michael finds out Carlos is alive, all hell is going to break loose – particularly because you know that Carlos will tell Michael that he slept with Sabrina before he left town (aka “died”). In short, Sabrina has a tough road ahead.

She has to decide which is the lesser of two evils: lie to both the men she loves to protect her unborn child or put her child at risk with the truth. After losing Gabriel, Sabrina will likely make her child the top priority – no matter the cost.