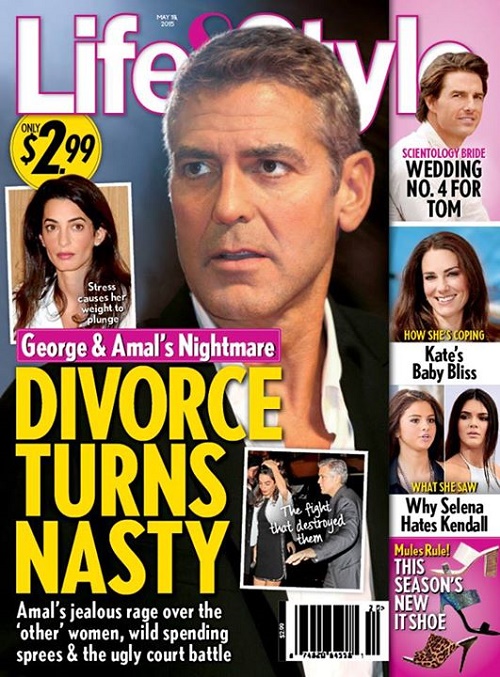 George Clooney has been cheating on his wife, Amal Alamuddin, and the couple is already getting a divorce – seven months after their 2014 wedding in Italy. It’s no secret that George Clooney and his wife Amal have been having issues basically since they said “I Do” and have been fighting over everything from babies, to their careers, to what country they should call home, and of course George’s partying and reluctance to settle down and act like a married man.

This week’s cover of Life & Style Magazine reveals that Amal and George’s divorce is getting very messy very quickly. The headline screams, “George And Amal’s Nightmare Divorce Turns Nasty.” L&S goes on to say that Amal went into a “jealous rage over the other women and wild spending sprees” and promises that there will be an ugly court battle.

Is anyone really surprised that there were “other women” or that there will be an “ugly court battle?” Of course there was cheating – that’s why George Clooney never got married until now. There is a reason why he is referred to as “America’s Most Eligible Bachelor.” The fact that Amal Alamuddin thought she could tame Clooney and force him to be in a monogamous relationship is laughable. And, of course there is going to be an ugly court battle. George should have thought twice before he married a high-profile, well-educated lawyer – it will be a miracle if she doesn’t take him for every penny that he is worth.

George Clooney and Amal Alamuddin rushed to the altar – and we all knew it was only a matter of time before their marriage came crashing down. If George didn’t wind up cheating on his new wife, then she was going to drive him away with her controlling behavior and incessant nagging. Or perhaps it was vice versa and George ran out and cheated on Amal because he was tired of her trying to change him and control every aspect of his life. Regardless of the order of events, the bottom is…we all saw this divorce coming a mile away.