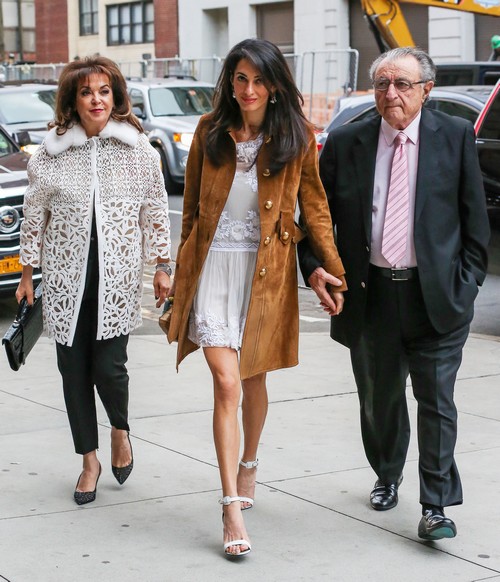 We know that Kanye West also selects all of Kim Kardashian’s outfits, and George Clooney doing the same thing comes off… well, either weirdly D-list or creepily controlling, no? Maybe it’s just because we’re so used to hearing about Kanye West being incredibly controlling and anal-retentive about everything that Kim Kardashian does, and now we’re hearing that George freaking Clooney does the same?

US Weekly’s source explains, “George is very involved in selecting her looks. He’ll watch her try on clothes and will say, ‘I like that. You should get it,’ or ‘No, not that.’ He installed a runway, floor-to-ceiling mirrors, and a crazy light system in their closet. Amal can see every single angle and tell if her outfit is see-through!”

If this report didn’t come from US Weekly, I would swear that it was made up. But it’s coming from US Weekly, which is one of George’s favorite outlets to leak information and is almost always consistent with the Clooney-Alamuddin stories. So this means that George really is that involved in selecting Amal’s outfits, and even though some people are calling it romantic, I still stand by the creepy statement. How is picking out all your wife’s clothes romantic? Sure, for special events and for special occasions, it makes sense. Otherwise? Divorce incoming, divorce incoming.

Do you guys think we’re overreacting, or do you find it creepy too? Apparently, Amal loves it, but then again, she would, right? She married an A-list movie star, and she’s getting all the perks of her new position – until she gets tired of it….

What do you think? Let us know your thoughts in the comments below.