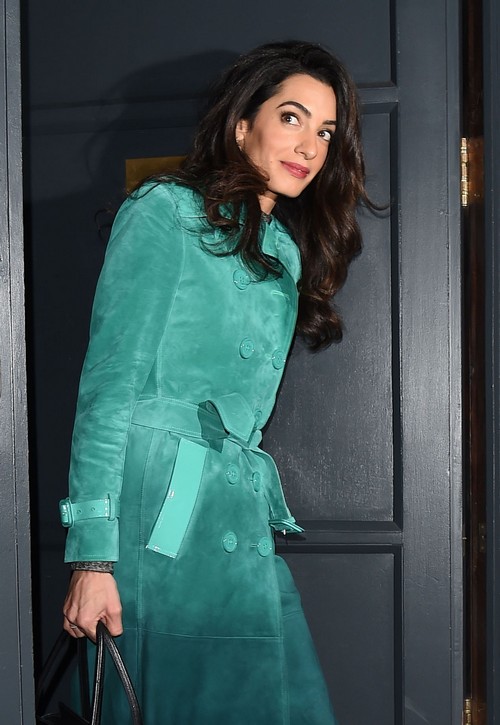 George Clooney and his wife Amal Alamuddin want a baby and haven’t made a formal pregnancy announcement, but multiple reports revealed that the couple started trying to conceive over the summer – and were even looking in to IVF treatments. George Clooney and his new wife defied all odds and made it through their first bumpy year of marriage without getting a divorce, and now they are ready to add a baby to their family.

George and Amal haven’t actually stated that she is pregnant – but actions speak louder than words! The couple has reportedly began construction on their Berkshire, England Mansion and according to a new report they are building a $2 Million baby wing. Seriously, are Prince George and Princess Charlotte living that good? This week’s edition of In Touch Magazine confirms that the construction is underway – and everyone is buzzing that there will be a Clooney baby sooner rather than later.

An inside source dished to In Touch Magazine, “It will include a nursery, spa, mini swimming pool, children’s library, two playrooms, and nanny quarters. They have already hired Los Angeles nursery designer Naomi Alon, and Amal is putting orders in at designer aby boutique Petit Tresor. Amal wants it to be a dream sanctuary!”

Obviously any child of George Clooney’s will be Hollywood royalty – but we can all agree that Amal Alamuddin is going a bit overboard. On the bright side, her staff of nannies that will most likely be raising the child the majority of time will be living a life of luxury in the “baby wing.”

Doesn’t anyone think it is a bit strange that George and Amal don’t want the baby to sleep anywhere near them, and they are putting the infant in its own half of the house? Do you think Amal Alamuddin is already pregnant, or are she and George Clooney getting a bit ahead of themselves? Let us know what you think in the comments below!