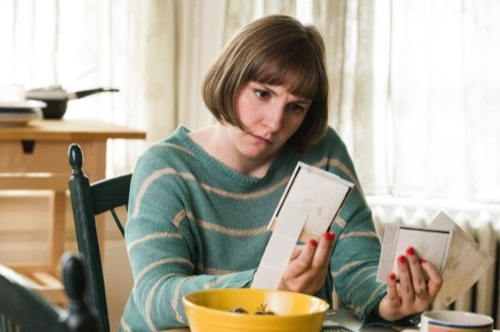 Tonight on HBO their Emmy award winning reality show, Girls returns for an all new Sunday January 18, season 4 episode 2 called “Triggering” and we have your weekly recap below. On tonight’s episode, Hannah [Lena Dunham] moves into a new place and is thrilled with the amount of space she can afford, but struggles with life as a grad student when her fellow workshop writers don’t give her the feedback she expected.

On the last episode, after a congratulatory dinner with her parents (Becky Ann Baker, Peter Scolari), Hannah (Lena Dunham) and Adam (Adam Driver) packed up the last of her boxes and discussed “the plan” for their soon-to-be long-distance relationship. Marnie (Allison Williams) and Desi (Ebon Moss-Bachrach) performed as part of a jazz brunch for a distracted crowd at a downtown restaurant. Shoshanna (Zosia Mamet) signed for her diploma with her parents (Ana Gasteyer, Anthony Edwards), who made a bigger deal out of the event than she thought necessary. Jessa (Jemima Kirke) was confronted by Beedie’s (Louise Lasser) daughter, Rickie (Natasha Lyonne), and later seems nonplussed by Hannah’s impending departure. Did you watch the last episode? If you missed it, we have a full and detailed recap right here for you.

On tonight’s episode as per the HBO synopsis, “in her first days as a grad student, Hannah discovers she can get more for her money, rent-wise, in Iowa. Later, during a video chat, she slyly prods Marnie for intel about Adam. At her first seminar, Hannah warns her fellow workshop writers that her piece might trigger some intense emotions – but doesn’t get the feedback she had hoped for.”

Hannah has left NYC to explore the fast pace life of Grad School but as it turns out there was a reason all the kids hated school the first go around and maybe a certain graduate should have remembered that before she committed herself into moving. On tonight episode of “Girls”, Hannah had at least tried, in vain by the way, to get excited about Iowa. She ended up liking all the space her crappy budget was able to afford her and she also loved what she thought was the relative safety of living away from the big city.

But then she started to miss home and what that really meant is that she missed the people she had left behind. So that made her reach out to Marnie over skype. However that too was bust thanks to poor connectivity in the area. Apparently, where she lives, sometimes she’ll get service and other times she won’t. Her neighbor told her it was pretty much a guessing game.

And as for the class Hannah had signed onto – that was probably another mistake on her part. For it seems she wasn’t being realistic about it. While she was looking forward to both learning and being praised, Hannah actually never thought she would face criticism.

Nor did she expect the rest of the grad students would easily see her in her character “Anna”.

So, yeah, Hannah was being unrealistic. Though she didn’t let go of the matter and later came to embarrass herself when she asked one of the other students if she was just playing the drama back in class. No, the other girl said. She was telling the truth when she told Hannah she didn’t believe she understood the effects of abuse and so was everyone else with their critiques. In fact the only one who didn’t have a problem with Hannah’s writing was Hannah. And unfortunately that’s good enough for the seminar.

Hence, Hannah was already in a bad place when school broke her and someone stole her bike.

But, luckily, was on the way. And he had also invited himself into Hannah’s house without her knowledge.

Elijah had had enough of NYC. It seems a homeless woman pleasuring herself on his steps was the last straw. So he came out to Iowa to have some fun with Hannah. And although she was hesitant – Hannah eventually agreed to living it up.

She needed the break and Elijah wanted to hook up with an entirely different crowd (he already slept with half of New York). So the two of them crashed a party and had a wild night. They were dancing, drinking, having a girl fight in what appeared to be either yogurt or paint, and handing out random hand jobs.

It probably wasn’t their finest hour but it did make them both feel better about where they are in their lives.