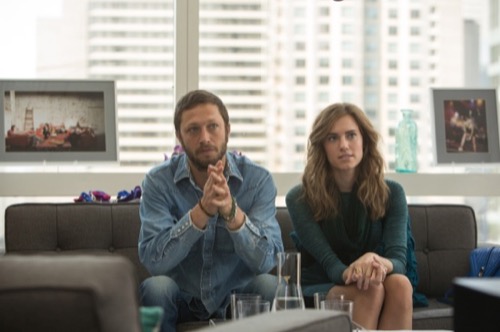 Tonight on HBO their Emmy award winning reality show, Girls premieres for an all new Sunday January 25, season 4 episode 3 called “Female Author” and we have your weekly recap below. On tonight’s episode, Hannah [Lena Dunham] has a lot of free time but nothing to do with only one class a week, while Elijah makes his mark on the Iowa social scene. Back in New York City, Ray [Alex Karpovsky] warns Marnie about Desi’s intentions before they meet with a record label; Shoshanna [Zosia Mamet]  has a job interview; and Adam [Adam Driver] gets mixed up in Jessa’s world after an AA meeting.

On the last episode, in her first days as a grad student, Hannah discovered she could get more for her money, rent-wise, in Iowa. Later, during a video chat, she slyly prodded Marnie for intel about Adam. At her first seminar, Hannah warns her fellow workshop writers that her piece triggered some intense emotions – but didn’t get the feedback she had hoped for. Did you watch the last episode? If you missed it, we have a full and detailed recap right here for you.

On tonight’s episode as per the HBO synopsis, “with only one class a week, Hannah finds herself doing a lot of nothing in her free time, while a visiting Elijah (Andrew Rannells) has become the social butterfly of Iowa. Ray (Alex Karpovsky) gives Marnie a wake-up call about Desi’s true intentions before their meeting with a record label. Shoshanna aces, then blows, a job interview. Adam unwittingly gets drawn into Jessa’s chaotic web after an AA meeting. At a poets’ party in Iowa, Hannah rants about the undue expectations put on women writers, and takes things too far in critiquing her classmates.”

Hannah video chats with Jessa and asks about Adam. She says they haven’t seen eachother much and he hasn’t talked about her.

Marnie tries telling her that she is not just a mistress, saying his girlfriend has an autoimmune disease that gives her fevers and rashes and if he tells her anything upsetting it will risk her health. Ray tells her that this guy just wants to have his cake and eat it too and she is definitely just a mistress. Ray says she thinks she shouldn’t be with this guy because he’s an asshole and a coward. He says the guy’s biggest flaw is that he hasn’t chosen Marnie and they make out.

Shoshanna goes to an Ann Taylor Loft interview and confesses to the interviewer that this is just a practice interview for a job she really cares about.

Desi and Marnie meet with a record company, who assumes they are a couple and asks how long they have been together. Marnie awkwardly asks for a cigarette out of nowhere.

Jessa and Adam talk about Hannah. He says that when she calls she only talks about dumb things, nothing deep, and asks if it’s okay if he throws out Hannah’s refrigerator magnets.

Jessa asks Adam about the woman he is seeing, and he says it’s not like he sees her everyday.

Jessa decides to pee on the street, and gets accosted by police. When she refuses to take a ticket and walks away, she gets cuffed. Adam starts flipping out because the cops are being aggressive, so he gets arrested too.

Elijah and Hannah are at a house party when the classmates who had criticized her story walk in. She asks him why she doesn’t want to write even though she’s finally in her dream program to do the thing she loves. Later, she and her classmates sit around talking about books.

When they keep stereotyping her and saying she’s overreacting about sexism, she goes around the circle and criticizes everyone else’s writing. She says she doesn’t want to be the only one to be honest in her writing, she wants all of them to be honest together. No one says anything.

Ray bails Adam and Jessa out of jail. Adam tells Jessa to grow up and that she’s a bad influence. He says she has been getting Hannah into bad situations and being manipulative. He says he cut her slack because of her addiction, but now that she’s sober and still being the same way, he wants to know what she’s trying to provoke. As he walks away, Jessa calls out to him, saying she really needs him to be a friend.