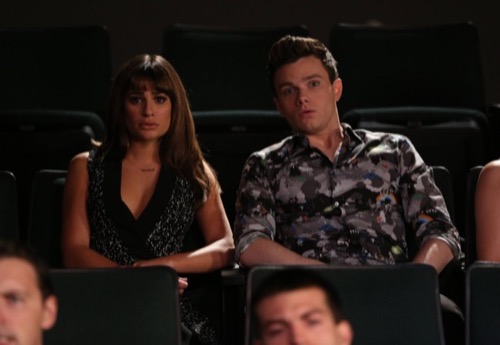 Glee returns to FOX tonight for an exciting all new Friday, January 23 season 6 episode 4 called “The Hurt Locker, Part One,” and we have your weekly recap below. On tonight’s episode, part 1 of 2, Rachel [Lea Michele] proposes a deal with Will that will improve her squad’s chances at the invitational, while Sue [Jane Lynch] continues to meddle by hypnotizing Sam and coercing him into coming on to Rachel in hopes of throwing her off her game.

On the last episode, Rachel and Kurt struggled as they tried to rebuild and co-direct the glee club at McKinley. Meanwhile, Sue was concerned when Becky brings her new boyfriend to town. Did you watch last episode? If you missed it we have you covered, we have a full and detailed recap right here for you.

On tonight’s episode as per say the FOX synopsis, “Rachel tries to make a deal with Will, so that his glee club purposefully underperforms at their invitational. Meanwhile, Sue is busy meddling and hypnotizes Sam into making a move on Rachel to throw her off.”

Coach Sue Sylvester as it turns out is a lot crazier than a lot of people think. Though she can hold a vendetta like no one else – for example her undeniable rage towards the glee club – she also has moments of occasional kindness. And that’s why she’s offered her help to Kurt. For you see she’s been secretly “shipping” him with Blaine this whole time. And now she wants them get back together.

So she told Kurt she’s going to help him get Blaine back. However her idea of helping ended up involving a live bear cub. She dropped one off at Blaine and Dave’s place and basically sent him into hysterics when he thought he was going to be eaten alive.

It seems when she found out Dave has a thing for bears – she got her wires crossed about what that actually meant.

Plus, Kurt has been trying to move on from Blaine. He’s even started to talking to a guy online. Hence he didn’t really need Sue’s help in getting Blaine back. And yet when he told her that – she took it really hard. For a moment there, she thought she could be a flower girl or at least bridesmaid at their “big gay wedding”.

Though, if she’s not focusing all her attention on reuniting Kurt with Blaine, then her takedown of Rachel tends to come back on the agenda. And this time she’s using poor dimwitted Sam to do it. It looks like she hypnotized him into having feelings for Rachel and Sue is going to use that relationship to get Rachel’s mind off on winning Invitationals.

Rachel has already convinced Will to sink his own team so now all she had to do was make sure her own team comes up to par in order to defeat just the Warblers. And, in spite of what Sue wanted, Sam helped clear her head. He’s not that bright but he is a good friend to have around it seems.

As for Blaine and Dave, Sue did get to throw a major spanner into their relationship. Because after she stole their DNA, she found out they were third cousins. And once people know they’re cousins, no matter how distant, that inevitable ruins the mood!

Blaine was so depressed he even spoke to Kurt about Sue’s recent findings. And Kurt reassured him that in no way could he be related to Dave. Sue simply must have made that up and when Blaine wondered why she would do that – Kurt admitted to Sue’s secret plan that’s not so secret anymore.

When Kurt said he was moving on, he meant it. So it hadn’t mattered that he had someone trying to get Blaine back for him. He no longer wanted Blaine as anything other than a friend. And so he told Blaine about the guy he met online.

Apparently, they were about to meet for the first time face to face and Kurt was excited about it. Though, his “date” didn’t go as planned. When Kurt met his dream guy, he found a man old enough to be his father. And that was a bit off putting.

Kurt managed to turn the date around but later he couldn’t fix a Sue fiasco. Sue continued to hypnotize Sam into doing her bidding and thus she used him to gaslight Rachel. First she made Sam grab Rachel’s interest then she made Sam act cold towards Rachel. Then, lastly, she had Sam set Rachel up.

Sam was caught trying to steal Will’s mail and Sam then claimed it was Rachel’s idea that he did so. Sue set this all in motion, by the way, after she had reported to Will’s new principle that he had been willing to consider sabotaging his own glee club. So, when Will had found out what she did, he was going to let Rachel’s glee club triumph at Invitationals but after the mail situation – he decided to bring his A game.

Vocal Adrenaline were on fire and by the end of their specular performance – both the Warblers and New Direction members were in tears!

Sue wanted to defeat the glee club and drive a wrench between Will and his former students and she just that with her parlor magic tricks on Sam.