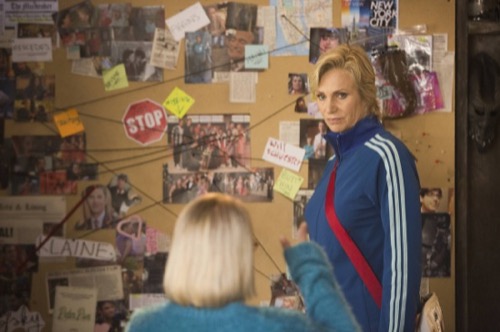 Glee returns to FOX tonight for an exciting all new Friday, January 30 season 6 episode 5 called “The Hurt Locker, Part Two,” and we have your weekly recap below. On tonight’s episode, conclusion. Sue attempts to mend a relationship that she mistakenly thinks needs it, while Kitty tries to help Rachel [Lea Michele] find the perfect set list for the invitational and Sam [Chord Overstreet] recruits a football player for the glee club.

On the last episode, Rachel tried to make a deal with Will, so that his glee club purposefully under performed at their invitational. Meanwhile, Sue was busy meddling and hypnotizes Sam into making a move on Rachel to throw her off. Did you watch last episode? If you missed it we have you covered we have a full and detailed recap right here for you.

On tonight’s episode as per say the FOX synopsis, “trying to mend relationships that she thinks need mending. Meanwhile, Kitty helps Rachel find the perfect set list to win the invitational and Sam recruits football player Spencer to join the glee club.”

Invitationals was only supposed to be a one day thing but after Coach Sue got her hands on it – the already fierce competition was somehow stretched into a three day event. It seems that Sue wanted to mess with everyone’s heads so she suddenly changed the rules (which as principle she’s allowed to do) and now the Warblers and New Direction have a few more days to prepare their set list. Another thing Sue recently created rules for.

And with more time on their hands, Rachel and Kurt are going to use the two extra days they have to hopefully find more members. That’s kind of important because without the full twelve their show choir will immediately have to forfeit at the Invitationals!

So Kurt told Rachel that maybe they should look at former members from last year to help fill their numbers. However, Kitty no longer wanted to be part of New Directions. You see last year was something else for her. She had her friends and she had Mr. Shue. But without them – Sue kind of forced the rest of them to transfer out – she doesn’t think she can work with someone like Rachel.

While very much talented, Rachel is also known to be selfish and truthfully she never paid much attention to Kitty or any other member from last year. So Kitty doesn’t want to pin all her hopes on her to only be let down again when Rachel ditches them for Broadway.

Hence, Kitty was a bust. And, in the meantime, the other guys didn’t have that much success in finding new members. Kurt and Sam had also promised to look for new talent but Kurt ended up falling into Sue’s plot and Sue just kept on hypnotizing Sam.

Eventually, and thankfully, the hypnotizing did wear off but Sue had nearly ruined Sam and Rachel’s friendship all because she was up to her old shady tricks.

Sue was manipulating Sam in order for him to gaslight Rachel. And her plan had worked so well that Sue had neatly driven a wedge between Will and former students without anyone being the wiser. Yet her plan fell ended up falling apart with a snap of the fingers.

And it literally was the snap of fingers.

The snap woke Sam up from trance and after that he started to work for Rachel instead of against her. And as for Kurt, he was still trapped in a fake elevator with Blaine that Sue had set up. Apparently, she really wasn’t playing around when she said she was a fan.

Sue wants Blaine and Kurt to get back together so bad that she somehow concocted a way they could start falling back in love. Thankfully, Sue is smart enough to know that just can’t happen right away. So first she had them become friends which as it turned wasn’t that hard. Locking them up together honestly gave them a chance to talk.

Plus, a common cause or in their a case a common hatred of Sue their kidnapper helped them bury most of the ill-feelings that came up post-breakup. And that was merely week 5 of what Sue is planning to drag out for months.

And, although, Blaine and Kurt missed their teams performing – Rachel managed to keep the kids from freaking out as well as find some new members. Now New Directions is still going to have to fill in their numbers but having Kitty rejoined the team turned out to be a true blessing.

To fight someone like Sue, you’re going to need someone just as devious. And that’s Kitty. Kitty used some of her own dirty tricks (i.e. bribery and computer hacking) to find out about all the songs that made Sue actually feel something. And once New Directions got their hands on that – they used it to best advantage.

They played at Invitationals and had Sue practically in tears. That’s how good they were and some of the other teams even applauded them. Included Will who was proud to see what Kurt and Rachel did.

But one of Will’s new students hadn’t liked the way Will had applauded the other team. And after they lost to New Directions – Will ended up getting threatened. Clint (played by Max George) told him to remember which side he was on or else!