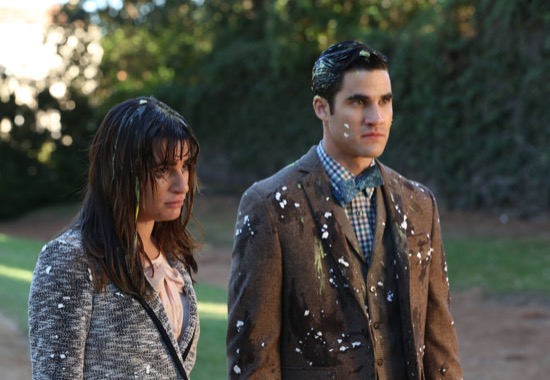 Glee returns to FOX tonight for an exciting all new Friday, February 13 season 6 episode 7 called “Transitioning,” and we have your weekly recap below. On tonight’s episode, Will [Matthew Morrison] takes a stand and teaches a lesson in tolerance to bullies in Vocal Adrenaline. Meanwhile, Rachel [Lea Michele] discovers her childhood home has been sold and New Directions rallies to help her with the transition.

On the last episode, Brittany and Santana had some family convincing to do. Meanwhile, during a Burt Bacharach tribute week, Mercedes returned to Ohio to convince Rachel to pursue her Broadway dreams.Did you watch the last episode? If you missed it, we have a full and detailed recap right here for you.

On tonight’s episode as per say the FOX synopsis, “will takes desperate measures to teach the bullies of Vocal Adrenaline about tolerance. Meanwhile, New Directions rallies to help Rachel transition into her new life when she finds out her childhood home has been sold.”

Will Schuester has everything he could ever want with Vocal Adrenaline. He has the money to get his kids the best costume and as for the kids – they’re recruited from all across the country for their talent. So life should be perfect. And for some reason it’s not!

On tonight’s all new episode of “Glee”, Will’s found out his kids are bullies. Their same kind of bullies his former students used to run from. And speaking of his former kids, it was in fact Rachel and Blaine that were egged by Vocal Adrenaline.

So his kids being the way they are was personal for Will. And that’s why he wanted to teach them a lesson just like he used to with New Directions.

Will was going to do a week of “Tolerance”. He wanted to give his kids musical exercises that would help them see the light in regards of their behavior. However, they didn’t seem to care about being liked. And for that matter they also didn’t care about Will.

They don’t treat with respect and they basically use him to get what they want which a championship. So if it’s not about winning – they ignore him and they lessons he tries to teach.

After Will tried to talk to them, they found the newly returned Coach Beiste’s car and vandalized it. Beiste recently returned from a sabbatical and she turned into he. So Beiste was prepared about some backlash – it just surprised everyone that it had come from Vocal Adrenaline.

When Sam and Spencer (the new singer from the football team) had found out what Vocal Adrenaline did, they wanted to go beat them up. But Beiste stopped them. He said he didn’t want to go down to their level and chose to take something away from the experience.

So Vocal Adrenaline didn’t accomplish anything with their juvenile behavior. They simply lost out because of it. When Will returned to school, he kicked off the trouble making Clint. It was Clint’s idea to attack the other team and he had finally gone too far this time. He got the team involved in vandalism and he tried to get the other kids to revolt against Will’s (weak according to him) teachings.

Yet, even without Clint there, Will told his wife he still didn’t like his job. And that he would quit in a heartbeat if they didn’t have a kid to put first.

And elsewhere, Rachel has found out her parents are selling her childhood home. She had been staying there since she moved back but, despite her parents splitting up; she thought she could stay there a little bit longer.

Apparently, everything else has changed so much she thought home would at least stay the same. So this week New Directions is channeling “Transitions”. They’re going to be throwing a farewell party at Rachel’s house and, out of kindness, they’re going to help her through this ordeal.

And in the meantime, it’s time for the mentors to get to know these new kids. So everyone had to do a duet with whoever they ended up randomly choosing thanks to a game. Though, Kurt didn’t get a newbie when he played – he got Blaine.

Kurt and Blaine have decided to be friends but Blaine is still in a relationship with someone else so he told Kurt how his boyfriend feels about them hanging out. Yet they did hang out and they ended up singing together. Which was fine until they kissed afterwards. And that’s when things went too far.

It was one kiss and Blaine had felt so guilty about it – he told Dave everything. Although Dave wasn’t really upset when he heard the news. He told Blaine he kind of always knew this was going to happen.

There simply is no Blaine without Kurt and vice versa.

However, Kurt is also in a relationship and even though his ended – Blaine couldn’t interfere with Kurt’s happiness.

As for Rachel, she learned how to cope with change with the help of her friends (both old and new). But, sometimes, change isn’t always what it’s cracked up to be. After Clint complained to the principle, he basically whined his way back onto the team. So, rather than stick around for another fight with a bully; Will chose to just quit Vocal Adrenaline and go work as a consultant mentor at McKinley.

So the gang is all back together again!