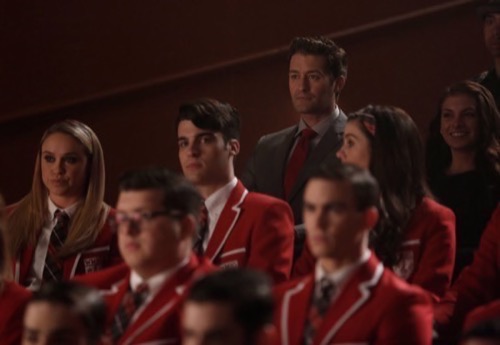 Glee returns to FOX tonight for an exciting all new Friday, March 13 season 6 episode 11 called “We Built This Glee Club” and we have your weekly recap below. On tonight’s episode, at the sectionals, New Directions and the Warblers battle it out, while Rachel faces a decision on whether to return to NYADA or take a role in a Broadway show with former boyfriend, Jesse St. James.

On the last episode, after Dalton Academy burned down, the Warblers were singing a new tune as they considered teaming with New Directions, while Rachel pulled out all stops to convince Carmen Tibideaux to allow her to return to NYADA. Did you watch last episode? If you missed it we have you covered, we have a full and detailed recap, right here for you.

On tonight’s episode as per say the FOX synopsis, “New Directions and the Warblers go head-to-head at sectionals. Meanwhile, Rachel must choose between returning to NYADA and doing another Broadway show with her past love, Jesse St. James (guest star Groff)”

Sectionals are just around the corner and the Warblers are panicking. It seems they saw Vocal Adrenaline practicing one day and they know the other team is better than them. So on tonight’s all new episode of “Glee”, they’ve asked New Directions to hide if not drop their dead weight.

You see the guys in New Directions are the weakest dancers in the newly combined team and what with a big competition coming up – no one wants to depend on them. Hence, after they talked it over, even the girls in New Directions understood where the Warblers were coming from. And Kitty ended up telling the guys the harsh news.

Thus the guys, in particular Spencer and Roderick, suddenly found themselves being hidden in the back while the actual performers stole the show.

And, really, that’s not what they signed up for. When both guys joined New Directions, they thought they it was going to be easy and that they’d get to enjoy the camaraderie but if New Directions doesn’t win at Sectionals then that’s that. New Directions will be finished and then where would they go?

So Spencer and Roderick have begun practicing on the side. They wanted to improve their dancing and unfortunately Spencer ended up hurting himself, severely, in the process.

He still wants to compete though and New Directions is still willing to have him on the team but Spencer’s injury isn’t the only thing they have to worry about. Because, while defeated, Sue Sylvester is never really gone. She’s kind of like cancer in that way. She comes back when her victims least expect it!

Yet, this time, she took it too far by glitter bombing the New Directions’s choir room, poisoning the water supply at the school with eye drops, and then later setting Will’s car on fire.

Will later got her back however. And after everyone stopped vomiting, he shaved her head bald! So Will did get revenge but the sweetest was yet to come.

Jessie James had returned to Lima. Apparently, he’s in the new musical that Rachel got an offer from and it appears he came back to his hometown in order to convince her into taking the job. You see Rachel hadn’t been sure about what she wanted to do with her life. Like did she want to return to Broadway or should she finish school? So having someone like Jessie around definitely liven things up on McKinley.

Jessie was the perfect example of all things she could have if she went back to the stage. She could be performing every night and on top of that she would have the chance to work with Jessie, one of her early great loves. But Rachel’s friends, like Sam and Kurt for instance, reminded her that she had already made that choice before and it didn’t work out.

The last time Rachel had to choose between school and Broadway, she chose Broadway. And then once she got bored with that she then tried to be on TV. Yet nothing she did in the pursuit of a “career” ever made her happy. So Kurt and Sam asked her to seriously consider going back to school.

And once she put aside the great allure of the stage, she realized there was still some things she needed to learn. Like thinking ahead for instance instead of looking for instant gratification. School, in the long run, would do more for her than a job that can probably only last for about a year.

Hence, Rachel is going back to New York. But before she leaves, she wanted to help New Directions bring home the trophies.

And, funnily enough, Sue turned out to be an ally in this. Later, after Sectional had come and gone, Sue admitted to Will that she was grateful about him sticking up for her with Geraldo Rivera. In fact she was so grateful; she changed her mind about New Directions and even helped them win Sectionals by sabotaging her own team.

She had purposely joined their team as coach in order to sink them. And everything she did before, minus blowing up Will’s car that is, she did in order to get New Directions into fighting shape.

So New Directions will be heading to Nationals and Coach Sue is no longer a coach. But at least she went out on a high note!