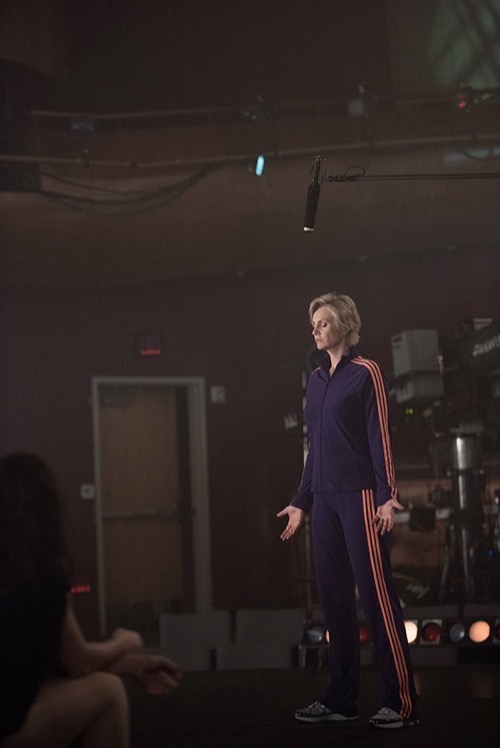 Glee returns to FOX tonight for an exciting all new Friday, March 6 season 6 episode 10 called “The Rise and Fall of Sue Sylvester,” and we have your weekly recap below. On tonight’s episode, after Dalton Academy burns down, the Warblers are singing a new tune as they consider teaming with New Directions.

On the last episode, a pushy, tightly wound tween wanted to book New Directions for his bar mitzvah, while Spencer weighed in on Roderick’s weight and suggests he dropped a few pounds. Did you watch last episode? If you missed it, we have a full and detailed recap right here for you.

On tonight’s episode as per the FOX synopsis, “after Dalton Academy burns down, the Warblers are singing a new tune as they consider teaming with New Directions, while Rachel pulls out all stops to convince Carmen Tibideaux to allow her to return to NYADA.”

Coach Sue is on the warpath on tonight’s all new episode of “Glee” and she’s not going to let her massive crush on the Superintendent or her friendship with Becky stop her. Apparently there was a fire at Dalton’s and unfortunately the entire place went down with it. So, instead of simply giving up, the Warblers approached New Directions. You see they wanted to join together and hopefully win the title at Nationals as one team. But then Sue interfered.

Sue hadn’t liked the idea of the Warblers and New Direction working together. So she stopped them by going above even the Superintendent’s head. With his nephew still on the team, the Superintendent wasn’t going to hinder them whatsoever. And in the end Sue chose to directly approach a congressman rather than try to change her boss’s mind.

Yet, it appears she had gone too far when she had eventually crossed Becky in order to hurt the glee club.

Becky, you see, had her moral limit. An although she was willing to perjure herself and even steal sweat suits from stores for Sue – she just couldn’t wrap her head around the idea of hurting a couple of kid that had lost their school. So she gave Sue an ultimatum. If Sue continued to make things hard on the kids from Dalton then she was going to “rue” the day.

And, well, Sue didn’t take the threat seriously. So later she was a bit blindsided when the Superintendent suddenly called her into the office.

It seems that someone, though he doesn’t know who, showed him Sue’s hurt locker. You know the one that has a creepy shrine to Kurt and Blaine plus several voodoo dolls of students. All of which he could have looked past by the way, but then he found Sue’s Penthouse cover and that was against a very strict morality clause that was in her contract.

So Sue was fired and even though that was bad enough – the worst was still to come. Because, later, Sue tried to win back her good name by sitting down for an interview with Geraldo Rivera. And the snake that is Rivera ended up turning on her as well.

Geraldo Rivera’s interview was actually an expose. And in it, all of Sue’s lies and manipulations were revealed. Including her off the bat form of teaching.

But, still, none of that was as hurtful as listening to her mother admit to never loving her. Upon hearing that, Sue punched out Geraldo and fled from the interview before she could even hear Will defend her. Apparently, Will thought she was a good teacher and so he went to bat for her yet Sue never stuck around to listen.

Thus, she continues in wanting to destroy New Directions. And without her job at McKinley – the only way to do that meant she had to accept a job as Vocal Adrenaline’s new show choir coach.

Surprisingly one of the things that made Sue hate the show-choir to begin was her mother’s love of the theatre. So when Sue made peace with her mom and that her mother lied about being a Nazi hunter – she found out she didn’t really the arts. She just hated New Directions.

So finding a place at Vocal Adrenaline was the best place for her. And if McKinley doesn’t win Nationals then all arts and music programs in their district will automatically be cut.

Sue’s interview, while destroying her career, did at least give people the idea that without such programs money and space could have been allocated to better uses. Like an extra classroom or giving their students updated material. Hence there’s a lot riding on the line for New Directions.And because the Warblers were putting up such a fight about which uniform to wear – the coaches decide to mix their traditional uniform and New Directions’ red shirts all in one.

And yet there still is one problem that the group are going to have get over and that’s Rachel. You see Rachel got job offer on broadway but she also got NYADA to change their minds about her and offer her place at their school again. So is she going to make the same mistake as she did last time?