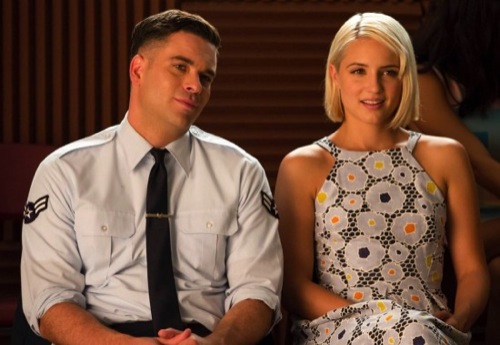 Glee returns to FOX tonight for an exciting all new Friday, January 9 season 6 premiere episode called “Loser Like Me/Homecoming” and we have your weekly recap below. On tonight’s episode, in the season 6 premiere, Rachel  [Lea Michele] returns to Lima after her TV failure and discovers that Sue has banished arts at the high school, which Rachel sets out to rectify. Meanwhile, Puck, Quinn [Dianna Agron], Santana [Naya Rivera], Artie, Mercedes, Brittany and Tina show up at McKinley for Homecoming and decide to pitch in and help Rachel recruit members for the resurrected glee club

On the last episode, Rachel met a famous television writer (guest star Kristen Schaal), whose eccentric personality caught Rachel off guard. Meanwhile, Sam and Mercedes dealt with the pressure of commitment as their careers took off, and the time had finally come for Blaine’s big showcase with June Dolloway (guest star Shirley MacLaine) at NYADA. Did you watch last season’s finale episode? If you missed it we have you covered, we have a full and detailed recap, right here for you.

On tonight’s episode as per say the FOX synopsis, “after Rachel’s humiliating failure as TV actress, she comes home to Lima to figure out what she wants to do next. Upon discovering that Sue has banished the arts at McKinley, Rachel takes it upon herself to reinstate and lead the Glee Club. Meanwhile, Blaine, no longer in a relationship with Kurt, has moved home to coach the Warblers while Will is coaching rival Vocal Adrenaline, and Sam is the assistant coach for the McKinley football team. Then Puck, Quinn, Santana, Mercedes, Brittany, Artie and Tina all return to McKinley for Homecoming and help Rachel and Kurt recruit for the new glee club.”

Rachel had done her best to make a name for herself in television and unfortunately she failed at it. Her TV show was cancelled after a mere one episode and her career has taken a hit because of that. So what does any starlet does when she needs to lie low and let the dust settle – she goes home. Where she hopes she can find the support she needs to get back up again.

But sadly that’s not what Rachel found when she got there. It seems her parents are getting a divorce and they had originally plan to hold off on telling her until her own person life got sorted. Though that hadn’t happen yet.

Immediately after her show, Rachel went underground and basically hid from everyone who loved her. So she ended up missing a lot while living in seclusion. She missed out on the fact her parents were unhappy. And she’s just finding out Blaine had returned home after an ugly breakup with Kurt.

Blaine had realized he couldn’t do New York without Kurt so he came home just like Rachel (embarrassed) and he’s doing better now that he’s coaching the Warblers. So Blaine new positive outlook helped Rachel in the end. It made her feel less like a failure and even gave her an idea about where to go from here.

Coach Sue Sylvester has taken over their school and she appears to have drain the place of all sense of fun. Rachel tried talking to Sam (the new assistant coach at McKinney) about where the school was going but he told her to take it up with Sue. Sue the only one with the power to start up glee club again.

And so Rachel talked to her and what she found was the same closed minded Sue like always. Sue was not going to bring back the arts. She found it a waste of time to begin with and there was no way she was going to waste her budget by throwing it a failure (in her opinion) waiting to happen.

Meanwhile, there was Kurt who also felt himself cut adrift. He tried to date again and realized he was far from over Blaine. So he needs something in his life right now. Preferably, a project to help boost his confidence.

Although, he was the one to call off the engagement, Kurt hasn’t been doing so well without Kurt.

And then there’s Mr. Shuester. He’s coaching Vocal Adrenaline and it appears to be a job he loves. At first glance anyway. Will loves teaching but this batch of kids aren’t anything like his former glee club.

They don’t come to him to talk and outside of practice they tend to keep to themselves. So, yeah, there’s a part of Will that misses McKinney and he wasn’t afraid to admit after Rachel came to see him. Though he like the rest of her friends and family back home felt like Rachel needed a push.

Will, Sam, Blaine, and Rachel’s dad all held an intervention. They watched Rachel failed show “That’s So Rachel” with her and they told her she deserved to give herself a break. So she couldn’t convince Sue to reinstate the glee club – there are other options. And eventually Rachel found them on her own.

Rachel went to the superintendent and asked him reinstate the glee club and after she swore to donate the money that was needed – he gave her his permission to start back up the glee club. But there was one condition. If Rachel wanted the glee club then she was the one that was going to have to coach it.

Yet, Rachel didn’t want to do go about coaching along. And luckily she didn’t have to because Kurt had returned home for his work study. Well, he said work study but really he came back for Blaine. Kurt wants a second chance with the love of his life.

And, sadly, he had already agreed to work with Rachel when he found out Blaine had started seeing someone else. Not just anyone. Blaine has been dating Karofsky as in the same guy that used to bully Kurt about being gay until he realized he was gay as well.

So Kurt is heartbroken. He had a chance with Blaine and obviously he missed it.

When Kurt and Blaine broke up, Blaine came home and realized he needed the good old traditions he had left behind. Yet, change is just around the corner and he has no idea how to deal with it.

A girl had sued Dalton in order to be able to go to school there and now she wants to be part of the Warblers. Blaine hadn’t the like the idea but after a chat with Will, Rachel, Sam, and Kurt – he realized he should at least give her the benefit of auditioning.

Though, Kurt and Rachel are god at giving advice – they suck at taking it. Kurt wants to be co-director and so far Rachel has been holding off on naming one. So right now he feels like a glorified assistant. And the two of them have been stuck fighting over the set list.

Hence, they needed a third or possibly more to come in and help them with the glee club

Rachel ended up calling in some old friends from the original glee club and so Santana, Mercedes, Artie, Tina, Brittany, Quinn, and Puck all came back. Rachel knows they can’t stay for long but she asks them to come and visit every once in a while just to mentor some of the kids. That is if they get kids!

Rachel can be sort of scary as she sets about recruiting. And Kurt is just as pushy as her. He tried to recruit the gay footballer and was told “no thank you”. Kurt thought he was turned down because the kid didn’t want to be part of the gay stereotype but the truth is the kid simply didn’t want to join.

And as for Blaine’s dilemma, Rachel as it turns out can come in handy. It’s just depends on the task. Blaine had asked her to mentor Jane (the girl that wants to join the Warblers) and Rachel life on Broadway inspired the young girl. So Rachel definably helped Jane give the performance of her life.

However that wasn’t enough to sway the Warblers. They’ve been a brotherhood for centuries and it seems they wanted to stay that way.

Back at the gang’s old stomping ground, the returning New Direction members were in for a rude for awakening. Their school had been taken over by junior members of the Tea Party and they were up against some pretty firm and somewhat anti-liberal minds. So recruiting was going to be hard and it didn’t help that one former member from last year was still at the school bad mouthing the club.

Kitty hasn’t forgiven Artie for the way he treated her and she’s still mad at the way the former members had abandoned the club when they most needed them. So Rachel and Kurt are fighting an uphill battle. Glee club is worse off now than when they started.

And it doesn’t help that Sue is still her same old crazy self. She continues to hate the glee club and has no qualms about interfering with their success. She tried to approach new kid Spencer about joining the club just so he can suck. And, surprisingly, he turned her down. It looks like Sue might be losing her touch when it comes to threatening and

But the glee club did get one member to sign on. And they found him hiding out in the library. Roger had recently transferred to the school after he had moved to Lima from Chicago. He hasn’t been able to make friends and frankly he fits the bill for New Directions.

Roger auditioned and he was really good. So good in fact Rachel signed him up right on the spot. And it wasn’t long after he signed on that they got their second member. Jane, from Dalton, decided to transfer schools when she realized the Warblers were never going to be happy with her on the team.

Though, Blaine hadn’t known about the transfer until after it had happened. So once he heard about it, he accused Rachel of poaching and the friendly competition they had all agreed to in the beginning is now over.

Blaine is upset because he had found for Jane but she didn’t want to force herself onto people. So with New Directions she can finally meat people who will accept her as she is.

And by the episode, New Directions ended up having four members after a brother/sister team joined. It’s not much but it is a start!