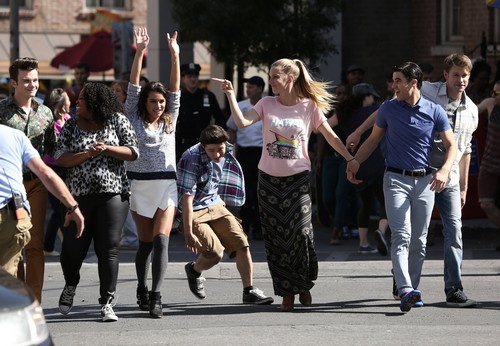 Glee returns to FOX tonight for an exciting new episode. In “The Untitled Rachel Berry Project,” Rachel meets an eccentric TV writer in the Season 5 finale. Meanwhile, Sam and Mercedes move forward in their careers; and Blaine performs with June Dolloway at NYADA.

On last week’s episode in an episode written by series star Chris Colfer, Rachel attempted to salvage her reputation among Broadway gossipers by hiring Santana as her publicist and creating a charity for rescue animals. Meanwhile, Kurt nabbed the lead role in a retirement home production of “Peter Pan.” Did you watch last week’s episode?  If you missed it we have you covered, we have a full and detailed recap, right here for you.

On tonight’s episode Rachel meets a famous television writer (guest star Kristen Schaal), whose eccentric personality catches Rachel off guard. Meanwhile, Sam and Mercedes deal with the pressure of commitment as their careers take off, and the time has finally come for Blaine’s big showcase with June Dolloway (guest star Shirley MacLaine) at NYADA.

Meanwhile Mercedes is kicking off her mall tour by performing at their local mall, and Brittney has returned to town just in time to be Mercedes’ back-up dancer.

Blaine is stressed because he lied to Kurt and told him that he would be performing on the showcase. He tries to persuade June Dolloway to put him in, but she’s not buying it. He finally breaks the news to Kurt, and he doesn’t take it well.

Treasure Trailz is looking for a new spokesperson, and Sam heads to the audition. He’s already to sexually frustrated he has to snap a rubberband on his wrist whenever he sees a girl, and now in order to audition her has to dance with a bunch of half naked models in bathing suits. Afterwards, Charlie the spokesperson of Treasure Trailz informs Sam he has made the cut and invites him to come back later that night.

Afterwards Rachle, Blaine, Britney, and Kurt divide and conquer and sit down with Mercedes and Sam individually and tell them that they should break up before Mercedes leaves on tour. Sam and Mercedes are both adamant that they aren’t going to break up.

While everyone is preparing for the showcase, their tour, their modeling gigs, etc, Mary Holleran is driving them insane and questioning them about Rachel. Kurt isn’t a fan of Mary though. Rachel is sure that Mary is a genius, so they all sit down to read through the pilot episode of the Untitled Mary Holleran Project. Rachel quickly realizes her friends are right and Mary is a wack-job, especially after her script included Kurt wearing a dinosaur costume, Rachel’s gay Dads working for NASA, and Blaine and Britney sleeping together.

Blaine sits down with Kurt and informs him he is going to quit the showcase with June, because he doesn’t want to hurt Kurt. He tells Blaine it is “his turn to fly” and he is “very excited” to watch him perform in the showcase.

Rachel has a heart to heart with Mary, and informs her that the character Rachel is nothing like her. Rachel sings a song to Mary, she doesn’t know how to write a script- but “this is the way she wants the wants the TV show to feel.” Mary informs Rachel “her version will never make it” but she is willing to write the “happy script” that Rachel wants.

Sam heads to his photo-shoot for Treasure Trailz. Charlie kicks all of the men out of the room because they are “killing Sam’s sex vibe.” After some hot and steamy flirting with the photographer, she kisses Sam.

Sam runs home and tells Mercedes that he kissed another girl, Mercedes guilt kicks in and she realizes that she can’t keep Sam tied down like this forever. Especially since she is living for a tour. Sam promises her that no matter where he winds up and what he’s doing, he will always be thinking about her.

It’s time for June and Blaine’s big showcase, and they pull it off without a hitch. Rachel, Mercedes, Sam, and Kurt all cheer him on from the audience. At the end of the showcase Blaine invites Kurt up on stage to sing a duet with him, despite the dirty looks June shoots him By the end of Kurt and Blaine’s rendition of “American Boy” they win June over and she joins them on the dance floor.

Rachel and all over her friends sit down with the new version of her script for The Untitled Rachel Berry Project, they are interrupted by a honking outside. They all rush downstairs to see a huge city bus with Sam’s shirtless picture plastered across the side of the bus. Sam announces that he has achieved his goal and he is heading home.

The friends realize this is good-bye and they are all heading their separate ways. Rachel, Mercedes, Sam, Britney, Blaine, and Kurt all make a promise to meet back up in the exact spot they are standing on in six months. Then they break into song…and a flash mob