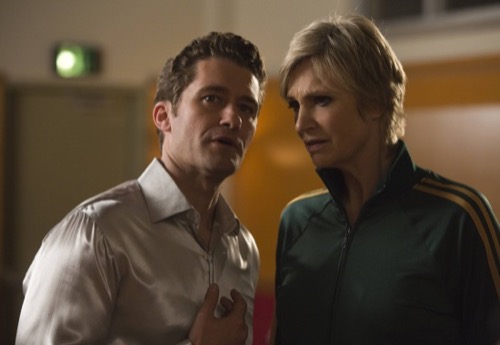 Glee returns to FOX tonight for an exciting all new Friday, February 27 season 6 episode 9 called “Child Star.” and we have your weekly recap below. On tonight’s episode, a pushy, tightly wound tween wants to book New Directions for his bar mitzvah

On the last episode, the members of New Directions were busy at work planning, planning and planning, while Sue encouraged everyone to follow their hearts.

On tonight’s episode as per say the FOX synopsis, “a pushy, tightly wound tween wants to book New Directions for his bar mitzvah, while Spencer weighs in on Roderick’s weight and suggests he drop a few pounds.”

McKinley is gearing up for the President’s Fitness Test and Coach Sue wants her students to be in tip top shape. Which in all fairness is good for their health but on a personal note Roderick, the newest New Directions member, is suffering because of it. To put it bluntly, he’s on the husky side and keeping up with the rest of the guys as they’re running or climbing up a rope is more than just a trial for him. So on tonight’s all new episode, he asked Spencer for his help in passing this test. And Spencer was going to turn him down until he saw that Roderick had befriended the new guy Alistair.

In case you forgot, Spencer is gay and Alistair is just his type. However there is one problem that stands between them and that’s Spencer. Apparently, he’s not the most subtle kind of guy and Alistair is slightly turned off by it.

So Spencer worked out a deal. He was going to help Roderick with his fitness and in return Roderick was going to help him and Mason with their relationship problems. Mason, another new kid, has a bit of a crush on Jane. And it looks like she may like him in that way as well. But his twin sister keeps on getting in the way.

She’s kind of possessive and Mason doesn’t know how to stand up to her. He tried it once and Madison got so upset she mentioned a diarrhea episode from his past while they were middle of the cafeteria.

And in the meantime New Directions (and Sue) have been dragged into helping a kid with his Bar Mitzvah. Myron Muskovitz, you see, is the School’s Superintendent’s nephew and because Sue wants something from the elder – she has to now pander to the younger. Who, unfortunately for everyone, is an out of control spoiled brat.

Myron has abused his stage dancers and has Sue reading him the Torah in his sleep so that the information can sink in without actually having to do any work memorizing. So no one can stand yet no one can refuse him. If Myron says he wants the glee club to perform at his party then that’s what they have to do.

Though, they seem to be having a problem with working together. After the guys’ pact fell through, everyone tried to elect singing along rather than with another member of glee.

Spencer tried the tough love approach with Roderick and that didn’t work. It would honestly be best if it was described as blowing up in his face. Because after Spencer pushed Roderick too far – Roderick then said his friend was never going to date him.

The guys were so angry at each other that not even the great Will Schuster was able to repair the damage with one of his sayings. Speaking of which, when Sue was told she was going to be dancing for Myron’s party – she then took out all her frustrations on him until another one of his sayings finally pushed her into physically attacking him. Luckily no one was hurt but Will did threaten afterwards to trip on her stage.

This party for a thirteen year old had gotten out of hand and no one knew how to stop it. Sue didn’t want to anger the superintendent because he is the superintendent (and her secret love interest) and no one could afford to anger Sue. Hence, in spite of misgivings, the New Directions went ahead with throwing the best party they could have for a kid that had become a nuisance.

Myron was tyrant all the way to and on the day of his Bar Mitzvah. And on the day he had been waiting to celebrate, Myron’s party was derailed because he had gotten into his pod too soon.

Myron wanted debute onstage by coming out of his custom made pod and instead he got trapped mid-air. So Spencer was asked to help and he chose to have over the reins to Roderick instead. The lever that had been holding the pod was stuck yet it was several feet off the ground. Meaning someone had to climb up the rope to disentangle it and because it resembled the rope the guys have to climb for their fitness test – Spencer dared Roderick to do it.

You see they had falling out because Spencer called Roderick a quitter (a slow and fat quitter) and so Spencer knew that if Roderick was able to climb the rope this time – he wouldn’t be too scared about doing the same thing later on. And surprisingly this plan worked. Once Roderick was able to climb up and free Myron, he thanked Spencer for knowing that he could do it. Although, technically, Spencer knew he could do it after he heard that babies have been known to lift trucks in the time of crisis.

So later, as Myron was being helped out of his soiled underwear, the guys all took the stage together to buy the kid some time.

And when Myron was ready, he and the glee club found out they make a pretty good team. So much so that the Superintendent strong-armed Myron’s school into allowing him to skip a few grades behind everyone’s back and enrolled Myron at McKinley.

Now Myron is a new member of the glee club and after Spence talked his new boyfriend Alistair into joining as well – New Directions got closer and closer to having enough people to compete in Sectionals!