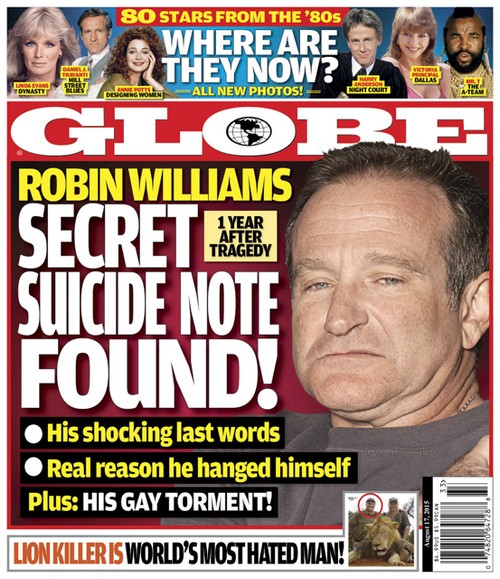 Robin Williams’s suicide death shocked the world, and still remains a sad and controversial subject. After the comedian and beloved actor’s death, there was rumored to be a suicide note found at the home he shared with his wife Susan Schneider where he hanged himself with a black nylon belt. While some outlets reported that the note was nothing more than bizarre scribbling on a piece of paper that read, “I’m done with that,” other sources insisted there was no suicide note and it was all a hoax.

Without a legitimate suicide note, conspiracy theorists began to contemplate whether or not Robin actually took his own life – or if he as the victim of a heinous crime and cover-up. According to this week’s edition of GLOBE Magazine, there WAS a suicide note, and it was discovered a year after Robin killed himself on that fateful and devastating day back in 2014.

The August 17 cover of GLOBE Magazine features a photo of the actor and comedian and headline reads, “Secret Suicide Note Found 1 Year After Tragedy.” The cover goes on to tease, “His shocking last words,” and they have the inside story on why Robin Williams “really hanged himself.” We really can’t fathom there being a “real reason,” anyone would want to kill themselves – but it is no secret that Robin had battled depression and struggled with drug and alcohol addiction in the past, so that most likely played a part in the motives behind his suicide.

GLOBE also features information on the sadistic brute who murdered Cecil the lion. The wretch is now the words most hated man!

For our added pleasure GLOBE features an information section on 80 stars from the 80’s including details of where they are now – plenty of informative reading on these pages to enjoy this week.

Then, there is also the possibility that it may have something to do with his wife Robin Schneider, rumor has it that his third wife had isolated him from his family, taken over control of his life and finances, and stood between him and the help he desperately needed. What do you think Robin Williams’s suicide note will reveal? Share your thoughts and theories in the comments below and don’t forget to pick up this week’s edition of GLOBE Magazine as soon as it hits newsstands!