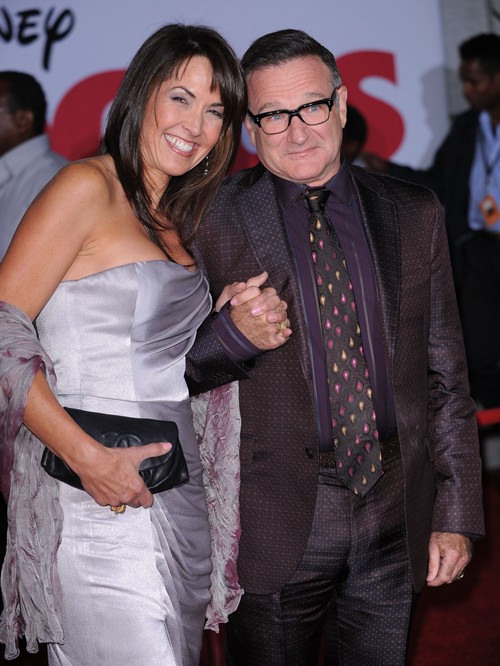 Robin Williams’ suicide seemingly came from nowhere, but the star’s secrets are slowly revealing a troubling picture. Since Robin took his life, his family continues to fight for his estate and the inheritance he left them while trying to prevent Susan Schneider from cashing on Williams’ suicide.
One common thread in the troubled life of Robin Williams appears to be his wife, Susan Schneider. During what would be his final years, Susan appeared to be methodically isolating Robin. Susan managed to effectively shut off Williams’ family, including his three children – Zachary, Zelda, and Cody. Robin wasn’t allowed to spend time with them, even being forced to spend his birthday alone according to sources who revealed Robin’s real life behind the jokes and smiles.

In the initial stages of Robin and Susan’s relationship, Schneider portrayed herself as interested in Williams and his well-being. Susan would visit the comedian on set and cared about the projects he would take on. However, the second Schneider and Williams married, she changed, only wanting to spend time with him when press was present.

Robin’s friends and family noticed the changes and were quickly removed from Robin’s life when concerns were shared. Susan had isolated Robin to the point she refused to share a bedroom with her husband, citing that Robin “talked in his sleep” keeping her awake. Williams, feeling like he had no control, took his own life after Susan took off for a solo vacation after finding out Robin was diagnosed with Parkinson’s Disease. Who leaves a depressed man who is battling the early stages of severe disorder alone to go on a solo vacation?

Now, nearly a year after his suicide in August, Williams’ family is still battling Susan Schneider in court over the inheritance and estate. A court had initially given Williams kids and Susan time to divide the personal effects, belongings, and money. With the aid of a mediator, most of the estate has been split. But, Susan wants her share of the money and property Williams left behind.

Robin left the bulk of his estate to Zachary, Zelda, and Cody. Susan inherited their San Francisco Bay home and Williams stipulated Schneider should receive “enough funds” to keep the home and maintain the property. Note that this is the same house where Williams committed suicide. Schneider asked for the lion’s share of the items in the Tiburon home including watches, jewelry, photos, and his awards, which the Williams offspring believe belong to them.

The two sides are divided, and it’s beginning to become a war. Susan’s attorney pleaded with the judge, “I’m representing an emotionally grieving widow who’s trying to honor her husband’s wishes.” Robin’s three children countered that Schneider is “adding insult to a terrible injury” by trying to change the agreement, manipulate the court, and use delay tactics to get what she wants. Basically, Susan Schneider is trying to cash in on Robin Williams’ suicide.

Nearly 300 items are still being disputed in the case between Susan Schneider and Robin Williams’ children. The exact amount Susan will receive to maintain the home Robin left is another factor the sides cannot come to an agreement on. A judge gave both sides until the end of July to resolve the split.