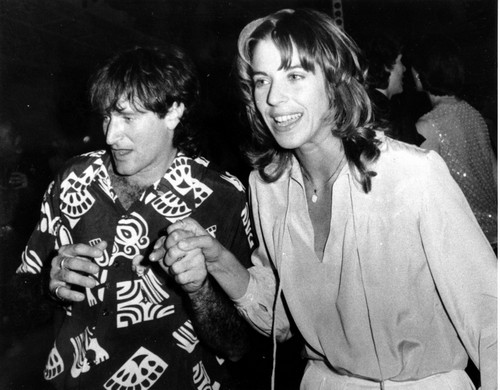 While friends and family of the late Robin Williams have demonstrated an enormous outpouring of love for the actor, and pain over his death in a private and public manner, there is one very significant person who has kept mum. Robin Williams’ first wife, Valerie Velardi, has yet to make a statement about her former husband’s death.

The two divorced in 1988 and have one child together, Zachary “Zak” Pym Williams. The two met before Williams’ highly successful career began and remained married for ten years. The marriage was a rocky one, however, with Valerie having endured the embarrassment of an affair her husband had with cocktail waitress Michelle Tish Carter that resulted in the mistress suing Williams in 1986 for giving her herpes. She would later find out her husband had another extramarital affair with their sons’ nanny, who later became his second wife, Marsha Garces. At the time of Velardi and Williams’ divorce, Garces was already several months pregnant with Williams’ second child, Zelda Williams. He and Garces divorced after 19 years of marriage.

Williams ended up ‘losing’ about 20 million between the two divorces and has been quite vocal about how difficult it has been on him financially.  While Williams seemed to have a good relationship with second wife Marsha after their divorce, Williams didn’t seem to have the same with Velardi. Despite the fact that she is the mother of his first child, Velardi is likely still too bitter about her former husband’s affairs and the ugly divorce that followed. Still, with fans who never even met the star sharing their grief through social media, it is hard to believe that Velardi, Williams’ first wife and the mother of his first child would refrain from providing some type of statement about his death.

We will keep you posted, CDLers and let you know if Valerie has a change of heart.