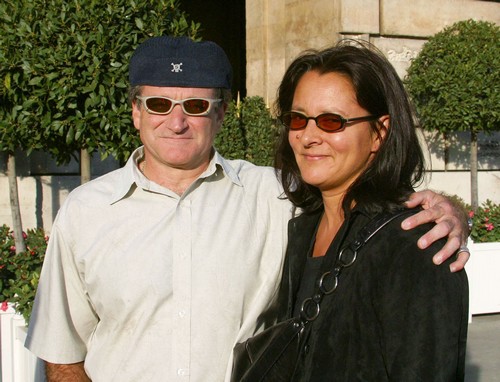 The world is still recovering from the unexpected death of actor Robin Williams. Moments after the story broke that Williams had committed suicide, his wife Sharon Schneider issued a press release confirming the star’s death and asking for privacy during this no doubt upsetting time. No one is denying the fact that Schneider is devastated by Robin’s death, but there is no way she is as devastated as Marsha Garces, his second wife and partner of twenty years. Ironically, Schneider issued a press release confirming Robin’s death just hours afterwards, however Garces has finally  spoken out about the loss of her dear Robin.

Marsha’s statement: “My heart is split wide open and scattered over the planet with all of you. Please remember the gentle, loving, generous – and yes, brilliant and funny – man that was Robin Williams. My arms are wrapped around our children as we attempt to grapple with celebrating the man we love, while dealing with this immeasurable loss.”

Marsha Garces married Robin Williams in April of 1989 after serving as his family’s nanny when he was married to Robin’s first wife, Valerie Velardi , and the couple remained together for twenty years, before divorcing in 2010. Garces wasn’t just married to Robin, she worked side by side with him on several of his high-profile films. Marsha was listed a producer on Hook, Dead Poets Society, Mrs. Doubtfire, and Patch Adams. When Marsha and Robin weren’t working together on his movies, they were raising the children they shared, Zelda Rae Williams and Cody Allan Williams, and donating their time and money generously to charity.

If there is anyone who truly knows Robin Williams and what could have been going through his head leading up until the days before he took his own life, it would be his partner of twenty years Marsha Garces. Considering Robin’s downward spiral after his and Marsha’s divorce in 2008, there is a good chance that Marsha knew what was coming and his issues may have played a part in their separation. While we sympathize with Valerie Velardi and Sharon Schneider, if anyone is going to be able to help us make some sense out of Robin William’s shocking death, it is going to be his previous wife, Marsha Garces.