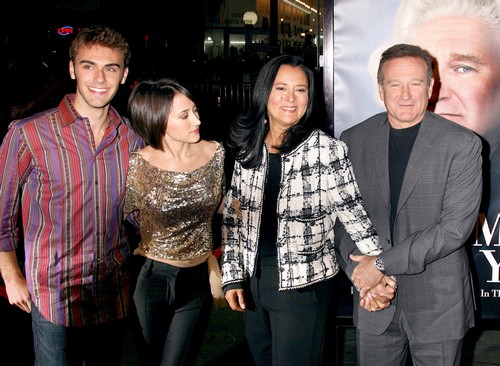 Marsha Garces is Robin Williams’ second wife – known as Marsha Garces Williams, she was loyal and loved the late actor dearly. When the shocking news of Robin Williams’ death broke yesterday it was served to us with an almost immediate statement from his current wife, Susan Schneider, kind of stating the obvious. Susan has lost her best friend and hopes that everyone remembers Robin’s genius while giving the family their privacy. While media handlers like to get something out to the public it felt a little cold and too prepared but likely accomplished the task of getting fans and the media alike to leave Susan be.

Marsha Garces is the woman that is tangled in a storm of real emotions right now. She was Robin’s wife for twenty years before they divorced in 2010. While their relationship began while he was still married to first wife, Valerie Velardi and Marsha was actually pregnant when they married in 1989, it was Robin’s marriage to Marsha that appeared to be the real deal. She stayed with him through his tumble back into addiction and in an article in 2009 Robin claimed that she had forgiven him for everything but that their relationship was never the same after he messed up.

That statement can be read a few ways but the bottom line is that Robin and Marsha spent a good chunk of their lives together as parents, partners in business and doing good together through their charity work with The Windfall Foundation. When asked about Marsha in interviews Robin’s tone would always soften and that never changed even when their divorce cost him a mountain of money.

Marsha had her worst fear come to life yesterday when she learned of Robin’s alleged suicide. This was exactly the scenario that she most feared when dealing with his mood swings and watched those genius highs morph into debilitating lows literally overnight. No one saw the writing on the wall and the tragedy in the making quite like Marsha did and just because she opted to split from Robin doesn’t make the emotional wallop any easier right now. Her silence is the most powerful statement right now don’t you think? Tell us in the comments below!

Here is Marsha Garces statement after Robin William’s suicide death: “My heart is split wide open and scattered over the planet with all of you. Please remember the gentle, loving, generous – and yes, brilliant and funny – man that was Robin Williams. My arms are wrapped around our children as we attempt to grapple with celebrating the man we love, while dealing with this immeasurable loss.”