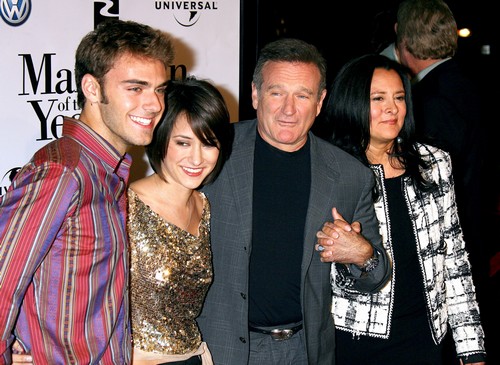 Robin Williams’ oldest on Zachary Pym Williams from his first marriage to Valerie Velardi, has finally broken his silence and has found the strength to release a statement following his father’s tragic suicide death. E News reports that Zachary has released the following emotional statement, “Yesterday, I lost my father and a best friend and the world got a little grayer. I will carry his heart with me every day. I would ask those that loved him to remember him by being as gentle, kind, and generous as he would be. Seek to bring joy to the world as he sought.”

Zachary was very close to his father and though he was aware of his father’s bouts of depression, he was utterly shocked by his decision to end his life by committing suicide. Zachary “Zak” was born on April 11, 1983. His parents divorced after Robin was found to be having an affair with Zak’s nanny, Marsha Garces, who ended up becoming Williams’ second wife.

Williams always shared his strong love for his children and he and Zak had a great relationship. Williams’ children often accompanied their father to movie premieres, though his daughter Zelda Williams, now 25, was more in the public eye than her half-brother Zak and brother Cody Williams.  Zelda and Cody are Robin’s children from second wife Marsha. Zak had once expressed an interest in acting to his father, which he pursued only for a short time. He later decided to pursue a business degree, already holding a degree in linguistics, rather than continue his short-lived acting career. Zak is healing now, being comforted by mom Valerie Velardi.