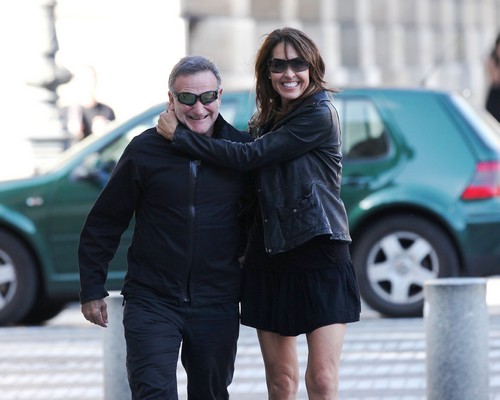 While Susan Schneider, widow of Robin Williams, hosted the obligatory gathering for a very small group of family and friends of the actor after a private memorial where she and his family scattered the ashes of the late actor in the San Francisco Bay, it was his second wife, Marsha Garces who held an event to honor the Williams, allowing friends and relatives of the family to join them.

Within ONE DAY of Williams’ tragic and surprising death by suicide, Schneider had his body cremated and ashes strewn across the bay, while the family was still trying to digest what happened. It all happened so fast, and given his family and closest friends were completely shocked by the suicide, it didn’t help that within 24 hours, they were already participating in his memorial service planned by his widow. Not only did Schneider take away from Williams’ children the chance to absorb the news of their father’s suicide, she also took away the chance for fans and friends of the actor to participate in a memorial or funeral for the beloved actor. It’s almost as if she had put thought into the planning of his funeral before he tragically hung himself because everything was executed within mere hours of his death.

Close friends, some family, and fans have all lost the opportunity to mourn the actor at his funeral because it happened so quickly and had been open to only those invited by Schneider. Garces, who has two adult children with the late actor, held her own gathering with relatives and friends of Williams’ and his children. His children were able to grieve, as well as celebrate the life of their father among their closes family members and friends. It was a nice event that allowed for more closure for the former couple’s two children Zelda and Cody Williams. Cody was seen surrounded by his closest friends in front of his mother’s home. The world still awaits the toxicology report which will likely be very telling as Schneider has remained steadfast in her statement that Williams’ sobriety was intact at the time of his death.

What do you think CDLers? Should Schneider have given friends and fans a chance to participant in a memorial for her late husband? Why do you think everything happened so quickly?