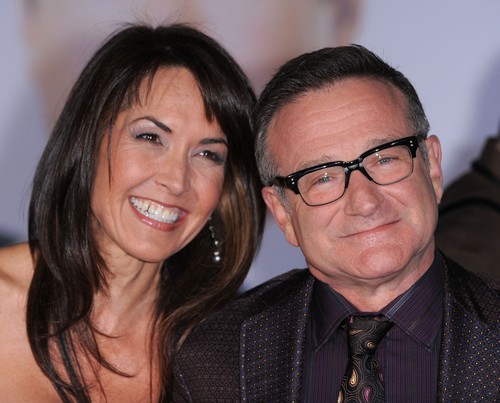 Susan Schneider, Robin Williams’ wife, woke up the morning of August 11, got dressed, did her hair and make-up, and headed out on errands around 10:30 AM, all while her husband, legendary actor Robin Williams, was hanging from his belt after committing suicide sometime after 10:30 PM the night before. Williams’ body was discovered shortly after by his assistant who apparently was concerned when he did not answer the door when she came. While Schneider apparently claimed to have believed her husband was sleeping when she left on errands, his assistant must have felt it was strange for him to still be asleep or she would not have become so concerned about him not answering the door. Given his current state of depression, she didn’t take a chance on leaving without knowing he was okay.

Not only does the scenario make very clear that Robin and Susan were having marital issues, but it also paints her as a very cold woman. Not only did she not feel a need to say or kiss her husband goodbye, she didn’t have the forethought to even check on him before leaving, knowing of his fragile mental state. I mean, the two lived in the same house. Most people would not only check on their spouse before leaving someone with severe depression alone, they would check on a friend, a roommate, etc.

So had the couple talked divorce recently? Perhaps the marital strife only added to the actor’s anxiety as he seemed to be concerned about finances as of late. His show The Crazy Ones was recently cancelled, and Williams sold his sprawling Napa estate recently as well. Given that he has made it well-known that he’s lost a fortune in past divorces, was he possibly driven over the edge at the thought of another divorce, and another hefty paycheck he’d have to come up with, being forced to take roles he did not want, and go on the road doing stand-up again.

Robin must not have liked the direction his life was going in, whatever that was. But something caused him enough pain to end his life, rather than seek his wife’s help as she apparently lay nearby in another bedroom while he apparently struggled to slit his wrists, later ending his life by hanging himself.  Did he feel he couldn’t ask for her help? Based on reports of when his body was found and the level of rigor mortis that had set in, he likely had been dead for several hours before he was found. So, in that approximate 12-13 hour time frame between Susan going to bed and his body being found, it would seem like his death occurred sometime late Sunday night. Given Susan saw him at 10:30, reportedly, before heading off to bed, what could his mental state have been like if she did not pick up on any indications that within an hour or so he was at the point of suicide?

There is something missing here. Something that likely only Susan knows now. She released a statement shortly after the death of her husband of three years was announced to the world, “This morning, I lost my husband and my best friend, while the world lost one of its most beloved artists and beautiful human beings. I am utterly heartbroken. On behalf of Robin’s family, we are asking for privacy during our time of profound grief. As he is remembered, it is our hope the focus will not be on Robin’s death, but on the countless moments of joy and laughter he gave to millions.”

Hollywood Life has reported that Susan has no plans to reenter the home where her husband took his life. A source shared, “As soon as Robin’s in his final resting place, the house is going up for sale. She absolutely cannot be there. It’s too frightening for her.”

Given Susan’s highly-attuned senses—the graphic artist described herself on her company’s website as an antenna, very in tune with emotions from people she meets as well as her surroundings—it seems strange that she didn’t detect anything abnormal about her husband’s mental and emotional state hours before taking his life because if she had, it would seem she most certainly would have checked on him at some point before leaving the house.

Your turn, CDLers. I know you’ve been carefully noting all the little details that have come to light. Tell us what you think below…was their marriage on the rocks? Was Susan negligent for not checking on her husband before leaving the house? We want to hear from you!