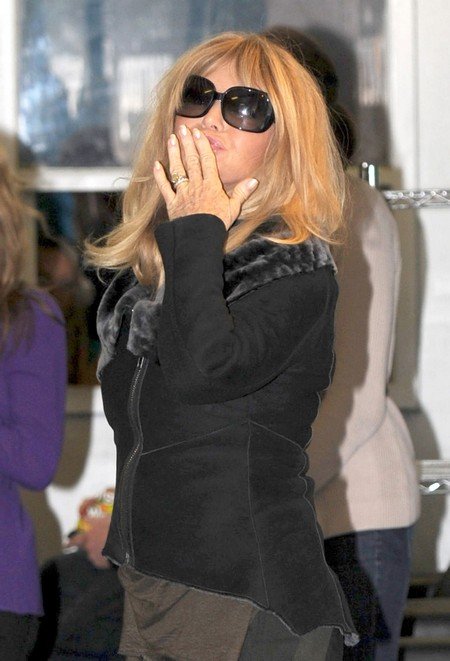 Goldie Hawn and Kurt Russell have been rock solid for 32 years now without getting married, but it looks like the longtime couple might finally be planning to tie the knot in a secret New Year’s wedding in Aspen.

Goldie was seen grocery shopping at a Whole Foods in Brentwood with her longtime partner Kurt Russell by her side. The “Overboard” actress was spotted sporting a suspicious ring on her left hand during the causal grocery shopping trip.

The gorgeous diamond band looks very much like a wedding band or maybe a low-key engagement ring. In any case, Hawn is wearing the stunner on her ring finger and that fuels the secret wedding rumors.

Prior to the wedding ring finger bling sighting, The Express reported that Goldie Hawn and Kurt Russell are planning an ultimate Wild West themed secret wedding for the new year. The shindig is said to be taking place in Aspen, Colorado.

The rumored secret ceremony will see only their closest family and friends invited. According to the report, Goldie and Kurt are going all out after finally giving in after decades and making their commitment legal.

This rumored wedding seems highly unlikely since Goldie Hawn has said that she will never marry again. The “Death Becomes Her” star spoke about her three-decade long relationship with Russell and it doesn’t sound like Hawn cares about vows.

“A lasting relationship isn’t about marriage,” Goldie said. “It’s about compatibility and communication.” Hawn went on to say “Intention is the key. It’s also about not losing yourself in each other. Being together, two pillars holding up the house and the roof, and being different, not having to agree on everything, learning how to deal with not agreeing.”

Russell and Hawn have been together since they filmed “Swing Shift” together back in 1983. Goldie brought two children into the relationship, Kate Hudson and Oliver Hudson, who consider Kurt their father since he’s the man who raised them.

Goldie and Russell also have a 29-year old son together named Wyatt Russell. While the longtime Hollywood couple seems as committed as ever, it would be pretty surprising if Goldie and Kurt get married in any type of ceremony after the stance they have taken in the past.