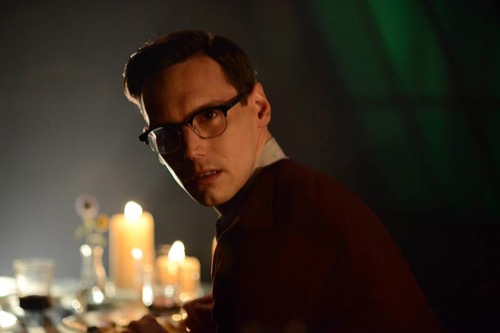 Tonight on FOX Gotham continues with an all new Monday October 12, season 2 episode 4 called, “Strike Force.” and we have your weekly recap below for you. On tonight’s episode, Barnes (Michael Chiklis) forms a task force with help from Gordon. (Ben McKenzie)

On the last episode, Gordon and Bullock hunted a nemesis from the past, which lead to a standoff between Jerome and Gordon; and a magic show at a Gotham Children’s Hospital gala resulted in a hostage situation. Did you watch the last episode? If you missed it, we have a full and detailed recap right here for you.

On tonight’s episode as per the FOX synopsis, “Barnes forms a task force with help from Gordon; Penguin is kept busy trying to fulfill a favor for Galavan; and Nygma asks Kringle out on a date.”

Jerome’s actions are still being felt in the weeks after his death. Apparently the original Joker had developed something of a fanbase. Old or young, it didn’t matter how old they were, they all watched Jerome launch a city wide attack. And some of have even begun to emulate him since his death.

Thus the city is still in a panic. Crimes is running rampant in the streets and often the cops are part of the problem rather than the solution. However that’s all changing thanks to the promise of one man. Captain Nathaniel Barnes has been designated as the new police captain and he seems like he wants to start making changes.

The new captain introduced himself to his officers by firing several of them after they committed illegal offences. And he didn’t just stop there. Barnes also told his quad that he intends to arrest any officers that stand out of line like common criminals they are. So Barnes is implantation a new way of doing things in Gotham and not everyone is happy with him.

Yet, Gordon wants to be hopeful again. Barnes is the type of man that he wished he had been working for all along. And he believes Barnes can bring about positive change if given the chance. But as things stand, Gordon is not the same man anymore.

He’s gotten his hands dirty since his golden days at the Academy. So when Barnes mentioned recruiting fresh Rookies right after graduation (before they reality made them jaded)? Gordon was all for it. He knew the young ones still had their belief system intact. Though he worried about sending kids so young out into a warzone.

He didn’t think it was fair throw them right in it and Barnes replied that they had no other choice. And, unfortunately, he was right. Penguin had also tried in his own way to reign things back in. He later spoke to his people and he made them aware of what chaos in the city was doing to their profit margins. So things were going to calm down.

But Theo didn’t want that to happen. Primarily as it would ruin his endgame. Hence, he ended up reaching out to Penguin and revealing his diabolical plans for the city. Though Theo wanted something in return for telling Penguin everything. He wanted a partnership.

Theo told the Penguin that he needed to kill everyone that was running for mayor. Like Janice Caulfield and Randall Hobbs who both had pretty good chances at winning the race. And before Theo announced that he was going to run as well – he told Penguin to make a threat on his life. However Penguin didn’t care to be taking someone else’s orders. In fact those days were supposed to be long gone. So he attempted to turn Theo’s offer down.

And that’s when Theo and his sister revealed it them that had kidnapped the Penguin’s mother. They’ve put her in some room where they could watch 24 hours of the day and so they had footage to show Penguin they weren’t kidding about a partnership. Penguin could either join them or be one of the many to suffer.

So he joined them.

Then he did their bidding. He pulled off failed assassination attempt on Theo prior to the actual murder of Janice Caulfield. The poor woman had pleaded with him and had even said that she was a mother. But Penguin couldn’t stop what someone else set in motion. Hence the only words he could offer Janice was that he has a mother too.

Yet the people that witnessed her murder weren’t as frightened as Penguin and his man thought. So Gordon and Bullock ultimately found out who was behind the assassination and the attempted assassination. And forewarning allowed them to set up extra security for Randall Hobbs.

Which meant Penguin’s plan to send in Victor Zsasz was not foolproof. And it gave Gordon the final piece of evidence he needed to prove that the Penguin was interfering in politics now.

Meanwhile, the person that caused all of this strife, was busy make friends out a young Bruce Wayne. Bruce had become something of a loner since his parents’ murder so Theo found the best way to align himself with a hormonal teenager. He simply introduced Bruce to his young and pretty niece who by the way will soon be joining him at school.

Unbeknownst to Bruce, Alfred had chased Selina off when she tried to see them and he warned the young girl that he wouldn’t be tolerating her presence around the young master. So Bruce was sadly in the prime position to be used by a “friend” and Theo was going to use that.

But as for the Penguin and Gordon, Gordon warned the other man that aren’t any more deals left. Not with this new captain around. And if Gordon has to pay for what he’s done then he told Penguin that he was willing to pay the price.

So Theo has the police looking into taking down the Penguin while he gets to run for mayor.