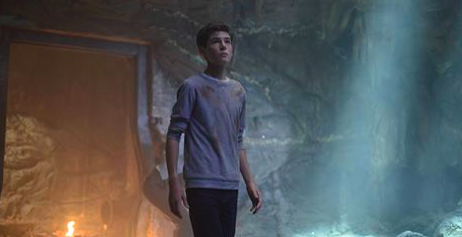 Tonight on FOX Gotham continues with an all new Monday October 5, season 2 episode 3 called, “The Last Laugh.” and we have your weekly recap below for you. On tonight’s episode, Gordon (Ben McKenzie) and Bullock (Donal Logue) hunt a nemesis from the past, which leads to a standoff between Jerome and Gordon.

On the last episode, Gordon investigated the inmate escape from Arkham Asylum; Galavan plotted his next move; Bruce’s quest to unlock the secrets of his father’s office lead him to an old friend of his father’s; and Nygma wanted to ask Kristin Kringle on a date. Did you watch the last episode? If you missed it, we have a full and detailed recap right here for you.

On tonight’s episode as per the FOX synopsis, “Gordon and Bullock hunt a nemesis from the past, which leads to a standoff between Jerome and Gordon; and a magic show at a Gotham Children’s Hospital gala results in a hostage situation.”

Theo Galvin has a plan for the city. He mentioned to Barbara that he wants to reclaim it in the name of his forebears. His ancestor having apparently built the city from scratch but were pushed out of the limelight. But this plan of his came with a flaw. It required grunt work that he didn’t want to do himself. Hence he came up with the idea of turning to the lunatics and using them to exact some kind of revenge for him.

All the while none of Gotham’s finest knows who’s really pulling the strings.

A neat plan. However there was a problem in the way he ran things. While Jerome was a considerable weapon to have in his arsenal, he shouldn’t have left the younger man off his leash. The young man ended up taking detour that led to death of his father.

Jerome’s father was the circus’s psyhic and truthfully he was quite good at his job. But as father, he was somewhat lacking. He once told Jerome one day, after finding the ten year old crying on his birthday because his mother and her boyfriend beat him, that the world was cruel place and that he just had to get used to.

So that’s what Jerome did. He got used to the world being full of horrible people and he decided it was better to become one of them than remain a victim all his life. Meaning it was that revelation that helped Jerome go on to become the man he did.

And as a parting gift to his dear old dad, Jerome used his body to carry a knock-out gas that was made primarily for the GCPD. Bullock and Gordon had arrived on the scene not long after Jerome and sadly they fell for the trick he left behind. So the two men were knocked out and Jerome had the chance to kill them if he liked. But that’s when Tabitha stepped in.

She reminded Jerome that they have a much better game waiting for the detectives. And unfortunately that game was going to be at the nearby charity dinner for the children’s hospital.

The same charity dinner that just about everyone was attending. Dr. Lee Thompson was the MC for the night and she seemed to have attracted Alfred. So Alfred made Master Bruce stay at the dinner even though the kid wanted to go home. And the reason he wanted to go home was because he ran into Selina who couldn’t get away from him fast enough because Bruce was being a tad sanctimonious about the real reason Selina was at the party.

So it was a night set up for disaster. The wealthiest were in attendance including Deputy Mayor Harrison Kane. And to matter worse, Jerome had tied up the entertainment for the night. So that he may step in as the magician.

The magician was hired to entertain the kids but the magician’s role was actually a lot more than merely making people laugh. He was also supposed to make them want to be willing participants in the show. And after Bruce survived being split into two, well, who would guess that there was another story behind a magician.

No one that is except Lee. There was just something about the magician’s assistant that sent off her internal alarm and when she finally realized that it was Barbara – it was much too late. She barely got a call out to Gordon before she was snatched and a bloody rampage ensued.

Jerome went on to kill the Deputy Mayor. And that’s when Theo’s plan became clear. He’s gotten rid of the Mayor and the Deputy Mayor in a very short time span. Almost as if he wanted to create a gaping hole in Gotham’s infrastructure.

So it’s no wonder that Theo was the only person to stand up to the criminals who were filming the whole thing.

He made a grand speech about allowing the others to return to their families. Then he offered up himself as a hostage. Saying that he would gladly stand in for those that would be allowed to go home. So Theo was setting himself up as a hero and the only one that didn’t see that was Jerome.

Jerome and Barbara pretended to knock Theo unconscious. And afterwards they proceeded with threatening the audience. Even going as far to point a gun at Alfred in order to get Bruce to come out of hiding.

Bruce had had a chance to run. Selina had offered him one. Yet he couldn’t leave Alfred behind so he turned back and before he risked everything, Bruce ran into Gordon. Gordon had sneaked into the building. And he came up with a plan.

He snuck a gun into Bruce’s jacket knowing that Alfred would try to stop him. And when the right moment struck, Gordon and Alfred took out all of Jerome’s men. However the night wasn’t over yet. Jerome had a knife to Bruce’s neck and none of the men had a clear shot.

So, just as Jerome was about to begin carving, Theo regain consciousness and suddenly snuck a knife right into Jerome’s neck.

And Barbara wisely escaped in the following mayhem though that’s not the part the news decided to highlight.

Theo killed a villain and that’s how he became the hero of the night. See, Theo was seen by the elite and over broadcasted television as being the one to save young Bruce Wayne. So naturally he milked the situation and later gave an interview about how they should take back the city.

But Bullock has come to an agreement with Gotham’s reigning crime boss, even it was agreed to under duress, and a new captain has yet to be appointed at GCPD.

So having a third person come onto the political scene is just going to cause problems no one wants to deal with.

However, Theo should be careful on the homefront. It doesn’t look like sister likes sharing Barbara with her brother.