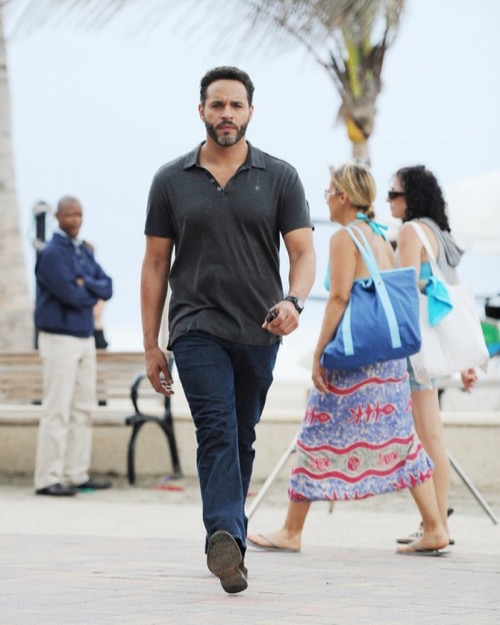 Tonight on the USA Network Graceland returns with an all new Thursday July 16 season 3 episode 5 called, “Piñon Tree.” We’ve got your recap down below! On tonight’s episode The death of an agent leaves the housemates reeling.

On the last episode when Ari Adamian (Rhys Coiro) had no recollection of his actions, Briggs (Daniel Sunjata) helped the Armenian gangster piece together the disturbing details of his lost night. Did you watch the last episode? If you missed it we have a full and detailed recap, right here for you.

On tonight’s episode per the USA synopsis “the death of an agent leaves the housemates reeling; Briggs and Johnny work to rescue Lucia, who’s being held by Carlito Solano; and Mike’s visions lead him to a small-time crook with a dangerous secret.”

Tonight’s episode looks like it is going to be a great premiere and you won’t want to miss it, so be sure to tune in for our live coverage of USA Network’s “Graceland” at 10:00 PM EDT! While you wait for our recap hit the comments and let us know how excited you are for this episode of Graceland tonight. In the meantime, check out the sneak peek below of tonight’s episode.

It’s all over for Paul on tonight’s episode of “Graceland”. Not only did an agent die on the job but Paul lost Ari just when he was winning the other man’s trust.

Ari was able to talk his way out of trouble with Sarkissian. However Martun no longer trusts him and more importantly he blames Paul for what happened to his daughter. Paul was the only one that had a connection with Colby so even Paul is innocent of his friend’s crime– dirt sticks.

And this time everyone is getting painted with the same brush.

Ari lost most of his territory thanks to his secret relationship with Leila. And so he wasn’t in the mood to hear Paul out. Even as the other man tried to convince him to maneuver his way back into Martun’s graces.

Ari is just done. With his territory and with Paul. So, despite everything he did, Paul had nothing to hand over to his bosses at the bureau. And his friends for one were tired of his games.

Back at the house, Colby death’s ended up affecting everyone differently. There was Paige who wanted to go into full on vendetta mode in Colby’s honor but the rest of the guys felt like there were done with Paul as well. He keeps dragging them into things that end with a dead body.

So Johnny and DJ were probably the most vocal when they questioned Paul’s plan on getting back in. They apparently had stopped defending him and now were part of a group that questioned his motives. Because to go after Sarkissian had to be about bringing down a known criminal – not Paul simply fixing his mistakes.

But Mike was on the fence. He was tired of the body count yet didn’t feel like he could sit on his hands and do nothing.

And that’s how Paul managed to talk him around. At least until his judgment was trusted once again. See Paul targeted the side of Mike that demanded someone finally pay and Mike received his help in finding out where a new shipment was about to be dropped.

A new guy by the name of Vin was cornering a small illegal empire for himself. And Mike was set on infiltrating this young man’s upcoming group. But in order to do that he had to be around Vin who seemed happy go lucky while at the same time slightly sociopathic.

On their second meet, Mike was invited over to Vin’s house where he witnessed Vin boiling dynamite in his kitchen. Apparently the other man wanted to make nitroglycerin and used to do this all time when he went fishing. Hence the reason he called Mike over was for Mike to use the unstable chemical to open a safe for him.

So Vin is nonchalant about everything but he is still very much a criminal.

And after Mike helped steal some gold teeth of all things, Mike did some snooping around on his guy and he learned that Vin was sitting on a tank of Saran gas. Now Mike didn’t know what this kid wanted to do with it but knew Paul needed to know that there’s a possible deal at play. If Vin had Saran gas then that meant he had a seller.

In the meantime, though, someone in the house was finally allowed to close a case. And surprisingly it was Johnny.

Johnny had been working within the Caza cartel hoping to bring down the young boss Carlito. However Calito’s sister and what Johnny felt for her almost got in the way. See, he had serious feelings for her and naturally she was his first concern in bringing down her brother.

The same brother, mind you, that later wanted to kill her and had had locked up in a room. So Johnny went to Paul for help in gaining her release and he started a cartel war that ended in most of Carlito’s men turning up dead but with Carlito hiding out in his backseat.

Johnny was then able to take Carlito back to the states and arrest for his crimes him yet somehow he still lost out on Lucia. Lucia was of a mind to kill her brother rather than allow him to live out the rest of his life in prison. So, although Johnny didn’t listen to her, she felt like she had crossed a line that in the end meant she couldn’t be with someone as good as Johnny.

And with a win for the house, it came at a personal cost for Johnny.