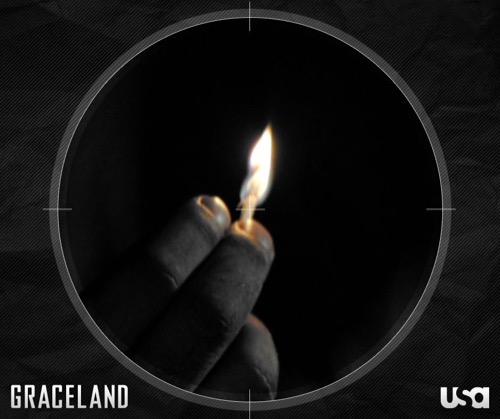 Tonight on the USA Network Graceland returns with an all new Thursday July 16 season 3 episode 4 called, “Aha.” We’ve got your recap down below! On tonight’s episode Briggs [Daniel Sunjata] helps Ari Adamian remember the events of a night he can’t recollect.

On the last episode while Mike’s (Aaron Tveit) visions and addiction to pain medications started affecting his ability to function in the field, Briggs (Daniel Sunjata) coaxed a former FBI agent out of retirement to help take down Ari (guest star Rhys Coiro). Did you watch the last episode? If you missed it we have a full and detailed recap, right here for you.

On tonight’s episode per the USA synopsis “when Ari Adamian (Rhys Coiro) has no recollection of his actions, Briggs (Daniel Sunjata) helps the Armenian gangster piece together the disturbing details of his lost night.”

Tonight’s episode looks like it is going to be a great premiere and you won’t want to miss it, so be sure to tune in for our live coverage of USA Network’s “Graceland” at 10:00 PM EDT! While you wait for our recap hit the comments and let us know how excited you are for this episode of Graceland tonight. In the meantime, check out the sneak peek below of tonight’s episode.

There’s such a thing as going too far and on tonight’s all new episode of “Graceland” that’s exactly what Briggs chose to do.

See Briggs was assigned a task earlier. In which he was told that it was his top priority to take down Ari Adamian. The go-to guy in the Sarkissian crime family. And Briggs was also told that if he failed at this then it would be Briggs that would have to face a potentially damaging court trial.

Thus Ari was Briggs sole mission and, after going for what felt like weeks without progress, Briggs decided to up the ante. He staged a huge scene that Ari has no recollection of creating and then it made appear as if Ari possibly went against the Sarkissan family. So not only was Ari’s life put at risk but Briggs made sure to make himself nearly indispensible to someone bottoming out.

And that was a new low!

Ari woke up in his car that had damage to it. And he was covered in someone else’s blood. So at first he did suspect Briggs of messing with him. Yet confronting the other man led to nowhere.

So that’s when Ari took Briggs up on his offer to retrace his steps from last night. Starting from that gas station that Briggs just happened to find a ticket for. And ended up in a gun fight with Mike that happened to be playing his part in the whole charade quite brilliantly.

Mike pretended to be an angry/ drugged up convenience clerk and from there they dropped bread crumbs. He implied that Ari had caused a big freak-out in the store after realizing Mike didn’t have his special cigarette brand. And he said the one other thing he remembered was that Ari had been using a woman’s credit card.

Mike could only recall the name “Layla” but Ari never did get the chance to properly interrogate him. Martan had showed up and, as it turns out, he was looking for that daughter of his that never came home last night. So what Briggs really was doing was setting Ari up for a great big fall.

Beside the false credit card lead, the guys had also gotten to Martan’s cabin out in the woods. There they left marks of a dragged a body (namely Dale’s but no one else knows that) and ended this trail with the reminsece of a burned body. Again it was actually burned monkey bones “borrowed” from the local university but the results were the same as if Layla really had been killed.

Martan flipped. He wanted to hunt whoever it was that had allegedly hurt his daughter meanwhile Briggs was working on the side to “help” Ari remember whether or not he killed someone. Hence he won Ari’s trust then he played with it until he had Ari putty in his hands.

Ari later found a motel room that was covered in blood and that made his situation look worse.

After all he didn’t remember how he got blood all over himself but the last thing he did recall was meeting Layla in the bar. His memories are fuzzy yet he said Layla was wearing a red dress and low and behold a red dress was found in the bloody motel room. So Ari found the room too incriminating to leave behind. And was set on burning the entire motel down in order to leave no trace of himself behind when the lit match brought back some of his memories.

He had woken up earlier with his finger burnt but he now remembers that he never lit a match with that particular hand.

So that’s when Ari realized he had been played and it was what made him send Martan after the real person that had Layla – Colby. And now Colby’s dead because Briggs wanted to do his own take on the Hangover franchise!