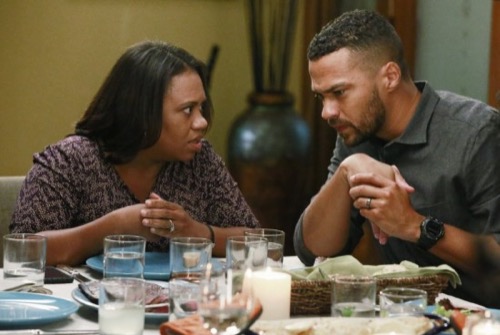 Tonight on ABC Grey’s Anatomy returns with a great all new Thursday October 22, season 12 episode 5 titled “Guess Who’s Coming to Dinner” and we have your weekly recap below. On tonight’s episode, Maggie (Kelly McCreary) leaves her dinner party and races to the hospital, so April (Sarah Drew) takes over the cooking duties in an attempt to dodge Jackson. (Jesse Williams)

On the last episode, Owen suggested the interns learn a vital lesson on how to break bad news to patients’ families, and Arizona’s 90-year-old patient reassured her that she’s destined to find love again. Meanwhile, the sisters completely forget about the dinner party they’re hosting for everyone. Did you watch the last episode? If you missed it, we have a full and detailed recap right here for you.

On tonight’s episode as per the ABC synopsis, “Maggie leaves her dinner party and races to the hospital, so April takes over the cooking duties in an attempt to dodge Jackson. Meanwhile, Arizona is anxious about meeting Callie’s new girlfriend.”

This episode looks like it is going to be a great episode and you won’t want to miss it, so be sure to tune in for our live coverage of ABC’s “Grey’s Anatomy” Season 12 Episode 5 at 8 PM EST!

It was kind of chaotic at Meredith’s house. She seemed to have invited a bunch of people to dinner yet was failing at providing an actual dinner.

So her guests for the most part were simply standing around and drinking. And normally Meredith could have been fine with such a situation, but on tonight’s episode of “Grey’s Anatomy” she didn’t want to find herself having to make conversation with Callie’s new girlfriend. Not that she has anything personally against Penny.

Penny after all appears to be a nice a woman so Meredith’s inability to barely speak with her is not her fault. However Penny just happens to be the doctor that had told Meredith after her husband that it was her job to save Derek’s life and she failed. And so it’s hard for Meredith to even look the other woman in the eye.

Furthermore, Penny’s presence had Meredith off balance. She was supposed to be cooking because Maggie had to go down to the hospital and as it turns out Meredith doesn’t know how to cook. But she was trying to do it anyway just avoid socializing and that’s how she gave herself a nasty cut.

Alex treated her cut for her and fortunately April took over in the kitchen. Yet Meredith’s night didn’t get any better. Callie was called away afterwards and but she had told Penny to stay at the dinner party. She had really wanted Penny to get along with her friends and so she asked Meredith and Alex if they would look after her. And promised that she would be back soon.

But Callie was not back in time for dinner. For despite all possibilities, April was able to do a good job in the kitchen and she even had dinner prepared a whole meal without once talking to her husband. So everyone did want to be on their best behavior and it might have continued if they hadn’t all sat down at the same table.

Arizona was drunk so she took to calling Penny “Perfect Penny” and eventually Penny’s full name rang a bell with Bailey. See, she suddenly remembered that she was about to interview a Penelope for a position at the hospital and that was Penny. Penny was about to join the Grey Sloan Memorial Hospital family and when Meredith heard that – she snapped. She told everyone at the table that Perfect Penny killed her husband.

She revealed that it had been Penny at the Dillard Clinic that night and that she had been on Derek’s case. Then she ran off leaving it to Alex to follow her. So it had been Amelia that stayed at the table and demanded to hear the full story.

Amelia made Penny tell the whole story. Beginning with Derek came in and how someone decided to skip a CT-scan so that they could push ahead with surgery. And in the middle of the story – Callie and Owen had come in.

Callie of course hadn’t known that Penny was Derek’s doctor but she refused to let Amelia blame the other woman for killing Derek. So Owen took it upon himself to escort Amelia out of the room. However Amelia was not done falling apart. She later went to Meredith’s room and was proposing how the board could still fire her even if her job had been a foregone position when Meredith yelled at her.

Meredith loved Derek just as much as Amelia. Though Meredith never got the chance to fall apart, she has three kids that she had to be strong for and she didn’t think it was fair that Amelia was also trying to blame her for not saying anything when Penny first walked in. In other words she told Amelia that she wasn’t the right person to unleash on and then demanded that Owen remove her before she killed her.

But dinner came to an abrupt end.

The guests stayed on to clean up after themselves and while they working together they also got to talking. April remembered when she had made a mistake as a resident and how that mistake had always lived with her. Yet Jackson reached out. He said it wasn’t her fault and that a lot of people made mistakes in that instance.

And Jo finally got around to apologizing to Stephanie. She had overheard Amelia afterwards and had realized Stephanie hadn’t been lying about being sick as a kid. So she didn’t try to find excuses, she just apologized and Stephanie accepted her apology.

Therefore at the end of the night, everyone pretty much realized they didn’t want to go home upset. Including Maggie who had rushed down to the hospital. Though not because of an emergency but because she had a “burning sensation” that she feared was a result of her two-night stand.

It wasn’t but she did run into her midnight lover at the hospital and the two got to talking. And it looks like they’re trying to work on having more than just sex.

And in an odd twist of events, Meredith let Penny know that she would see her Monday at work. Meaning she doesn’t want Penny to give up her opportunity at the hospital.

But not everything sunshine and rainbows, Jo managed to upset Stephanie not long after they made up and now the two are at odds again.