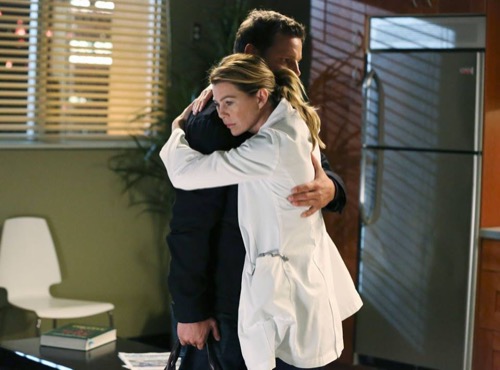 Tonight on ABC Grey’s Anatomy returns with a great all new Thursday October 1, season 12 episode 3 titled “I Choose You.” On tonight’s episode, Maggie (Kelly McCreary) reflects on her life when her old beau gets married.

On the last episode, Bailey began her first day as chief of staff and felt the pressure that accompanied the position. Meanwhile, April found her marriage was in peril; Meredith had trouble balancing her many obligations; and Amelia tried to define what she had with Owen. Did you watch the last episode? If you missed it, we have a full and detailed recap right here for you.

On tonight’s episode as per the ABC synopsis, “Maggie reflects on her life when her old beau gets married. Meanwhile, Bailey’s allegiance is questioned by Richard; Jo tells Stephanie a secret she’s been hiding from Alex; and Alex faces a tough decision regarding newborn twins.”

This episode looks like it is going to be a great episode and you won’t want to miss it, so be sure to tune in for our live coverage of ABC’s “Grey’s Anatomy” Season 12 Episode 3 at 9 PM EST!

Arizona was only supposed to oversee a traditional twin birth on tonight’s episode of “Grey’s Anatomy”. Basically where she just catches them after the mother had pushed. However she noticed something on the ultrasound and it was strange enough for her to ask her resident to call down Alex.

Alex though wasn’t able to see her patient until right after the mother had given birth. So by then it was already too late.

The babies had been born jaundiced. At birth, their skin was abnormal shade of yellow and so Alex ran brain scans on both babies. And found out they had been suffering from a tumor. In fact the same tumor because they had developed cancer in utero.

The tumor was located on each of the babies’ livers. So what that meant was that they needed a liver transplant. Yet, based upon their conditions as birth, neither infant could afford to wait around on the universal donor list. And so the parents were tested.

Fortunately, their father Mason came back as a match but their mother Laurie did not. And seeing as Mason could only donate so much of his liver – it then fell upon Alex to decide which baby was going to live. But in his current circumstances, that wasn’t a decision that Alex wanted to make.

See, Jo asked him out of the blue if he wanted kids and because it threw him he didn’t necessarily come up with a great or even good answer. But he thought it was weird of her to ask him that all of sudden. So he talked about it with Arizona and Arizona said maybe Jo was testing the waters. As in she’s already pregnant but wanted to know he felt about kids before dropping the bomb on him.

So Alex isn’t just seeing someone else’s kid. He’s envisioning what would happen if he does turn out to be a parent.

Yet after a grueling day trying to find a way out of an impossible decision, Alex went home to Jo and the two finished their earlier conversation. Apparently Jo had found an invoice from the fertility clinic that Alex had used with Izzie. Their embryos are still be kept and so Jo wanted to know why he was so ready to have kids with Izzie but not with her.

And that simply wasn’t a conversation that Alex was prepared to have. So he returned to the office and again checked all of the scans. Though he seemingly worked throughout the entire because that’s what he was still doing when Meredith finally caught up with him.

Meredith had gotten her contract as the new Head of General Surgery and most of her friends keep making faces when they see it for themselves. Thus she had to get one of them to explain and Callie told her that her contract was lowballing. So Meredith went to Alex to find out how much he’s making as Head of Pediatrics. But he saw he needed friend more than she needed advice.

Alex was doubting every decision until he got to the point where he wanted to pawn it off on Bailey. Make her choose which baby to save. Yet Arizona talked him out of it. She told him that he was great doctor and that he had to follow his instincts on this one.

So Alex came up with a controversial decision. He decided to open both babies up in order to take a look at their respective tumors and see for himself who had a better chance at surviving the transplant. And in the end he chose the girl. Her name is Emma.

The parents had named their children before they were taken into surgery so that if anything they had a name. However Daniel wasn’t as lucky as his sister. Alex had tried to find another method to keep him hanging on and the baby still didn’t live out the rest of the day.

Bailey, Richard, Arizona, and Ben had been watching the surgery in the seating area so they saw when Alex had to give up.

Though just before they witnessed that, Richard had been trying to start an argument with Bailey about Meredith’s contract. And Bailey told him that maybe it was time for Meredith to start fighting her own battles. Instead of Richard always coddling her.

Meredith hadn’t even approached Bailey so until she did, Bailey told Richard to not create an issue. Only Meredith did eventually go to see Bailey and surprisingly she reworked her contract all on her own. Without anyone’s help.

So Bailey was proud of Meredith.

And as for the latest chapter in the April and Jackson saga, Jackson moved out of their apartment and went to go stay with Ben and Bailey.

April hadn’t believed him when he brought up divorce but coming home to an empty apartment is the one that could disillusion her.

Though, for Alex, he went home ready to try for a baby.