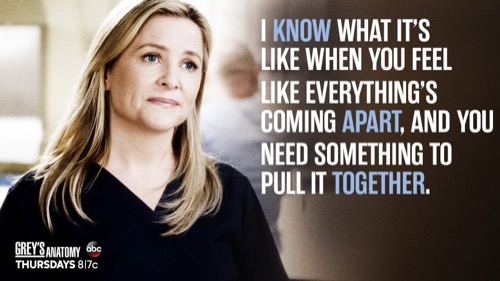 Tonight on ABC Grey’s Anatomy returns with a great all new Thursday November 12, season 12 episode 7 titled “Something Against You,” and we have your recap below. On tonight’s episode, a high-stakes case is tackled by a team of doctors, and the atmosphere grows tense.

On the last episode, a transfer resident arrived at the hospital. Meanwhile, Richard wanted his relationship with Maggie to evolve; gossip followed a patient who mistakenly sent his sex tape to his congregation; and April presented a case involving a boy from the Middle East. Did you watch the last episode? If you missed it, we have a full and detailed recap right here for you.

On tonight’s episode as per the ABC synopsis, “a high-stakes case is tackled by a team of doctors, and the atmosphere grows tense. Meanwhile, Bailey pressures Ben to evict their roommate; and Arizona enthusiastically reenters the dating scene with a new wingman.”

This episode looks like it is going to be great and you won’t want to miss it, so be sure to tune in for our live coverage of ABC’s “Grey’s Anatomy” Season 12 Episode 7 at 8 PM EST!

Meredith was honestly going easy on Penny. Apparently the talk she had with Richard last week helped put things in perspective for her and now she treats Penny as any other Resident. If not just a little bit better.

However Callie still believed that her girlfriend was being run ragged so she went behind said girlfriend’s back in order to have her own talk with Richard. And with him, she tried to play off her favoritism as an actual concern for the current resident rotation system. Only no one was buying it and she had Amelia to contend with.

Amelia had been in the area when Callie began had little speech and so she called Callie out on what she really was doing. Callie wanted Penny to be put on someone else’s rotation because she felt like she wasn’t getting enough time with her girlfriend. Yet Penny herself had made no complaints.

So Richard had said he wasn’t going to do anything until Penny had something say. And she didn’t have a word against Meredith at the time though she really should have stuck up for herself from the start. Meredith had gone from bullying her to treating her with kid gloves.

Therefore someone had to ask what was going on and Owen was the only one enough brave enough. He went right up to Meredith and asked her why she was treating Penny the way she was and all Meredith had to say was that she didn’t want to give Penny the chance to kill anyone else. So the truth of the matter was that Meredith hadn’t forgiven Penny.

Meredith still mistrusted the other woman and the kid gloves was really a way for her to treat Penny like some kind of imbecile. And so Callie later went directly to Meredith to confront her.

Callie attempted to tell Meredith that she still wasn’t taking her responsibility seriously as a teacher yet Meredith didn’t want to hear it. Callie had yelled at her for being too harsh and was then yelling her for being too lenient. But Meredith said Callie wouldn’t have anything to say if it had been any other resident.

And she was right.

But, in the meantime, there was a patient that combined influences of Meredith and Callie. An elderly gentlemen with a rare blood type had finally found a kidney after waiting for year. And just as he shows up at the hospital – he’s diagnosed with cancer.

It seems it was cancerous tumor and it was located on top of his head. So Amelia said she could do in and scoop out the entire tumor. However Callie couldn’t figure out how she would be able to close the whole in the patient’s head.

So the residents were all asked to go look for answers but Penny was told to watch over the brain dead donor.

And elsewhere in the hospital, the return of Dr. Riggs has seemingly set off some of Owen’s PTSD. Now it was revealed last week that they knew each other over seas yet there was no explanation for the animosity that Owen had for Riggs. Or why he tried to fight Bailey’s decision to hire Riggs for the cardio department. Though what is known is that Owen doesn’t like him and neither does Maggie.

Maggie was the department head for cardio and so she felt personally insulted that someone had been hired for that exact department without her say so. And not only that but she found Riggs to be too much of an Alpha male. On his first day at the hospital, he pushed his way onto her case and then tried to dictate what they would do with the patient.

Nevertheless, Maggie was the one in charge and she eventually reasserted that and well befriend Riggs in the end. So it was Owen that had a problem and Owen again who created a scene in front of both Amelia and Bailey.

Yet Mr. Jaffee’s kidney and skull transplant was a success. Wilson had come up with the idea to transfer the skull and that meant Jaffee could keep the kidney that was so hard to find. And one other thing happened in surgery – Meredith finally gave Penny a task.

Penny had chosen stand up for herself rather than let Callie fight her battles and she won Meredith’s respect by demanding to be taught. And it was after that successful surgery that Meredith was then able to be there for Owen. Apparently she had remember her promise to Cristina to be Owen’s person if he needed one.

And now she hates Riggs too although Riggs had actually wanted to flirt with her a little bit.

But Arizona wanted to try out dating again and Richard ended up as her wingman. As it turns out April was busy that night have regrettable sex with her husband Jackson.

So I can’t wait for the winter finale.