Grey’s Anatomy Recap – ‘The Me Nobody Knows’: Season 12 Episode 6 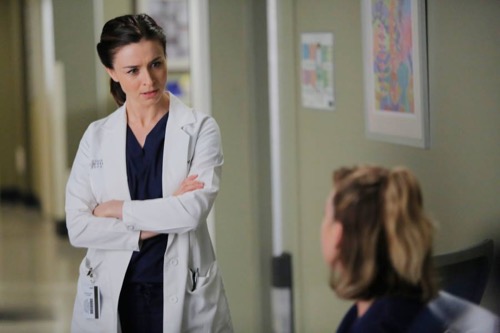 Tonight on ABC Grey’s Anatomy returns with a great all new Thursday November 5, season 12 episode 6 titled “The Me Nobody Knows,”and we have your recap below. On tonight’s episode, a transfer resident arrives at the hospital.

On the last episode, Maggie left her dinner party and raced to the hospital, so April took over the cooking duties in an attempt to dodge Jackson. Meanwhile, Arizona was anxious about meeting Callie’s new girlfriend. Did you watch the last episode? If you missed it, we have a full and detailed recap right here for you.

On tonight’s episode as per the ABC synopsis, “a transfer resident arrives at the hospital. Meanwhile, Richard wants his relationship with Maggie to evolve; gossip follows a patient who mistakenly sent his sex tape to his congregation; and April presents a case involving a boy from the Middle East.”

This episode looks like it is going to be a great episode and you won’t want to miss it, so be sure to tune in for our live coverage of ABC’s “Grey’s Anatomy” Season 12 Episode 6 at 8 PM EST!

At that disastrous dinner party, Meredith had decided to let bygones be bygones and had simply given the other woman her consent to work at the same hospital. However that decision didn’t come without its price. And because of Meredith’s generosity at the time, Amelia hasn’t spoken to her since.

Then again Amelia was still struggling with how to move pass Derek’s death so her silence wasn’t that much of a loss. Especially as Amelia didn’t know any middle ground as she went about handling things. She was either all over the place or was falling apart ready for anyone to put her back together again. Like Owen for instance. And that was just something Meredith didn’t need when she was busy with three kids as it is.

So the house was left kind of quiet following that dinner from earlier and Maggie didn’t know how to fix the rift between her roommates. But at the same time she didn’t know how to deal Richard. A friend of his had come to the hospital with his own daughter and for some reason Richards didn’t seem that interested in introducing Maggie as his daughter. Instead he pretended she was another doctor at the hospital and made her feel like an outsider when he could have welcomed her.

Although, truthfully, Maggie didn’t know whether or not she wanted another father in her life. Not when she came to Seattle to meet her sister and that wasn’t panning out but Richard could have at least not have denied he had any kids in front of her.

And speaking of rash decisions, April had brought Jackson a unique case. Apparently she had met a child from Jordan that had lost everything and so she wanted to help the little boy who was also suffering from Ollier’s disease. Yet, April being April, she just had to go about it the wrong way.

First she pretended to lose the little Kamal’s x-rays and then she dropped an extremely difficult case on Jackson’s shoulder. So he walked into a situation unprepared and was left with little choices. Like he knew he couldn’t operate on the child but he was aware that April had built Kamal’s dreams up because she had become fixated with the case.

So Jackson ultimately decided to see what he could do for Kamal even if it wasn’t much. And enlisting Callie’s help, they went into surgery prepare do the most they could in order to save what little of Kamal’s hands were left.

But Meredith it seems only pretended in wanting to move on. For she never gave Penny an actual chance. She just used every opportunity available to belittle and bully Penny when she could and then tried to explain her own actions by claiming Penny wasn’t qualified enough for the hospital.

Though that wasn’t true and deep down Meredith knew that as well long before Callie took her to task for her behavior. So Meredith had to grow up on tonight’s episode of “Grey’s Anaotmy”. If she said she wanted to move on then she could at the very most try to do that. Instead of looking for a way for Amelia to be right.

And as for Amelia, she could just stop looking for a way to get Penny fired. Particularly as it was revealed that Richard had prior knowledge of Penny and Derek’s relationship yet still chose to hire her because he had faith in the young doctor’s skill. So both Amelia and Meredith had to accept Richard’s judgement.

Meanwhile Richard finally worked up the courage to say he has a daughter. Though he didn’t exactly name Maggie because he wanted her to have the choice about whether or not she wanted to introduce herself as his daughter.

And in the end Jackson did pull off a miracle. He managed to dig through cartilage and find the necessary bones he needed to rebuild Kamal’s hand. Therefore April felt she was right to put so much faith in him and, surprisingly, the two didn’t argue afterwards. Rather they appeared to be fixing their broken relationship.

Though for some reason I think the new guy, Nathan Riggs, is going to cause problems between them. See Nathan is a friend of April’s. He happened to have worked with her overseas and Owen, who knows him too, knows him well enough not to trust him.