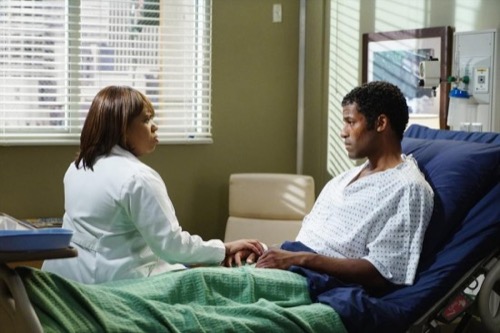 Tonight on ABC Grey’s Anatomy returns with a great all new Thursday February 19, season 11 episode 12 titled “The Great Pretender,” and we have your weekly recap below. On tonight’s episode, Meredith [Ellen Pompeo] evades Maggie’s questions about Washington, D.C.

On the last episode, after several discussions with Dr. Herman, April and Jackson had to face their situation head on and make a difficult decision regarding their unborn child. Catherine arrived in Seattle and bumped into Richard at the hospital. Meanwhile, Meredith tried to find someone to take care of the kids so she can visit Derek for the weekend, and Amelia showed Stephanie some tough love when they work together on a case. Did you watch the last episode? If you missed it, we have a full and detailed recap right here for you.

On tonight’s episode as per the ABC synopsis, “Meredith evades Maggie’s questions about Washington, D.C. Elsewhere, Ben’s brother is admitted to the hospital, which causes Ben and Bailey to worry; and Dr. Herman begins to see Arizona in a positive light.”

This episode looks like it is going to be a great episode and you won’t want to miss it, so be sure to tune in for our live coverage of ABC’s “Grey’s Anatomy” Season 11 episode 12 at 9 PM EST!

Life was carrying on as normally as possible, or better yet as normal as this particular hospital can ever get, on tonight’s all new episode of “Grey’s Anatomy” when Ben came rushing into the building on his day off after his brother had suffered a nasty fall. Earlier, the two men along with Bailey were spreading out Ben’s father’s ashes when Curtis began to feel off. At first Curtis tried downplay his symptoms but after he lost consciousness and went tumbling down a hill – his brother and sister-in-law were simple going to ignore his wishes and have him properly checked out. However Curtis eventually came to and it seems like to forego all treatment. So his attendee, the recently returned Meredith, had to talk him into seeking medical help even if he didn’t want to listen to his family members.

And, when it was just the two of them, Meredith was able to persuade her patient to get the help he needs. Curt did all the tests and he was shown to be suffering from organ failure. Luckily, though it was only the spleen. But then Curt did something odd. He had Meredith keep his condition, whatever it is that caused the organ failure, under wraps.

He didn’t seem to want to talk it over with his brother and in fact he appeared to be dreading the moment the truth would/could come out. So Bailey started to make guesses of her own. And she asked Meredith if her brother-in-law’s condition have something to do with the way he shaves his chest or that his eyebrows are waxed into a better condition than hers.

And it turns out Bailey had a point with where she was going with all her questioning.

Curtis is not dying. He’s actually transitioning. Meaning he wants to go from being a man and turn into a woman. Though with Transgenders, like Curt, they usually say they’re transforming into the body they’ve always been.

But in certain communities, like the black community in which both Curt and Ben belong to, women like Curt aren’t generally accepted. If anything they tend to have a fight on their hands. And when Ben found out from Bailey that his brother was transitioning into a woman – he first laughed (because he thought it was a joke) and then he questioned his brother’s mental ability

So as Ben tries to accustom himself to the news – he’s struggling and admittedly also acting out of character because of it.

He told his wife that his brother had been lying to him for years and that he wanted to cut Curtis out of life for doing so. And that’s not something Ben would have said about any other patient that was transitioning.

Speaking of abnormal behavior, though, Dr. Herman is acting strangely and Own needed to know if her tumor has affected her behavior. Lately, Herman has stolen a couch from the common’s room and on top of that she’s oddly been acing quite cheerful. She’s been seen laughing around the hospital and suddenly she’s even acting all buddy buddy with Arizona.

Arizona’s full and complicated life, once all explained to Hermann, is now interesting. The whole cheating on her wife and sleeping with residents thing has provided their own laughs. And now Hermann is actually seeking Arizona out to have some time to chat on other things besides their cases.

So it’s odd and Owen felt something must have been really wrong if the infamously stern doctor was also outrageously flirting with him. Although since she came onto him, Hermann hasn’t exactly tried her luck a second time. She’s just been giggling with Arizona.

Arizona had found out from Herman that the other woman had practically moved into the hospital so instead of getting worried – Arizona then began helping her steal furiniture.

And, not to be forgotten, there was also Meredith. Meredith was caught by her sister in lie and chose to throw her sole focus into Curtis’s in order to avoid any/all conversation with Maggie. So Maggie provoked her.

Maggie needed to know if she had covered for woman that was having an affair and so Meredith what had happened. It seems that Meredith was supposed to go to D.C. (that part she hadn’t lied about) but she told Maggie that she just couldn’t go. She said she froze and after the flight left without her – she chose to stay at a hotel than tell anyone she couldn’t go through with seeing her husband.

To Alex, however, she confessed she loved staying at the hotel by herself. She told him that if she had gone then she would have ended up in a fight with her husband. So, right now, Meredith doesn’t think her marriage is going to make it.

That’s not what she wants but it is what it’s starting to feel like!