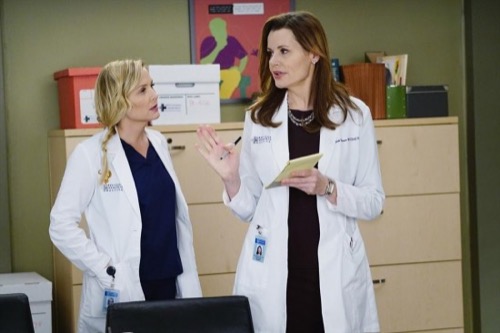 Tonight on ABC Grey’s Anatomy returns with a great all new Thursday February 26, season 11 episode 13 titled “Staring at the End,” and we have your weekly recap below. On tonight’s episode, Amelia spotlights Dr. Herman’s upcoming surgery, which intrigues the staff.

On the last episode, Meredith evaded Maggie’s questions about Washington, D.C. Elsewhere, Ben’s brother was admitted to the hospital, which caused Ben and Bailey to worry; and Dr. Herman began to see Arizona in a positive light. Did you watch the last episode? If you missed it, we have a full and detailed recap right here for you.

On tonight’s episode as per the ABC synopsis, “Amelia spotlights Dr. Herman’s upcoming surgery, which intrigues the staff. Meanwhile, Arizona and Dr. Herman grow closer as they work on completing other cases, and Bailey puts the case of a special pregnant woman on their radar.”

This episode looks like it is going to be a great episode and you won’t want to miss it, so be sure to tune in for our live coverage of ABC’s “Grey’s Anatomy” Season 11 episode 13 at 9 PM EST!

Amelia is nervous and surprisingly the surgery, that could either make or break her career, is not what has her so on edge. Actually, it’s that kiss shad had planted on Owen some weeks ago that is coming back to play havoc on her emotions. And furthermore it’s the uncertainty of where she now stands with Owen that is making her time at the hospital border on the uncomfortable.

However, the tumor and the surgery Amelia has to do in order to remove it is oddly enough the easier part of her job. After all she knows all the risks involved and she already know which strategy she’s going to use. So the lead up, at least in the beginning, wasn’t what was troubling her.

Especially as Herman had come to terms with possibly dying early on.

Yet, while Amelia was teaching the residents about Herman’s tumor and the complications that came with its removal, her patient was busy looking after her own patients. And with teaching Arizona. But then, seemingly out of nowhere, Herman’s choices (to be brave about her death and spend the remaining time focusing on her patients) started to affect Amelia.

Particularly as Herman was missing mandatory radiation in order to perform more surgeries. So at first Amelia thought she could just argue with Herman until eventually the other woman relented. But instead of making time for her own recovery, Herman and her team simply wanted to dedicate as much time as they could to treating her patients.

And in this Bailey wasn’t helping. You see Bailey had lost a patient a few months ago and now that former patient’s wife needed Dr. Herman’s help. Glenda, who is several months pregnant, had gone in for a typically scan with her OB/GYN when the doctor found a tumor on the baby’s spine. So Bailey took this woman’s case and pleaded with Herman to take it on.

She had a full case load and there wasn’t time to fit anyone else in. So she repeatedly told Bailey “no”. And then she had to tell Arizona “no” when her protégé developed a bleeding heart. Hence that should have been the end of Glenda. However one of Herman’s patients had gone into labor and while the baby didn’t survive – Herman told Arizona that they could now take on Bailey’s case.

Though, even that case ended up causing unnecessary stress when Glenda began fighting Herman on her decisions.

Herman had studied the young woman’s charts and she saw the baby’s health condition was affecting its mother’s. So she advised a C-section and at 24 weeks Glenda didn’t want to take that chance. She believed if she held onto her baby just a little bit longer then the risk to herself would be worth it and because there was nothing Herman could say to convince her otherwise – Herman was forced to bow down to her patient’s wishes.

And so Arizona found something to smile about in all of this. Because what Glenda did to Herman – Herman did to Amelia. Herman had stopped all radiation once she began to lose her hair and feel out of it. As she later told Amelia, she didn’t want to spend the last couple of months of her life feeling like crap. So she stopped the treatment that Amelia had so carefully worked out beforehand (for a reason by the way) and that pushed Amelia into trying to find a new method to treat this tumor.

Thus, Amelia had to quickly map out a new plan and unfortunately she had ran out of time to fine tune it. Because just as she finished figuring out she wanted to do – and stopped comparing or allow others to compare her with her brother – Herman came to her complaining of symptoms.

There was a course set in place for when Herman developed symptoms and that was to have the surgery right away. But Glenda and he baby had gone into distress and Arizona didn’t know if she was ready to handle surgery all on her own. Yet, when she saw he results of Herman’s latest scans – she knew she couldn’t rely on her mentor. And that it might be too late to ever tell Herman “thank you”.

Herman, though, understood that when Arizona came to help her dress that it was their way of saying “good luck and hopefully not goodbye”. So as Arizona went to go prep for surgery – one of her closest friends could possibly die on the operating table.

And Amelia has to figure out how to keep her patient even though surgery had to be pushed up a full month ahead!