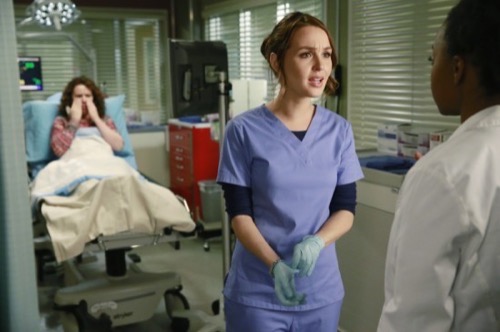 Tonight on ABC Grey’s Anatomy returns with a great all new Thursday March 26, season 11 episode 17 titled “With or Without You,” and we have your weekly recap below. On tonight’s episode, Meredith [Ellen Pompeo] is unnerved by recent events and is unsure about how to proceed with Derek. [Patrick Dempsey] Elsewhere, Owen is surprised when his mom becomes a patient at the hospital.

On the last episode, a patient’s condition sparked a conversation between Richard and Maggie about Alzheimer’s disease; April and Jackson struggled to return to their normal lives and Arizona was faced with the reality that Callie was moving on. Meanwhile, Meredith revealed her biggest fears about Derek. Did you watch the last episode? If you missed it, we have a full and detailed recap right here for you.

On tonight’s episode as per the ABC synopsis, “a patient’s condition sparks a conversation between Richard and Maggie about Alzheimer’s disease; April and Jackson struggle to return to their normal lives and Arizona is faced with the reality that Callie is moving on. Meanwhile, Meredith reveals her biggest fears about Derek.”

This episode looks like it is going to be a great episode and you won’t want to miss it, so be sure to tune in for our live coverage of ABC’s “Grey’s Anatomy” Season 11 episode 17 at 9 PM EST!

Derek is back on tonight’s brand new episode of “Grey’s Anatomy” and apparently he came ready to make all sorts of excuses.

According to Derek, he was already heading home when his wife Meredith called his cell phone. And the reason a woman answered it is because he had left his phone at the office by accident. So it was one of Derek’s interns that had inadvertently answered the phone, believing it was Derek, but then later contacted Derek to tell him his wife tried to call.

Yet, despite Derek’s best efforts, certain things weren’t adding up and Meredith knew she couldn’t really trust him. While his story was plausible, there was a still that odd moment when the “intern” refused to identify herself over the phone. And Derek showing up at that exact moment can’t be a mere coincidence

Honestly, his sudden arrival actually makes him look guilty. As if he had to rush back home to apologize to his wife.

So, right now, Meredith is being difficult. And if not with her husband then it’s with her friends. Because, later at the hospital, she eventually overstepped during a routine consul with Alex and his patient. And now everyone at the hospital knows something must be wrong with her marriage.

You see Meredith was subtle. She didn’t explode at the first chance she could and she even refused to discuss her husband or the woman that answered his phone with her friends. But Owen on the other hand completely lost it right there in the hospital when his mother came in, after an ugly accident by the way, and had a younger boyfriend by her side.

Meanwhile, an unusual case came into the hospital and it’s so good that Jo is doing truly her best to keep it away from Stephanie. Because if her friend found out that there appears to be a critter living in a woman’s sinuses then she would try to steal such a case away from Jo.

However her patient proved to be difficult. Andrea was all up for removing the thing living in her face but when Jo came close to actually removing it – she slapped Jo. Admittedly it was reflex yet it was an unexplainable one coming from a patient that needed help.

So Jo called in April and April talked their patient into allowing them to help her. And afterwards, Jo got to keep the leech as a present.

And as for Owen, he realized his mom’s boyfriend might not be so bad.

After he talked to his mom and even convinced her to end her relationship – she had a relapse in her recovery. It seems her doctors had overlooked bleeding near her spine and that caused her to seize when everyone was least expecting it. So Owen was torn up and was out in the waiting room like most people awaiting news on loved ones and surprisingly he was joined by John. Now John could have left. Evelyn had already broken up with him by that point but he decided to hear how her surgery went.

So Owen and John were able to lean on each as they waited to hear about the outcome of Evelyn’s surgery.

Speaking of surgeries, though, Meredith’s lucky streak has ended. She finally lost a patient after months of doing just fine without her husband. And now she has to face her husband.

For Derek did kind of do something wrong. The intern kissed him and he pushed her away and told her he was married. So he didn’t instigate and he shut down any inappropriate behavior but all of this is not what he says to Meredith. All he does say, after a horrible day for her, is that he wants to come home. D.C was a mistake for him!

And in the end, Owen gave his mother and John his blessing.