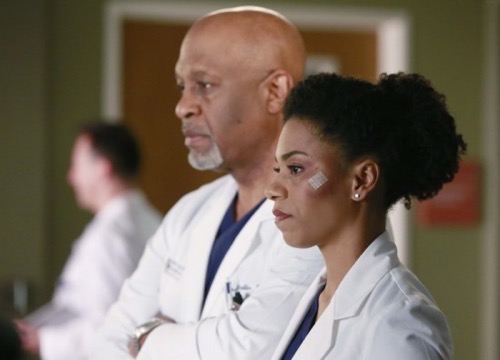 Tonight on ABC Grey’s Anatomy returns with a great all new Thursday March 19, season 11 episode 16 titled “Don’t Dream It’s Over,” and we have your weekly recap below. On tonight’s episode, April [Sarah Drew] and Jackson [Jesse Williams] find it hard to return to normalcy. Meanwhile, Arizona [Jessica Capshaw] realizes that Callie [Sara Ramirez] has moved on; a patient with Alzheimer’s disease triggers memories for Richard [James Pickens Jr.] and leads him to converse with Maggie; [Kelly McCreary] and Meredith [Ellen Pompeo] shares her fears about Derek. [Patrick Dempsey]

On the last episode, an earthquake shook the ground at Grey Sloan Memorial Hospital, trapping Maggie in an elevator and threatening Meredith’s long streak of successful surgeries. Meanwhile, Owen gave medical advice to a child over the phone and Ben confided in Jackson Did you watch the last episode? If you missed it, we have a full and detailed recap right here for you.

On tonight’s episode as per the ABC synopsis, “A patient’s condition sparks a conversation between Richard and Maggie about Alzheimer’s disease; April and Jackson struggle to return to their normal lives and Arizona is faced with the reality that Callie is moving on. Meanwhile, Meredith reveals her biggest fears about Derek.”

This episode looks like it is going to be a great episode and you won’t want to miss it, so be sure to tune in for our live coverage of ABC’s “Grey’s Anatomy” Season 11 episode 16 at 9 PM EST!

The “streak”, as its being called, might come to an end on tonight’s all new episode of “Grey’s Anatomy” and if it does then it would have been all Derek’s fault. Last week was left on a cliffhanger when Meredith called her husband’s cell phone and a mystery woman answered it for him. That was odd at the time, but it could have easily been explained if the woman at least identified herself to Derek’s wife when she asked the all-important question of “who is this?”. However this woman did not tell Meredith her name and chose to instead to hang up on Meredith.

So Meredith did what any other nervous wife would have done in her place – she tried calling Derek’s cell again and again and it went straight to voicemail. As if someone on the other end was purposely ignoring her calls. Or more importantly ignoring her questions.

And then a new case came in. Even though she was struggling with what that phone call might mean in regards to her own marriage – Meredith had to help another married couple that were simply watching their TV one night when a car ploughed through their living room. So she and Callie began working on the husband with the broken pelvis and Arizona began working on the pregnant wife. Yet there is one problem with this arrangement.

Technically, because the two cases are related, Callie and Arizona unfortunately had to deal with each other and the timing couldn’t have been worse what with their own emotions running high.

You see Callie went on a date with a woman she met online and although the date had to be interrupted midway because of the medical emergency – the woman decided to be romantic and walk Callie to the hospital. And there, they shared quite a long and steamy goodnight kiss that was, regrettably, witnessed by Callie’s ex Arizona. So now it’s awkward between them.

They didn’t know what to say and the first words they spoke afterwards probably would have been uncomfortable anyways. But then Arizona lost her patient. And the stress and general anxiety of performing a C-section on a dead woman, just to keep her baby alive, kind of dismissed everything else.

As for the man that drove through the couple’s home, it seems he was diagnosed with Alzheimer’s disease five years ago and this scenario came about when he had snuck out of the house while his wife/caregiver was in the shower. Normally, you see, she hides the car keys whenever she knows she has to step out of the room, but this time she forgot and secretly Maggie was blaming this entire incident on her. Because according to Maggie, the wife should have known better.

Maggie, it revealed, doesn’t really have a lot sympathy for people that choose to look after their loved ones with Alzheimer’s. She says that although it’s hard – they knew what they were getting into. So Richard told her about his wife. And later he asked Meredith if she was going to tell Maggie about their mother Ellis.

And she didn’t think telling Maggie was a good idea. Apparently, once she found out about it, she tried to ignore what it could mean for her. So why should she pass that off to Maggie?

The man that started it all, though, was proven to not have Alzheimer’s. According to Amelia, he had swelling on the brain that giving off the impression of the disease but was in fact treatable. So Amelia told her patient they could fix him and yet he turned down her offer to help.

He said he didn’t want to remember that he killed a woman and nearly orphaned a baby.

The husband was still in critical condition but Meredith’s streak survived once more in spite of her marriage possibly imploding. And the residents were happy about it. It seems they needed to believe in a miracle and that’s what Meredith was becoming for them.

But Arizona and Callie did talk and Arizona warned Callie her date was a crazy ex of her own that mentioned early on the in their relationship.

And Maggie found out Ellis had the disease and was actually happy that her predisposition to it, that she had found out about during an exam, hadn’t come from Richard.

So Meredith then had to have a talk with her husband. And not over the phone but face to face with the same one that just suddenly appeared on her doorstep ready to talk about the woman that answered his phone.

And the only good news is that April and Jackson’s relationship appeared to be finally healing from their ordeal!