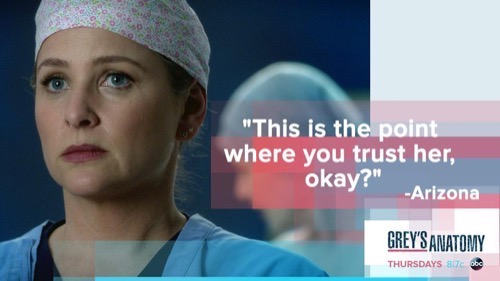 Tonight on ABC Grey’s Anatomy returns with a great all new Thursday March 5, season 11 episode 14 titled “The Distance,” and we have your weekly recap below. On tonight’s episode, Amelia [Caterina Scorsone] spotlights Dr. Herman’s  [Geena Davis] upcoming surgery, which intrigues the staff.

On the last episode, Amelia spotlighted Dr. Herman’s upcoming surgery, which intrigued the staff. Meanwhile, Arizona and Dr. Herman grew closer as they worked on completing other cases, and Bailey put the case of a special pregnant woman on their radar. Did you watch the last episode? If you missed it, we have a full and detailed recap right here for you.

On tonight’s episode as per the ABC synopsis, “Amelia operates on Dr. Herman as Stephanie assists her and a crowd of doctors observe, but the surgery proves to be more challenging than she expected. Meanwhile, Bailey is leery about Arizona tackling one of Dr. Herman’s cases.”

This episode looks like it is going to be a great episode and you won’t want to miss it, so be sure to tune in for our live coverage of ABC’s “Grey’s Anatomy” Season 11 episode 14 at 9 PM EST!

Amelia is handling the biggest case of her career on tonight’s new episode of “Grey’s Anatomy” and everything could go wrong with just one misstep. And unfortunately there have been several. For instance Dr. Herman hasn’t kept up to date with her radiation and the surgery itself had to be pushed up a full month ahead. So the tumor hasn’t shrunken to the levels Amelia was hoping and she hasn’t had that much time to prepare as she thought she would.

So from the very beginning, the surgery began with a stressed doctor. And her patient/ colleague that’s lying on her operating table – can’t afford to have her make a mistake.

Arizona was Herman’s protégé yet when she had to do fetal surgery on her own – that’s what chose over watching Herman’s surgery. And it wasn’t a cold-heated decision. It was just Arizona doing what Herman taught her to do.

However Bailey, after coming to them for help, wasn’t as sure of Arizona as she was of Herman. So she tried to interfere and even called Alex in to overrule a fetal surgeon during an actual fetal surgery. And though Arizona could have given up – she instead chose to tell Bailey to shut-up. She said she knew what she was doing and the patient didn’t have time for Bailey’s theatrics.

And in that moment, Alex told Bailey that Arizona was even started t sound like Herman.

Which, in all honesty, might be something the hospital is going to need in the future. The real Dr. Herman’s surgery hit a wall less than an hour in. Amelia had apparently felt stuck and she whispered to Richard in an aside that she needed her brother to get on the first flight out.

Richard, on the hand, refused to pander to her doubts. He assured her that she knew what she was doing and that she didn’t need her big brother to come bail her out. So once he finished propping her up, Amelia was able to return to surgery.

And she managed to finish getting around the optic nerve before she lost number two in the operating room. Stephanie, who had wanted to stay on helping Amelia through the nearly day long surgery, had passed out in the middle of it. So she then had to ask Richard to step in as the resident’s alternate, but he suggested she take Meredith.

Meredith once was a Neurosurgeon resident and so she had firsthand knowledge of what it was like to work with a Shephard. And as it turns out Meredith was really good at talking Amelia through the tough stages. She has calming effect.

But at a critical stage, Amelia was told she had to move quicker else she risked exposing her entire operating room to high levels of radiation. So she the only thing she could – she took off her specialized gloves that protected her from getting sick – and performed the rest of the surgery in regular gloves that allowed her to complete everything faster. And afterwards she had the newly returned Stephanie close up for her.

The surgery had been completed and from all reports it should have been a success. Yet Herman didn’t wake up. At least not at first because it seemed that she had a minor stroke that no one was aware of until the recovery stage.

Luckily, Herman did wake up eventually although she no longer had her vision anymore. So, rather than cry, she told Arizona that for now it’s ok.

Her loss of vision will probably hit her later but when she woke up – Herman was just happy to be alive. And funnily enough her doctors ended up taking their partial success harder than their patient. Stephanie, for one, wanted to know how they could have gotten so close only for Herman to still lose her vision in the end. But Amelia had to tell her to suck it up. She said that sometimes they weren’t always going to win. Yet that doesn’t mean they merely give up.
Kristine Francis