Grey’s Anatomy Recap – Derek Returns To Work: Season 11 Episode 18 “When I Grow Up” 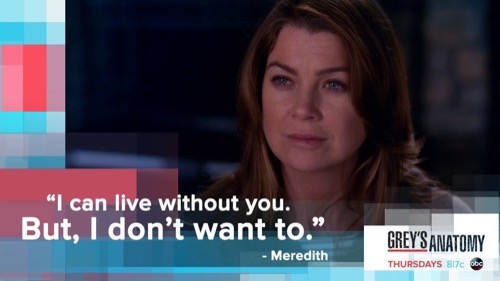 Tonight on ABC Grey’s Anatomy returns with a great all new Thursday April 2, season 11 episode 18 titled “When I Grow Up,” and we have your weekly recap below. On tonight’s episode, a group of children visit the hospital on a field trip and observe two injured cops rushed into the emergency room. Meanwhile, Stephanie [Jerrika Hinton] develops a crush on one of the chaperones; and Amelia’s [Caterina Scorsone] forced confront her feelings about Owen.

On the last episode, a patient’s condition sparked a conversation between Richard and Maggie about Alzheimer’s disease; April and Jackson struggled to return to their normal lives and Arizona was faced with the reality that Callie was moving on. Meanwhile, Meredith revealed her biggest fears about Derek. Did you watch the last episode? If you missed it, we have a full and detailed recap right here for you.

On tonight’s episode as per the ABC synopsis, “A school field trip to the hospital takes a dramatic turn when the kids witness two injured cops enter the emergency room. Meanwhile, Stephanie sets her eyes on one of the chaperones, Callie operates on the leg of the police captain and Amelia must face her feelings for Owen.”

This episode looks like it is going to be a great episode and you won’t want to miss it, so be sure to tune in for our live coverage of ABC’s “Grey’s Anatomy” Season 11 episode 18 at 9 PM EST!

Tonight’s episode of Grey’s Anatomy kicks off with Meredith and Maggie chatting in the hospital before they start their shifts. Meredith brags to her half-sister about how perfect her life is right now, she gushes that she spent the morning at her perfect house with her perfect children and her perfect husband.

There is a group of 5th graders at the hospital for a field trip – Dr. Webber kicks off the tour in front of the hospital and gives them a speech. Dr. Webber takes the kids inside and introduces them to Amelia, she tells them about operating on brains. Derek interrupts and tells Amelia that he is back – and she is going to be his boss. She groans that it isn’t going to work out between them and they can’t work together. Besides she doesn’t have any work for him, all she is doing today is clipping an aneurism.

In the lobby Stephanie runs in to the 5th grade class’s teacher, he lost his kids. She introduces herself and say that Dr. Webber took them to the emergency room – she volunteers to take him to the emergency room. In the ER the kids are getting a tour and a police car flies up to the front door. One of the officers carries in another cop – he is bleeding out of his neck, they rush him on to a gurney while the kids watch in horror, obviously traumatized.

Everyone in the hospital rushes to the emergency room – there was a bank robbery and it was a blood bath, there are more patients coming in. Dr. Webber tells Stephanie to take the kids upstairs to look at the babies and rushes to help the other doctors in the ER.

Dr. Webber gets to work on the cop named Pete, he was shot twice in the chest and has internal bleeding. The cop that carried him in has blood running down his legs, they realize he was shot in the leg. On the other table there is another cop named Brett who was shot in the neck. Owen meets a woman in the waiting room, she says that her sons are both in the waiting room – Brett and Pete are apparently brothers. Owen heads back in the ER and tells Meredith that the two cops are brothers, and he doesn’t want their mother to lose two sons in one day. Dr. Torres is working on Dan, the officer that was shot in the leg. She cant believe that he carried two cops in with a bullet in his leg and exposed bones.

Peter’s mom comes in to the ER to see him, while she is talking to him, he begins flat-lining and they rush him away. Derek tries to report to work in the ER but Amelia stops him. She tells her brother that they don’t need his help and send him to go clip the aneurism that she had scheduled, and she warns him not to complain about getting a boring aneurism instead of exciting gunshot victims. In the ER Maggie and Dr. Webber manage to revive Pete and get a heartbeat. Amelia comes in and checks on Pete and tells them that they were too late, he was gone for too long – he is going to be brain dead.

Dan sees one of the bank robbers wheeled in on guerney – he wants to know if he is going to live. Dr. Torres goes to check on the bank robber – she learns that he is just a kid, and can’t be more than 15 years old. He was shot in the back, they are trying to remove the bullet without nicking his spine. Meanwhile in the other operating room, Brett flatlines while Meredith is working on him – he suffered a stroke while in surgery and they couldn’t save him. Meredith has to go break the news to Mrs. Gibson that one of her son is brain dead and the other is dead.

In the operating room Bailey learns that the 15 year old boy is in foster care and he has no family – he needs a liver within the next few hours if he is going to survive. Bailey checks Brett’s blood type and learns that he is positive match – she asks Meredith to talk to Brett’s mom and see if she will donate his organs to the kid. Meredith snaps that she can’t ask Mrs. Gibson for her son’s liver to save the kid that killed him. Outside they are loading up the kids on the bus, they realize one of the students – Julie, is missing.

Meredith sits down with Mrs. Gibson and she agrees to donate her son’s organs. Bailey explains that it is for the kid that was robbing the bank. The cop’s mom changes her mind and says there is no way she is saving the kid that murdered her sons. She tells Bailey to go to hell. Meredith storms out of the room, she is furious. Bailey chases after her and explains that she had to try for her patient, it was the ethical thing to do. Meredith points out that she just screwed over dozens of other transplant patients on waiting lists over her one patient.

The police are notified over the missing student – Edwards begins scouring the hospital floors for the girl. She confesses to Jo that she has a crush on the teacher and she could see herself dating him. Meredith and Torres sit down with Dan and explain to him that the kid that shot his partners wont live because he needs a liver. Dan is devastated, he admits that he knew the kid Jared and he and Brett had been trying to help him turn his life around. He knew that Brett would have wanted to help him – Dan sits down with Mrs. Gibson and talks her in to giving Brett’s liver to Jared and saving his life. Bailey heads to the operating room to do the transplant.

Derek finds Julie upstairs in the box watching Bailey and Meredith perform the transplant. Julie explains that she saw Brett when he was bleeding, Derek tells her that he didn’t make it but they are using his organs to save Jared’s life. In the waiting room Bailey prints out a list of 100 people who will be receiving organs from Brett and Pete – she gives them to their mother and tells her that her sons saved all of those people’s lives. It’s time for Dan to be released, Torres walks him out of the hospital. He admits to her that he really wants to ask her to go out to dinner with him – she doesn’t say yes or no, but she tells him to come back to the hospital in ten days for a follow-up.

Once Julie is reunited with her teacher Nick, they prepare to leave. Stephanie chases after him and asks him out – he is shocked and agrees to go out with her. She makes plans for Friday, then he says that he can’t go out with her because he has prom. Stephanie is horrified when she learns that he is only 17 years old, and is actually just a volunteer teacher helper. Stephanie and Jo head out for drinks after work, and Stephanie pounds shots while she moans about her disastrous dating life.

Before he heads home Derek stops and checks on Amelia, he wants to make sure that she is okay after having to declare two men dead in one day. Amelia is fine, and she reassures her big brother that she is happy for him, and that he is turning around and returning back to work and being a better person.