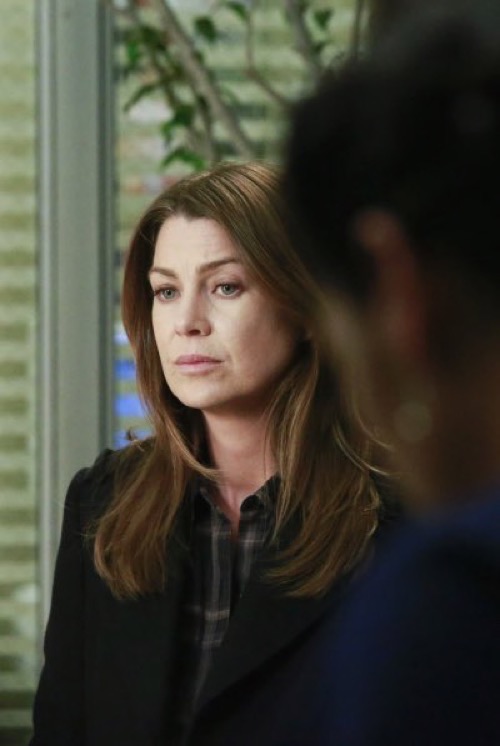 Tonight on ABC Grey’s Anatomy returns with a great all new Thursday April 30, season 11 episode 22 titled “She’s Leaving Home,” and we have your weekly recap below. On tonight’s episode, April [Sarah Drew] makes a surprising decision, and it leaves Jackson [Jesse Williams] baffled. Meanwhile, Baily [Chandra Wilson] and Ben [Jason George] disagree about their future; Callie’s [Sara Ramirez] police-officer patient makes a return visit; and Amelia wrestles with things from her past.

On the last episode, Derek witnessed a horrible car accident and springs into action to save lives. Did you watch the last episode? If you missed it, we have a full and detailed recap right here for you.

On tonight’s episode as per the ABC synopsis, “we see how Meredith and the doctors cope after they learn the news of Derek’s death. Meanwhile, April makes a shocking decision that Jackson cannot understand, and Bailey and Ben argue over their future.”

This episode looks like it is going to be a great episode and you won’t want to miss it, so be sure to tune in for our live coverage of ABC’s “Grey’s Anatomy” Season 11 episode 22 at 8 PM EST!

McDreamy is gone and now we all have to adjust. Yes, adjust because though it may seem easier to blame someone else – don’t count on some petition changing anyone’s mind. And more importantly give Meredith a break.

Apparently some called her actions cold last week. Though what they forget is that at the time, when Meredith made the decision to take her husband off of life support; she did so in the knowledge that her husband couldn’t be saved. And in all honesty he couldn’t be. Remember, he was losing all function and his organs had already begun to deteriorate before Meredith had even showed up at the hospital.

So, despite not everyone agreeing with it, she chose to save as many of his organs as possible in order for him to hopefully help someone else.

But she wasn’t callous and it’s not like Meredith walked away from that decision easily. She later ended up regretting the part she played in letting go and not long after the funeral had been wrapped up – she pulled a move similar to her mother’s .

As in she ran away with her children in the middle of the night without telling a soul.

Meredith just upped and left. She took the kids and basically abandoned the hospital. So her friends and, mind you, fellow board members had to come to a decision of their own. And they chose not to file a missing person report thus allowing Meredith to come back on her own time. That is if she ever comes back.

However the hospital isn’t running smoothly. For one, Derek’s loss was felt by everyone. And that includes Amelia who’s pretending her brother’s death didn’t really matter.

So things at the hospital and some of the doctors’ personal lives isn’t doing so well either. Bailey and Ben are actually fighting about what to do if something ever happened to one of them. For instance, if they were in Derek’s position then Ben wants his wife to take extraordinary measures and Bailey wants her husband to pull the plug as fast as possible.

In other people’s homes, you can have a difference of opinion but with Bailey and Ben it’s more like my way and no other way.

And in the meantime, Maggie feels abandoned. After all she was only recently getting to know this half-sister of hers and then said sister did a runner. But see that’s not really the part that hurts. What hurts is that Meredith completely shut everyone out afterwards and Maggie doesn’t even know if she’s safe or getting better.

So Meredith hurt her and everyone she left behind. And once Meredith was gone, April then wanted her own time to be away.

April had apparently been offered a once in a lifetime opportunity to learn new surgical procedures by doing an actual tour of duty. So somehow she convinced her husband to supporting her in this. And at first, Jackson didn’t want to. He said it would feel like he was losing his wife for three months. But he soon came around when April promised she would do everything she could to see and speak to him.

Sadly, that latter part ended up being a promise she couldn’t keep. And a “few” months turned into something more which led to Jackson being the one that was ignoring her calls.

Kind of harsh but truthfully it was like what Meredith had been doing when she’s chosen to ignore calls. Because, and this is what we’ve should have seen coming, Alex didn’t give up like everyone else did after a time. He just kept calling her for months and months. Until eventually she called him and assured him that she and kids were fine.

But then she asked him, her longtime friend and the person who became her “person” when Cristina left, to stop calling her. As if his constant concern had been a nuisance. And it’s not. Not when you think like a normal person at least.

Meredith had disappeared in the Spring and except for the one call at Thanksgiving, yeah a holiday, no one had heard from her. Thus no one knew that Meredith was pregnant. And that was the real reason she simply had to get away.

It seems that before he died, Derek had asked Meredith if they could try for another baby. And, well, she must have agreed because she was coming towards the end of her term when she rang in the New Years. So while it was understandable that Meredith felt like she should be alone with her children during her pregnancy, what she failed to grasp is that other people were/are grieving just as much as they are. And Amelia could definitely use some good news.

Who knows maybe she would have liked to know that she didn’t completely lose her brother.

Lately, the doctor has been struggling to keep up with her façade. And seeing her niece and nephew or hearing about this new baby could have ultimately helped her grieve. Something she refused to do because when Meredith was preparing to have her baby – Amelia was still making awkward jokes about her dead brother in order to mask her pain.

And do you know who did break down first about Derek?

With a long and stressful year, it was bound to happen to someone but Arizona and then Callie? Those two losing it came as a surprise.

Callie was helping one of her patients learn to walk and then all of sudden she remembered who helped her building the special censors. So she broke down and just cried. Right there in front of the patient.

And as for Arizona, she overheard another doctor complaining about how she needed a new neurosurgeon that was up to Derek’s standards. And then she mentioned how the board has inconvenienced her by not hiring someone else. So Arizona was in the right to lay into her.

But Amelia, she didn’t break until Richard confronted her. He asked her why he hadn’t seen her at their meetings and she sort of unleashed all of the anger she had pent up. So right there in full view of everyone, she yelled that she didn’t have time for that nonsense when she was saving lives like doctors should.

Richard, though, didn’t need an explanation. He simply understood. From someone who lost his own fair share of loved one, he knew she wasn’t actually angry at him but at the situation she found herself in. And after he saw her display, Owen forced Amelia to talk.

And as it turns out she had been carrying a bag of drugs with her.

So, holding a one man intervention, Owen told her that not everyone leaves. Sure she’s lost every man she’s ever loved so far but he claimed she still had a chance at happiness. And he said this as he wore his military fatigues for his upcoming tour.

Meaning if Amelia wanted to heal – she had to finally learn to do it on her own. Although, Meredith and the kids did eventually return to the fold.

She had her baby, a second daughter, and everything turned out to be fine despite the initial complications during her labor. So Alex, who was still her emergency contact, came and brought her home. And Meredith’s daughter was a great comfort to her (clean) Aunt Amelia.

After that, Meredith returned to the hospital. Where she was met by April and Owen who had both returned from overseas. And by Richard who had finally gotten engaged to a no longer reluctant Catherine.

So, for now, things are beginning to settle but there will come a time when Amelia will ask her former sister-in-law some very tough questions!