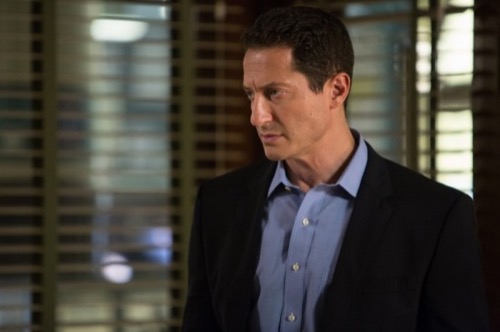 Grimm returns to NBC tonight with a brand new Friday January 23, season 4 episode 10 called “Tribunal” and we have your weekly recap below. On tonight’s episode, Nick [David Giuntoli] gathers the whole team, including Wu, to track down Monroe [Silas Weir Mitchell] and return him to Rosalee [Bree Turner]. Meanwhile, Monroe’s life hangs in the balance after his abduction by the Wesenrein; and Juliette discovers more about her new reality as a Hexenbiest.

On the last episode, the Wesenrein acted on their many threats against Monroe (Silas Weir Mitchell) and Rosalee’s (Bree Turner) marriage. Meanwhile, Nick (David Giuntoli) and Hank (Russell Hornsby) brought Wu (Reggie Lee) to a place where he’s sure to find the answers he was looking for. Elsewhere, Juliette (Bitsie Tulloch) tries to come to grips with her new reality. Did you watch the last episode? If you missed it, we have a full and detailed recap right here for you.

On tonight’s episode as per the NBC synopsis, “After Monroe’s (Silas Weir Mitchell) abduction by the Wesenrein, Nick (David Giuntoli) gathers the whole team, including Wu (Reggie Lee), to track him down and return him to Rosalee (Bree Turner). As the search intensifies, Juliette (Bitsie Tulloch) learns more about her new reality as a Hexenbiest. Russell Hornsby and Sasha Roiz also star.”

Don’t forget to come back here tonight at 9 PM EST for our recap. In the meantime, hit up the comments section below and let us know what you’re most looking forward to in tonight’s Winter Premiere, season 4 episode 10.

The wesenrein chant goes on and Monroe is held in place before the evil tribunal. He’s knocked to his knees. Hank and Nick tell Renard they’re sure Riker is the grandmaster and that Acker is working with the wesenrein. Renard says they have to make sure Wu is ready to handle a woge. Renard says to bring in Acker. Juliette and Rosalee are working on Truble’s notes and agree to compare it to the wedding guest list. J offers to call Monroe’s parents but Rosalee says not yet.

Out in the woods, they uncover a skull and recite in an ancient language. They stir blood and sling it on Monroe’s face. They say in accordance with ancient laws, he must be atoned with blood. He talks back and is hit again. The grandmaster stands and says – let the tribunal begin. Riker reads the charges. They lift Monroe and remove his shackles. He is told to walk forward. He is charged with marrying outside his bloodline and befriending a Grimm.

Hank brings Wu into a room and he tells Wu that he was where he was once. Wu asks why Nick didn’t tell him and he says he thought he would think he was crazy. Hank says you have to be ready and have to be in the right state of mind. He says it’s different when it’s right in your face. He says you have to accept that it’s the new normal. Rosalee says she can’t figure out the connection. Juliette says she keeps thinking about Adalind and wonders if you can become a hexienbeast.

Rosalee says the ones that are made are even more deadly. Rosalee wonder what she’s missing. Shaw somehow found out that they were married and maybe it was a plus one. Nick brings in Bud to woge for Wu. Bud asks why him and Nick says there’s nothing scary about him and Bud asks nothing at all. Bud says hi. Nick asks Bud to sit and he does. He smiles nervously. Acker makes a suspicious call. Hank asks Bud to explain it to Wu.

Bud is making a hash of things. He tells them he can’t and then he does and Wu freaks out. Nick tells him to take it easy. Bud says he prematured again. Hank asks Wu if he’s okay. Nick tells him he’s an eisbieber. Wu says that was a woge. Nick says there’s two kinds. One only he can see and one that anyone can see. Wu asks him to do it again. The grandmaster asks for evidence against Monroe. Monroe asks if the evidence is supposed to be against any reasonable doubt.

He fights back and runs for it. He’s chased and tackled and bites a kid killing him. One demands that he be killed for that too but the grandmaster says he will face that charge before the tribunal as well and to take him back. They haul him away. Nick asks Wu if he’s okay and Hank says it’s different when you face one that wants to kill you. Wu says he’s in and Bud says he’s glad he could help. Bud says call if he can help again. He takes off. Nick, Wu and Hank come back to see Renard.

They next plan to bring Acker in. Renard says for Wu to put pressure on Acker. Juliette calls Bud to come to her house. He says he’s coming now. Acker watches him leave and a truck follows him. Monroe is now muzzled. They show a wedding photo of Monroe and Rosalee and call it an abomination. They also say that a Grimm was at the wedding and they have an eye witness. Wu approaches Acker. He asks to talk to him.

Bud shows up at the house. Rosalee asks him to look at the wedding list. Wu takes Acker into a room and asks him about why he can’t properly guard a house and now someone took Monroe. He asks why he’s an idiot and what he saw that got him to walk away. He asks why he got out of his car. Acker woges and Nick comes in and gets rough with him.

He threatens to put him down if anything happens to Monroe. He walks out and then Hank threatens him too. Then Renard comes in and Acker appeals to him thinking he’s going to help and Acker asks for a lawyer. He tells them to lock him up and says no lawyer, no calls and makes a threat too.

Bud goes over the list then he walks outside when he doesn’t get an answer that he needs. A guy punches him then drives off with Bud and his truck. A man says that Monroe has disregarded law for seven years and asks how Monroe pleads. Monroe says not as guilty as them. They bring forth an eye witness. It’s Bud under a hood. They tell him to testify or die. Bud tries not to make any firm statement.

Rosalee and Juliette go to the real estate office to talk to the realtor that was a plus one at her wedding. She says her brother knows Shaw and says he’s a cop – it’s Acker. They call Nick and he tells them to stay with her. They ask Bud if he has any knowledge of Monroe helping the Grimm and he says yes and he says he’s helped the Grimm and the only regret he has is that he can’t help him now because he’d have a field day here.

The grandmaster calls out that the trial is over and to bring Monroe forward. He says to let the defendant have his say. They pull the gag out of Monroe’s mouth. Monroe says a tribal implies that you have the authority to judge. He says you don’t know the difference between right and wrong and you don’t. He says his love for his wife is right and you can’t destroy it. Nick comes and tells Acker he needs him to talk to someone and says they can watch him talk to a real estate agent.

Rosalee asks the realtor how well she knows about the wesenrein. She says her brother would never know anything about it. Nick says whatever happens to Monroe will happen to his sister. He leaves Acker with Renard and goes in with his sister. Renard asks Acker if he knows what Grimms do. Nick goes and tells the woman he’s going to take her home. Acker says he’ll kill her and Renard says – yes he will.

Monroe tells them that nothing in life is supposed to be pure and that only love is pure and he feels sorry for them. The grandmaster says they’ll vote and a removal of the mask is a sentence of guilt. One by one they remove their masks. It’s unanimous for his death. Monroe says he’ll see them all in hell. Bud tells them to stop it. Acker’s sister says she can’t believe it. Renard comes out and says they’re in Oxbow Park. They head out to try and save Monroe.

Everyone takes a gun and they toss their badges in the car – this is Grimm and Wesen business – not police business. They pile firewood around the death spike to burn Monroe’s body after the impale him. The grandmaster says to put him on the stake. He tells them to cut Bud’s throat. Nick and them are there and he says the tribunal is over. The grandmaster says you won’t be able to arrest all of us and Nick makes it clear that he’s not interested in arresting them.

One tosses his gun then woges and tries to attack Wu who cooly shoots him. One pulls it on Hank then flees. Renard woges and guts the guy. One gets Juliette on the ground and she woges and uses her power to shoot him. She grabs her gun and goes. He saves Bud then hushes him when he hears a sound. He kicks another guy’s butt and yanks off his mask. Bud says it’s his chiropractor. They don’t see chiropractor. They’re after Riken.

Monroe tackles him and says he should have killed him when he has the chance. He knocks Monroe down and says he’s going to kills him now. She says like hell and jumps on him and eats him. Monroe jumps in for a snack too. They hobble back in all bloody. Wu asks what’s in store for these idiots. Renard holds a press conference and says they arrested a cult of hatred lead by a police officer. They are all together at Monroe and Rosalee’s toasting their success. Renard and Wu are there too.

Monroe thanks them all for the save. Juliette says they deserve every happiness and they drink to their honeymoon. They leave with a police escort. Monroe says the police escort is nice as long as they’re not coming alone. Hank says you won’t even notice we’re there – we’ll blend right in. They’re joking. At the trailer, Wu is reading book after book on Wesen. He gets to a section on hexienbeast.

Renard’s doorbell rings. He goes to answer. It’s Juliette. She rushes inside. He’s surprised to see her. He asks what she wanted to talk to him about. She turns away and says she doesn’t know how to say it. He says just to tell him. She woges. He’s stunned.