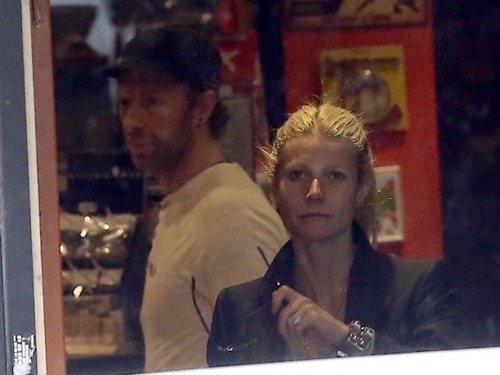 Gwyneth Paltrow and Chris Martin’s divorce may be official – but don’t expect her to be rushing down the aisle and getting married to her boyfriend Brad Falchuk any time soon. Not long after Gwyn and Chris “consciously uncoupled,” the actress was linked to Glee producer Brad Falchuk and has been dating him off and on ever since. When news of Chris and Gwyn’s divorce became official this year, everyone was certain that meant Gwyn and Brad would finally get serious – but according to a new report their relationship is actually fizzling out, and a break-up is coming.

The May 25 edition of OK! Magazine reveals that Gwyneth and Brad don’t agree on everything – and they can’t even go out to eat and enjoy a romantic date because they will spend the entire time bickering over what food they should or shouldn’t eat. Gwyn’s strict gluten-free dieting is really just the tip of the iceberg, the bottom line is – she and Brad have nothing in common.

Brad Falchuk and Gwyneth Paltrow’s constant fighting isn’t just about what they will have for dinner, it all boils down to the fact that Gwyn can apparently be overbearing (you don’t say), and Brad won’t put up with it. An inside source dished to OK! Magazine, “Brad just rolls his eyes when Gwyn rants about GMO’s. Chris Martin let her call the shots about most things, but Brad is not so easy-going.” Well, if Brad doesn’t cut Gwyn loose because he is tired of dealing with her controlling ways, Gwyn will leave him soon anyway. We all know she will never be able to stay in a lengthy relationship with someone who won’t let her boss them around.

Are you surprised that Brad Falchuk and Gwyneth Paltrow have lasted this long? Or do you think they are in it for the long haul and might actually get married, now that Gwyn is divorced? Let us know what you think in the comments below!