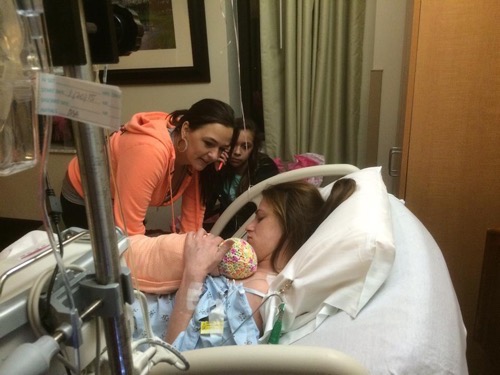 Tonight on TLC GYPSY SISTERS continues with an all new Sunday June 14, season 4 episode 3 called “Desperate Times Call for Desperate Measures” We’ve got your recap and spoilers down below! On tonight’s show a fight erupts when Kayla, Annie and Mellie confront Nettie over her trash-talking online.

On last week’s show Mellie’s beau got in a fight with the father of her second child while she was in labor. Later, the women found out who was been spreading rumors about them on a gossip site. Did you watch the last episode? If you missed it we have full and detailed recap, right here for you.

On tonight’s show per say the TLC synopsis “a fight erupts when Kayla, Annie and Mellie confront Nettie over her trash-talking online, and the situation escalates into legal action, so JoAnn asks her sister to help restore peace in the family.”

Tonight’s episode is going to be another drama packed one, which you won’t want to miss. So be sure to tune in for our live coverage of TLC′s Gypsy Sisters Season 4 episode 3 at 9PM EST! While you wait for our recap, hit the comments and let us know how excited you are about the new episode of Gypsy Sisters tonight.

#GypsySisters starts at Kayla and Mellie’s house. Kayla calls Nettie to ask her WTF is going on. Nettie answers and asks about the Gypsy Grapevine site and says there’s sh-t all over it. Nettie says she’s seen it, addressed it and knows who did it. Nettie says she didn’t make that message about her but someone else did it and she doesn’t want to be pointed at. Kayla says they know Nettie leaked all that.

Kayla goes off on her and Nettie says she doesn’t post anonymous things and says she says things to people’s faces. Nettie says Dallas made the post and Dallas says she didn’t mean to make the post but was mad. Kayla says what about the other 299. Kayla says she’s not a whore and is no longer with Richard. Then Dallas grabs the phone and calls her a whore.

Nettie says Dallas is taking out her frustration on Annie and Jay on Kayla. Kayla says she doesn’t tell Annie who to lay down with then Annie goes off and says she’s f-ing her baby daddy now. Kayla says then it turns over to Annie and Jay which the call wasn’t even about. Mellie says she’s going to rip Dallas’ head off her neck and says to bring it.

They head to see Phil Griffin, a lawyer. They want to see if they can take on Nettie legally. They tell Phil about the website asking them to take down posts but they didn’t. Kayla says they posted where they got the gossip from instead of taking it down. She says it’s her first cousin Nettie. Mellie says she called them whores that drink too much.

Mellie says they need the demons out of Nettie’s mouth. She says Nettie is jealous. Phil asks if they want all this to stop. He says he’s going to write Nettie a cease and desist letter asking her to stop spreading false rumors and says he’ll have it hand delivered the next day. He says if she continues on, then they will take additional action.

Kayla says that will stop Nettie from talking sh-t about them on the internet. Nettie tells Dallas to give her the phone but Dallas is reading her messages. Nettie says she’s so stressed out that she’s sick. JoAnn says they need to support Nettie and she can tell she’s not feeling well. Nettie says the hospital told her she was having panic attacks. JoAnn says she’s worried about Nettie’s health.

She says she’s the only one that sees the big picture and tries to fix things. She calls Dovie and says she needs help. She says Dovie is in tune with spiritual healing. Dovie is in North Caroline with her kids after a divorce. She says there’s a lot of bad stuff going on and Nettie and Kayla and Mellie are at war. Dovie says she saw some of this online and JoAnn says Nettie’s health is suffering.

She asks Dovie to come help and figure out what to do. Dovie says she’ll be there tomorrow. Mellie says it’s so peaceful living at Kayla’s and she’s happy to have her baby girl and boy both there. She says Richie was jealous of Brandy at first but now is being a good big brother. She says she’s happier than she’s been and wants to be the best mother she can be.

She says it’s them against the world. JoAnn waits for Dovie at a restaurant for high tea. JoAnn says they have six sisters in total. Dovie shows up and JoAnn is excited because Dovie hates drama like she does. Dovie says she’s excited but nervous because of all the drama. She tells Dovie that Mellie and Nettie were screaming and it’s a family war.

She says the Mellie thing is the ultimate betrayal to Nettie. She hopes Dovie can calm Nettie down. JoAnn says she can’t do it alone this time and says Dovie got through her divorce with her spiritual healing. Dovie says she used a spiritual shaman. She says it’s a guide for a family in crisis and says the other sisters are in a dark place and the shaman helps them see the light.

She says it’s a spiritual intervention. JoAnn says they have to do something to get the family back together and says she’s willing to try anything. Nettie and Dallas go to the nail salon to relax and get a pedicure. Nettie says her lupus is through the roof because of all the fighting and drama. Dallas looks online and Nettie asks if she’s looking at the gypsy website.

She says Mellie doesn’t care about her or her health and she’s causing the lupus flare up. She says they don’t give a sh-t they’re causing her flare up. A girl shows up and serves Nettie at the nail salon. She reads the cease and desist letter and Dallas says they’ve done called a lawyer out on her. Nettie reads it and says she has to stop all libelous and slanderous comments.

Nettie says f-k Kayla and Mellie and says they’re both whores. She says gypsies don’t call the law on one another. Dallas says if they want to start stuff, they can start it. Nettie and Dallas leave and Nettie says she can’t believe the letter and says the bitches need to leave her the f-k alone. She calls JoAnn to tell her about the lawyer letter. Dallas says she got served.

Kayla and Mellie go to the tattoo shop and she says she has a tattoo that needs fixed. She says she has her exes name covered up and she needs it to be gone because it’s coming through again. The artist suggest they add the words gypsy pride and she lies down to have the work done. She says never ever again. They check the work on her tramp stamp and she’s pleased with how it came out.

Dovie is making a rose petal tea. Nettie and Dallas come home and they hug hello. Nettie says she’s not in a calm mood but Dovie says she made a good meal for her lupus to warm her up. Nettie says it will take more than a bowl of soup to heal the family. Nettie tells them about how she got served at the nail salon. JoAnn asks if they’re suing and Nettie says they’re threatening to sue if she doesn’t stop.

Dovie says that’s not right what Mellie did. Nettie says it stressed her that her sister would do that to her. JoAnn says she and Dovie have a good idea to bring everyone face to face. Dovie tells them about the spiritual intervention with the shaman who takes out all the darkness from their lives. Nettie thinks it sounds like voodoo. Dovie says it can’t hurt anything.

Nettie says she doesn’t want to be in the room with them. JoAnn says she knew Nettie would think the shaman thing was weird but hopes she gets on board. Dovie says the food is gypsy soul food. Nettie tries it and says she still wants to kill them.

JoAnn and Dovie go to meet the shaman whose name is Christi. She asks how Dovie has been and she says the divorce is final and she’s got a fresh start. JoAnn tells her about Nettie and Mellie being at war and the gossip and jealousy. Christi says she doesn’t want to know too much and says she goes into a meditative space to get information from spirit guides then facilitates healing.

JoAnn says she doesn’t think drums and rattles will fix their family. She thinks it’s going to be like war when they get together and they’ll kill each other. Christi says it’s about bringing back calm energy. She says they can come to a cabin out in nature to get them all together there. JoAnn says they just need to get everyone there to try it.

Mellie, Kayla and Annie meet with JoAnn and Dovie to talk about the shaman. JoAnn tells them she called Dovie because it’s out of hand if they had to go take out a cease and desist letter. Kayla says it’s the worst thing Nettie has ever done to her. Dovie says she has a last resort and tells them about the spiritual shaman. Mellie asks if it’s like an exorcism.

Mellie asks what the hell is a shaman and says she’s never heard of it. They ask if Nettie has agreed and they tell Kayla she hasn’t said no. They agree contingent on Nettie agreeing. Then Annie say she won’t go but they tell her it’s not against their religion and she relents. Dovie takes Nettie to get acupuncture for her stress and lupus. Erika the acupuncturist asks to look at her tongue.

She says Nettie’s yin is low. She says they try to strengthen her chi and yin. She puts pins in her ears and legs. She then burns some moxa on her feet. She tells Nettie to clear her mind but she says her foot is on fire. Dovie convinces Nettie to go to the shaman event and says Mellie and Kayla better agree. Dovie calls Mellie and says she’s with Nettie and she says she’s going to the shaman.

Kayla says tonight they’ll make amends or it will destroy them once and for all. Nettie says she wants them to say what they have to say to her face. Dallas says they don’t have the balls to say it to her face. Nettie says if Mellie doesn’t show up, she will hunt that bitch down and drag her there. JoAnn says they’re so deep in the woods if someone kills each other they won’t find the bodies.

Nettie says it’s creepy out there and Kayla says she doesn’t like it. Mellie says Nettie is probably waiting to kill them. Kayla says she is in the middle of nowhere and she’s freaked out about the location. They spot Nettie’s truck and then Mellie says she’s not going into that house. Dallas says he has demons coming out of her right now. Kayla says all of them in the same room will be a disaster.