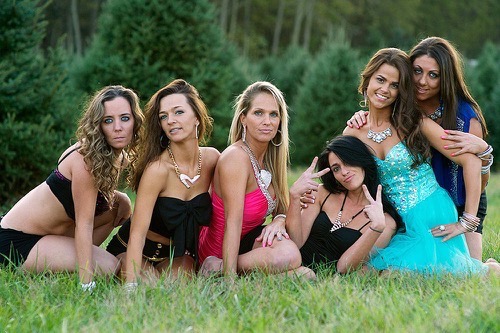 Tonight on TLC Gypsy Sisters continues with an all new Sunday June 7, season 4 episode 2 called “Dirty Little Secrets: Exposed!” We’ve got your recap down below! On tonight’s episode, Mellie Stanley’s beau gets in a fight with the father of her second child while she’s in labor.

On last week’s show in the Season 4 premiere, a pregnant Mellie moved in with Kayla and Annie, who were enjoying the single life, but Nettie and JoAnn weren’t happy with their sister’s new living arrangements.

On tonight’s show per say the TLC synopsis “Mellie’s beau gets in a fight with the father of her second child while she’s in labor. Later, the women find out who’s been spreading rumors about them on a gossip site.”

Tonight’s episode is going to be another drama packed one, which you won’t want to miss. So be sure to tune in for our live coverage of TLC′s Gypsy Sisters Season 4 episode 2 at 9PM EST! While you wait for our recap, hit the comments and let us know how excited you are about the new episode of Gypsy Sisters tonight.

Mellie went into labor in the first five minutes of tonight’s episode and while this time in their lives should have been filled with joy, the great wait finally being over; there was still some unresolved issues to deal with within the family.

Just before Mellie was taken to the hospital, Kayla and Nettie finally had that sit-down that was a long time coming. And it did not go well. Which in this case is unfortunate.

See the two women used to be close yet lately their relationship has deteriorated. And now they both have their reasons as to why. Nettie says she hates Kayla’s partying. Since Kayla split from her husband, she’s been partying nonstop and Nettie accuses of her of dragging Mellie into that mess as well. So coming from Nettie, she’s upset because she’s concern.

But Kayla, you understand, has a different story. She says it’s not her partying that’s the problem. It’s the fact that she’s grown closer Mellie in these last few months than either Nettie or JoAnn have. So Kayla can’t help think that this whole thing is a jealousy issue.

Hence, when Mellie went into Labor, Kayla decided to be the bigger person and let Mellie’s sisters take over.

Mellie was surrounded by her sisters and even had Skott the boyfriend by her side. But, sadly, things still did not go smoothly at the hospital. And with the arrival of Nik the birth father, Mellie ended up getting a lot more drama than she needed.

It seems that both Nik and Skott wanted to be in the delivery room with Mellie. Yet that was causing some tension. Nik didn’t think Skott should be there when the baby was born and Skott felt like Nik had arrived literally out of the blue. So to save herself the trouble, Mellie asked that only her two sisters to be with her instead.

That way there shouldn’t have been an issue.

Though that didn’t mean anything in the end because the two sisters that were earlier making fuss over the baby’s name were not at the hospital. And so Mellie had to turn to two of her other sisters. Meanwhile Skott felt like he needed a drive to get away from Nik.

Nik hadn’t been around in the last few months so seeing him playing with Richie felt like he was putting on a show. And Skott appeared to have gotten angry while watching them. So a time-out in the car wasn’t that bad of an idea. However getting arrested was a whole other story.

Skott got arrested in the parking and thus he wasn’t there when Mellie did give birth to her daughter.

A daughter she named after her sister Brandi by the way. In order to not offend either Nettie or Kayla. And it turned out to be a good tribute to the one sister that doesn’t hadn’t had a namesake.

So the issue surrounding the name was put to rest.

But as for Skott, he showed a couple of days after the birth with gift and an apology but now Mellie is seriously considering their relationship. And it looks like what happened at the hospital has Skott questioning their future as well.

And speaking of relationships, Annie has gotten a new boyfriend but it would have been better for the family (particularly with the way things are now) if she hadn’t decided to date Dallas’s ex-husband. Annie is Kayla’s sister, Dallas is Nettie’s daughter, and they’re all cousins. So why go there?

Dallas has recently got remarried and moved away but she still has to have contact with her ex because of their daughter. So when she found out that Annie had crossed a line – she wasn’t alone in getting angry. Nettie was just as upset.

Though in the beginning, when she first heard about Annie had done, Nettie didn’t want to cause an issue. She felt like the focus should be on Mellie and the new baby. But then Dallas came back and with the arrival of her daughter – it was like someone had lit a match.

Things were suddenly being said about Kayla and Mellie on the gypsy grapevine. And eventually someone went too far with what was supposed to be idle gossip. They called Kayla a whore and Kayla found out about it when she saw it on her daughter’s phone.

So Kayla sent in a kindly worded cease and desist and what she got in return was a long list of messages. Messages the website claims Nettie provided them with in which she calls her family members partying whores. And what that also means is that for once, Nettie is the one in trouble.

Apparently it was Nettie this whole time behind the rumors. And at no time did she appear to care about how much she was hurting the people she loved. For not only did she claim that Nik wasn’t the father of Mellie’s baby but she was fully prepared to jeopardize Kayla’s reputation when she knows the other woman is going through a divorce.

Now that is rock bottom!