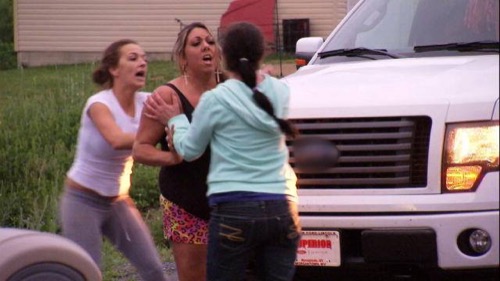 Tonight on TLC GYPSY SISTERS continues with an all new Sunday July 19, season 4 finale called “Wildest, Craziest, OMG Moments.” We’ve got your recap down below! On tonight’s show memorable moments from past seasons.

On last week’s show the women rallied around Nettie as she dealt with the loss of a loved one, and Mellie asked her to plan Brandy’s baptism. Later, the gang took a trip to Washington, D.C., to celebrate Kayla’s birthday. Did you watch the last episode? If you missed it we have full and detailed recap, right here for you.

On tonight’s show per the TLC synopsis “memorable moments from past seasons, including epic fights and ostentatious celebrations, are recalled in the Season 4 finale.”

Tonight’s episode is going to be another drama packed one, which you won’t want to miss. So be sure to tune in for our live coverage of TLC′s Gypsy Sisters Season 4 finale at 9PM EST! While you wait for our recap, hit the comments and let us know how excited you are about the new episode of Gypsy Sisters tonight.

On tonight’s Season 4 Finale of the “Gypsy Sisters”, we take a look back at some of the wildest (even in Gypsy sense) things to ever happen on the show.

And as it turns out, weddings tend to be the place where things kick off the most. Take Mellie’s wedding for instance. There were just so many things that had gone wrong or had become a bigger issue than it should have been thanks to a certain someone’s attitude that pretty much everyone knew the wedding wasn’t going to take.

In fact Kayla called it right there at the ceremony. First she said she’d give them three months and then she said three weeks as the wedding progressed. Yet, what was probably the most surprising about the whole event is that Mellie went ahead with it all in spite of the many warning signs.

She hated her dress, her wedding, and the groom didn’t seem to register with her at all. But luckily Nettie’s wedding was the exact opposite of her sister’s. For she at least was appreciative about everything that had to be done for her. So she didn’t lash out at friends and family.

And on that note that’s what led to the commentator discussing the top five fights. For although the family loves to come together for celebrations such as weddings or christenings there’s just something in their DNA that causes them to have a big bust up every couple of months. And normally these fights either involve both Nettie and Mellie or sometimes just one of them.

Thus the Top 5 fights were the Strip club intervention, the Birthday Bash, the Big Easy Brawl, The Hunt for Nuckie, and lastly The Family Fist Fight.

The strip club incident happened when Nettie tried to confront her sister about working at a strip club. And Mellie went from zero to a hundred. Mind you while she was still at work. So that time it was Mellie that overreacted.

But Nettie isn’t a saint. And there’s plenty of times when she’s been the one to take things too far. Such as the Birthday Bash, the Hunt for Nuckie, and the Family Fist Fight. The last one being the one where she had Kayla pinned to the ground and was beating the living daylights out of her.

So these gypsy ladies know how to thrown down and often that’s their first response to everything little thing that bothers them!

However they do have something working in their favor and that’s their ability to forgive. After every fight there’s an apology and generally that apology is accepted. Hence Kayla and Nettie can have a big fight every year but still be just as close as they were the second the fight is over.

And that goes for their post-physical or post-phone fight because Kayla also had issues with Mellie in the past (particularly on the phone) yet its Mellie that’s currently living with her. Or some would say off of her. So when you think about it Kayla is the one that often acts as the bigger person in most situations.

Sure, she knows how to get riled up like the rest of them but there comes a point with her where she steps back and sees what she’s doing isn’t helping anyone. And that’s why her breakup with Richard came as such a shocker. No one would have ever believed that Kayla could ask for a divorce.

Yet, ultimately, her good will had just been pushed too far.

Speaking of going too far, though, Mellie is kind of the queen of that. Whether she was arguing with a husband in a marriage that lasted only days or drinking to excess, Mellie is often the one that needs to be put in a corner in order to cool down. So you could say there’s a part for everyone in this family.

Nettie is the matriarch, Kayla is the peacekeeper, JoAnn is the voice of reason, Annie is out there, and Mellie is volatile.

And all in all it makes for good TV!