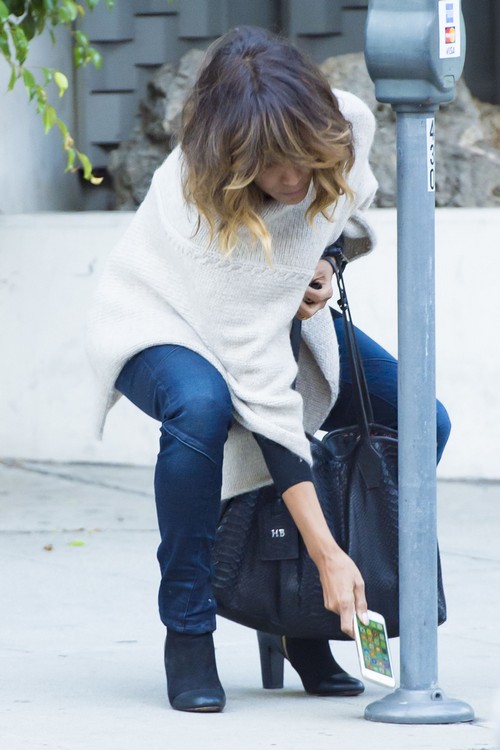 Halle Berry is preparing for a brutal custody battle. The Oscar-winning actress is absolutely petrified estranged husband Olivier Martinez will take their two-year-old son Maceo and return to France. In divorce documents Berry has asked that Martinez be barred from taking Maceo out of California without express written permission.

Martinez has hired high-powered attorney Laura Wasser and wants joint custody of Maceo in the according to divorce documents filed on his behalf. Having joint custody scares Halle because she knows Olivier wants to move back to his native France.

Berry was open to the idea during their marriage, however couldn’t do so due to the terms of the custody agreement with Gabriel Aubry – father of Berry’s seven-year-old daughter Nahla.

Baby daddy Gabriel Aubry didn’t go down without a fight – literally – when it came to custody of Nahla. Tensions boiled over on Thanksgiving Day 2012 when Olivier and Gabriel came to blows – which required medical treatment for both Halle Berry’s ex-boyfriend and then-fiancé.

Gabriel ended up with primary custody of Nahla and Halle Berry now shells out $16,000 a month in child support. More than likely Martinez will also ask for child support from Berry – and insiders tell Life & Style the French actor may seek spousal support as well.

After three failed marriages Halle Berry is ready to take a break. “[Halle] is finally realizing marriage just might not be for her,” the insider revealed. Reportedly Berry rushed to marry Martinez after she found out she was pregnant with Maceo. After the vows were said and rings exchanged Halle found herself married to a controlling and violent man with a jealous streak a mile wide.

Insiders reveal that Olivier did not want Halle to work after the couple tied the knot. Martinez was reportedly wildly jealous of every man who had contact with Halle. A source says that the couple fought every few days and Olivier wanted to dictate to Halle what she could and couldn’t do.

If Olivier Martinez attempted to assert that much control over Halle Berry when the couple was married imagine the demands the actor will make during what is gearing up to be a very nasty divorce and custody battle. Does Halle have cause to worry that Olivier will try to take their son Maceo and flee to France?

Newly divorced mom Halle Berry and her daughter are spotted leaving the dentist in Beverly Hills, California on November 6, 2015. Berry has seldom been seen since her split from hubby Olivier Martinez. FameFlynet