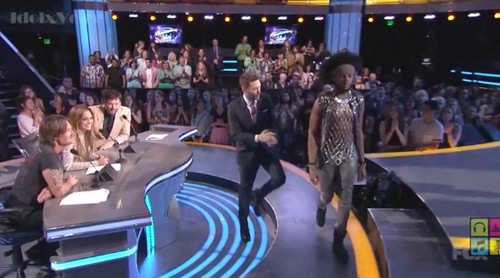 American Idol judge Harry Connick Jr. got in to an epic fight with contestant Quentin Alexander in what might go down as one of the most awkward confrontations in the history of live television. After Quentin took the stage and performed his rendition of a Lenny Kravitz hit, Harry Connick Jr. gave him a pretty tough critique. Ryan Seacrest took the stage after the Idol judges were done critiquing his performance and Quentin announced that the show “was wack!”

Ryan Seacrest, always the professional, tried to work with Quentin and got him to explain that he was upset that his friends Joey Clark and Rayvon Owen were in the bottom two and one of the were going home. As Quentin began to take his seat, Harry Connick Jr. didn’t realize they were still live and began shouting across the seas of fans that Quentin was being disrespectful.

Harry Connick Jr. shouted after Quentin, “If it is that wack, you can always go home.” Quentin changed course and began marching over to Harry, and looked like he was about to attack. Harry continued, “‘American Idol’ is paying a lot of money to give you this experience, and for you to say that to the hand that’s feeding you right now, I think it’s highly disrespectful.” Quentin continued to argue that he wasn’t saying the show was “Wack,” he thought it was wack that one of his friends were going to be eliminated. Ryan Seacrest continued to diffuse the heated situation, and Quentin half-heartedly shook Harry’s hand before finally returning to his seat.

Harry and Quentin’s fight will definitely go down in American Idol history, and judging from fan’s comments on Facebook and Twitter right now – Quentin might as well just pack his bags because it looks like any chances he did have of winning…he just blew.