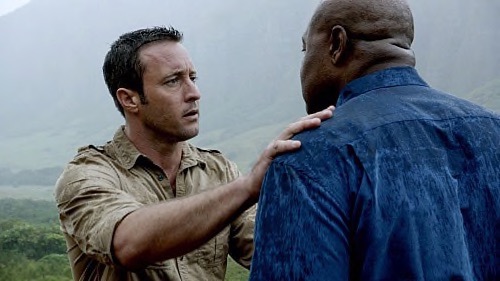 Tonight on CBS Hawaii Five-0 continues with an all new Friday April 3, season 5 episode 20 called, “Ike Hanau (Instinct)” and we have your weekly recap below. On tonight’s episode, Grover’s oldest and closest friend tells him that he witnessed his wife fall off a cliff to her death, but Grover [Chi McBride] suspects it was no accident. Meanwhile, Danny [Scott Caan] and Dr. Shaw get trapped in an elevator with a dead body that needs to be processed.

On the last episode, McGarrett and Odell came under siege in Odell’s barbershop when they try to protect a young man who was being hunted down by a gang. Also, Jerry was wrongfully accused of committing a series of home invasions. Did you watch last episode? If you missed it we have you covered, we have a full and detailed recap right here for you.

On tonight’s episode as per the CBS synopsis, “When Grover’s oldest and closest friend tells him he witnessed his wife fall off a cliff to her death, Grover’s gut instinct tells him that this was no accident. Also, Danny and Dr. Shaw get trapped in an elevator with a dead body in need of processing.”

This is definitely one series that you don’t want to miss. Don’t forget to stay tuned to Celeb Dirty Laundry where we will be live blogging every episode of Hawaii Five-0 new season. While you wait for the recap, check out a sneak peek of tonight’s episode below!

#H50 starts with Clay and Lou out to dinner with their ladies. Clay complains about all the sea food then they talk about their plans. Clay’s wife Diane talk about their plans but Lou says they should play golf while the ladies shop. Clay says he wants to spend his anniversary with his wife. Lou says they need to spend Saturday with them and they agree. Next day, Renee laughs at his hangover. He gets a call from Clay who says he needs help – he sounds in a panic.

Clay says Diane fell and he thinks she’s dead. He’s trying to revive her as he talks to Lou. He heads to the mountain range and the cops tell him that she was DOA and it looks like she fell from way up. Clay is still with his wife’s body and is holding her hand. He’s clearly distraught and says he can’t let them put her in a bag. Lou says he has to let them but says they can ride with Diane’s body. Danny is at another crime scene – dead guy is Glen Hurd.

Danny asks Shaw where the other CSUs are and she says they’re with Max at the mountain. She says single shot to the chest and TOD about 1 am. He asks if she needs help moving the body and he says he’ll help. They load the corpse onto the elevator and head down. Shaw says she owes Danny for suggesting she try surfing. She says it’s been good for her. The elevator slams to a stop. Shaw has no signal. They bang on the doors.

Clay tells Lou this was his fault. He says he was walking in front of her and heard her yell then he turned and she was gone. Lou tells him it was a horrible accident. Clay says she was his life. Renee shows up and hugs him. Lou goes up to the top of the cliff where she feel from and Steve meets him there. Lou says he wanted to walk the scene and Steve asks why. Lou says he and Clay came up together and he says he knows him better than anyone. Lou says something seems off.

He tells Steve he doesn’t think it was an accident. Steve asks why Clay would do it and Lou says he doesn’t know the reason but says there’s more to it. Lou says the trail is too wide for a casual fall. Steve says maybe she got distracted and fell. Steve says Clay risked his life climbing down the cliff to get to her faster. Steve says as cops they’re naturally suspicious but says it looks like an accident to him. Steve says sometimes bad things happen for no reason.

Shaw tells Danny it’s a lost cause and they have to just hope someone finds them. She says the body could get ripe soon. Danny starts to freak then tells her he’s very claustrophobic. She explains to him the science of what’s happening but he doesn’t get it. She says his body is lying and says he’s in danger but he’s not. Lou listens to Clay’s 911 call. Steve comes in and he plays the call for him. Lou says he hears no sounds of him climbing. Lou says another hiker heard Diane scream then nothing.

Lou asks why Clay wasn’t calling out her name. Steve now agrees this sounds strange. Lou tells Clay he has to take his statement but says it won’t take long. He asks what time they left for the hike, whose idea it was and if they took any photos. He says he called 911 on the way down. Lou says he must have been hysterical screaming her name and Clay says he screamed for her three or four times. Clay asks if that’s important and Lou says the parks want to know when there’s an incident.

Lou searches their hotel room. He sees a bottle of champagne and a note from Clay to Diane on their anniversary. Lou tells Chin, Kono and Steve the hotel room was a bust. Chin says he didn’t find anything in their finances. Chin says people believed IA when he was arrested for being dirty and the cops said it was just instinct. Lou tells them an anecdote about when he and Clay snuck out of training to go to a ball game. He says the TO was a human lie detector and Clay lied right to his face.

Lou says Clay lies with conviction and confidence. Lou says when he watched Clay working Renee alarm bells went off. Lou says he knows for sure. Shaw looks in her bag for an energy bar she keeps for emergencies then remembers she ate it last Tuesday. Shaw says evidence disappears quickly and says she’s going to start looking for evidence. She starts snapping photos after she unzips the bag. She has Danny record her as she talks. She notes the victims shirt is unbuttoned.

Looks like the killer tried to dig the bullet out. Danny sees a partial print from the button and they secure it in her compact to keep it air tight. Clay is with Renee when Lou comes home. Renee says Clay hasn’t eaten and she thinks he should lie down. Lou agrees and he goes to the bedroom. Renee asks what’s going on and where Lou has been.

He tells her that he thinks Clay may have done something to Diane. He asks if Diane ever complained about Clay or their marriage. She says no. Lou tells Renee when she’s sure he’s asleep he needs her to bring Clay’s phone. Renee asks what if he’s wrong and Clay finds out that he suspects him. Lou says he has to check with the ME on her autopsy and asks her to just trust him and do it. When the cops at the murder scene change shifts, one notices Danny’s car and the ME van is still there.

Renee goes to check on Clay. She sets down a glass of water and goes to reach for his phone but he wakes and grabs her wrist. She says she didn’t mean to wake him and says she just brought him some water. He talks about tossing and turning and how it kept Diane awake all the time. She tells him to go back to sleep and stares at the phone not sure if she should take it. Lou goes to talk to Max about the autopsy. Max says COD was blunt force trauma from the fall and no evidence of foul play.

Max says he has to rule it accidental barring other evidence. Shaw is straddling Danny’s shoulders trying to get into the top of the elevator but can’t. They hear Pua and tell him they’re stuck. Danny and Shaw are thrilled. Lou looks at the photos of Diane’s body from the scene. He’s ready to check accident on the official form when Renee shows up. He says he can’t prove it and she says his instincts have never been wrong. She says to trust them and keep on. She has the phone for him.

Danny and Shaw are released and Danny sends Pua off with the button to get it printed. Clay comes to the kitchen and asks how long he was out. He asks if she’s seen his phone. Renee says she hasn’t and asks him to check the living room. He says it’s not there either. He asks where Lou is and if he’s on a case. She says she doesn’t know. Clay asks her again where the phone is when Lou comes home and tells Clay he’s coming with him and says he’s under arrest for murdering Diane.

Shaw and Danny go arrest Richard Yaeger for killing Hurd, his business partner. They tell him they know he was embezzling. Shaw thanks Danny for letting her come along for this part and says she always wondered what it was like. He thanks her for calming him down in the elevator. Lou has Clay in interrogation and he says yesterday he never would have thought he would have killed her. He says Clay was counting on their friendship clouding his judgment and that’s why he brought her here to do it.

Lou says he used him and forgot that he knows him well. Clay plays dumb and says he loved Diane. Lou asks how he got her to the edge and asks if he posed her for a photo then moved in and pushed her over and watched her file and crack her head open. Clay asks why he would do that to his wife. Lou says the oldest motive in the world and shows him a photo they found on his phone of him and his girlfriend. Lou says he talked to his GF Leann and that he wanted to leave his wife.

Clay says he was just lying to his side piece. He says Clay always wants people to think the best of him and that’s why kill her instead of divorce plus he didn’t want to share his retirement money. Clay says he can’t prove it. Lou says he’s keeping him overnight while he flies back to Chicago to dig into his life and find what he needs. He says he will lock his ass up for this. Steve finds Lou outside and says he’s impressed he didn’t squash that little voice and let his friend walk. Lou says Diane was his friend too.

Lou goes home and sits on the porch instead of going inside. He looks at a photo of the four of them at dinner. Renee comes out and Lou cries in her arms.