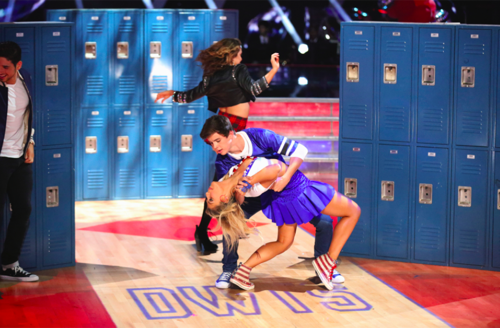 Tonight on ABC Dancing With The Stars returns for a second week and Hayes Riley and his professional dancing partner Emma Slater danced a Foxtrot routine to “The Is How I Roll”. On tonight’s episode the 13 couples dance to a song that commemorates the celebrity’s hometown. Did you watch tonight’s episode? If you missed it we have a full and detailed recap, right here for you. Did you miss any of tonight’s performance videos? If you did we have them all, right here for you!

On last week’s premiere episode of DWTS Hayes performed a Cha Cha Cha and the judges scored Hayes a 21/30 for his performance. Julianne Hough loved his performance and had this to say, “Okay, that just got me really really excited. Yu have a natural ability. Focus on your core strength and open your eyes and focus on Emma and you will be a little more in sync.”

Judges’ comments on Hayes’s Week 2 Foxtrot: Carrie Ann: “I have to say, I didn’t really like the motorbike. Yu can dance, you don’t need that stuff. You have such an interpretive quality to your dancing, you are telling a story and we are listening!” Julianne: “I couldn’t stop smiling. The thing you guys have when you are dancing is like this, it’s so nice to watch. You go from one move and you really hit it – and then you drop. Be very consistent from the very beginning until the very end.”  Bruno: “Watching you reminds me of a young Tom Cruise in risky business. And your arms, you have the arms of a ballet dancer. Don’t lean forward, don’t stick your bum out. Try to put a bit of rise and flow, if you get it right in one then you can translate it in to the others. Learn from Emma, she is very good.”

Watch the video below and let us know what you think, do you agree with the judges comments? Do you think Hayes did enough to avoid elimination tomorrow? Sound out in the comments and let us know your thoughts?