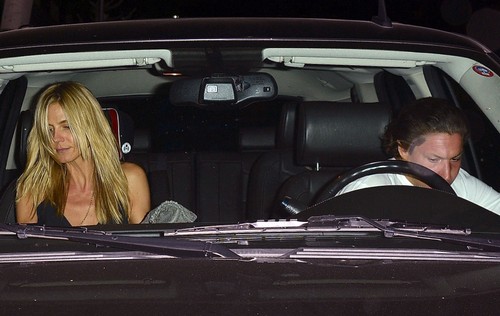 Heidi Klum has every right to be upset after her much younger boyfriend Vito Schnabel was caught apparently cheating on a date with Dakota Johnson. Fans of Klum are wondering if the supermodel is single and just didn’t bother to tell anyone.

Otherwise, it’s pretty wild that Vito Schnabel was caught out on a date with newly single Dakota Johnson. Is the 42-year old former Victoria’s Secret model keeping her mouth shut about a recent split with her much younger man?

Star magazine reported on Schnabel’s newest love interest. A date night between Dakota and Vita was caught on film and it’s pretty obvious the 50 Shades of Grey actress is really into the 29-year old art dealer. Johnson was seen getting very touchy feeling with Vito, who was more reserved while sitting at the bar in the White Horse Tavern.

The pictures of Schnabel’s date didn’t ever show her face but Star decided they must be Dakota Johnson based on her neck tattoo. The 50 Shades of Grey star has an identical tattoo and there’s just no one else who it really could have been. The White Horse Tavern girl definitely wasn’t Heidi though so no matter what, she’s probably pretty upset. Especially since news that Dakota split from Matthew Hitt broke ust days before the date with Schnabel.

Despite Heidi’s boyfriend not getting as grabby with Dakota as she seemed to want, he was definitely interested in the 26-year old daughter of Melanie Griffith and Don Johnson. Sources claim that Vito was seen leaning in close to Dakota and brushing her hair back.

It was definitely a very friendly encounter and if Schnabel is still dating Heidi Klum, she might be angry enough to send her much younger boyfriend packing.

So far there is nothing on social media to indicate a breakup between Heidi Klum and Vito Schnabel. That doesn’t mean much though because Heidi is old school and wouldn’t likely share that kind of news on the Internet.

Will Klum forgive Schnabel for stepping out with the much younger actress or will the former Victoria’s Secret model kick her art dealer to the curb?